12 Drinking Games that Have Kept the Party Going for Centuries

It’s Friday night and your friends keep playing endless rounds of beer pong and flip cup…yet again. Why not impress everyone with your worldly ways and propose something a little different? A unique drinking game automatically makes you the magical party unicorn at a get together, that’s just common knowledge. So here I am, yet again, bringing games for you and all your booze happy friends to experiment with. From all over the globe, these foreign drinking games are not only fun, but some of them are just plain crazy. Choose which one suits your group best, and you’ll have one more game to add to that night of drinking. Some you may be able to pronounce, others maybe not, luckily drinking is a universal language. These crazy drinking games are sure to get your next party started!

If you want to show off your physical talents as well as your liver function, you and your friends should play a competitive drinking game of Kasternlauf. Somewhat hard to achieve in the states since public drinking is normally a big no-no in most areas, it’s still something to keep in mind if the occasion happens to arise. All you need for this drinking game are teams of two and crates of beer. In your teams, you must carry around the crate of beer and finish all of them before you hit the finish line which is typically 8 miles. First one to finish their beers, and the line, wins bragging rights until you’re all brave enough to play again.

Said to be an ancient dice game that was first played in Iceland by a Sir Albert Farkle, Farkle is a game most of you probably played in 2007 on facebook. At least I know I sure did. Farkle is highly addictive, and once mixed with booze the fun gets taken to a whole other level, no wonder people love Vegas so much! What you’ll need is six dice. To enter the game you have to roll all dice and get three of the dice higher than 3. Once you’ve entered the game, for every pair in the six dice you roll, you have to take two gulps of beer. If you roll a straight (1,2,3,4,5,6) you must chug your drink. First person to be out of booze is the Farkle king or queen!

A game of skill, the ancient greek game of Kottabos might be the oldest in existence. Although it may be difficult to replicate presently, we felt we needed to include the game that grandfathered the art of drinking with the purpose of bragging rights. The game was generally laid out with couches set around in a circle. The players would then have to fling wine at a disc placed on a large metal stand in an attempt to knock it down. Some variations suggest that the player had to say what he desired when flinging his wine, whether an object or person. The game is suspected to have originated in Sicily but gained popularity in Greek culture during the 5th and 4th century BC. With everyone from Dionysius Chalcus to Astrophanes writing about it, you know Kottabos was the “it” game to play when the ancient Greeks wanted to get crunk. 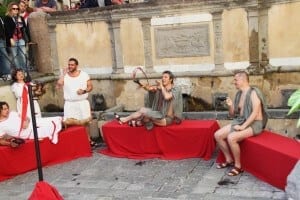 Although Schlafmutze is not technically a drinking game, why can’t it be? You can make anything a drinking game if you put your mind to it. This fun card game is really easy to play and is closely related to the game of spoons. You can play with two players, although the ideal minimum is three. One person is the dealer and always has 5 cards in hand while the other participants all have four. The dealer will circulate the cards while the last person will discard all that have been through the rotation. Whoever gets four of a kind first (Example: 4 Jacks) slyly puts their cards face down on the table. Once the other players notice they all need to put theirs face down as well. Last one to notice the winner has to chug their drink!

If Centurion the drinking game was a person it would be Janice Dickinson. This game is intense. 100 shots of beer in 100 minutes. It may seem like an easy feat if you’re an experienced drinker but beware, things can get crazy really fast. The key is to choose a low point beer and if you feel yourself getting sick after shot 47, you’re gonna have a bad time and should just stop. However, Centurion can be a fun game to earn bragging rights, this is a competitive drinking game should not be attempted by those who simply “enjoy a glass of wine after dinner” No, this is some next level….

Here are some tips and a helpful countdown clock  to help you get through this possibly traumatic experience.

Introducing Bartok, a card game that can be played as PG family-friendly fun or transformed into an R-rated liquor monster. The rules are essentially up to you and your friends. You start with a dealer who gives 4 cards to each player. Only the dealer knows the made up rules and can not talk about them, the players have to figure them out on their own. Whenever you break a rule you have to drink, as well as receive another card. The catch is that no one can talk about the rules, so essentially it’s the Fight Club of drinking games. When a person only has one card remaining they have to knock on the table and say “Bartok!” It’s like Uno with alcohol! It is rumored that it originated in Australian Mathematical Olympiad circles although that can’t be confirmed. Others say it began as an alternative to the card game “Mao” by those crazy kids at Cambridge and Oxford in the Uk during the 1970s.

Don’t worry, we didn’t forget about good ol’ ‘Merica drinking games. However this may be one you’ve never heard of. Thought to have started in the crazy Wild West when you had to keep your gun hand free for a possible shootout, the kicker about this drinking game is that once you play with your friends, you can never stop! 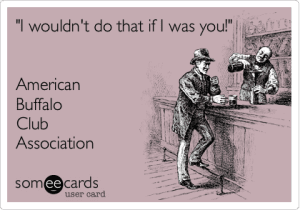 So naturally if you’re drinking with the same people in say 20 years, that’s how long the game lasts. Sign. Me. Up. Easy enough, the player has to drink with their non-dominant hand. If someone catches you slippin then you have to chug your drink. This game is fun because you get to obnoxiously yell at your friends when they mess up. Also the group of people you first begin playing with get to earn titles  as “Buffalos” and then it’s like you’re all in some secret drinking society and everyone else has no idea about why you’re all chugging and yelling about prairie herd animals.

Nothing is cooler to me than a historic drinking game and this Basque drinking game does not disappoint. This drinking game requires two dice, a table, a cup, and beer or sangria. The goal of the game is pretty much to have everyone but yourself drink. Gather everyone around and sit in a circle, the first player then rolls the dice in the cup and lays it flat on the table where only he can see the rolled number. That player then says what number he want the players to believe he has scored between the two dice, this can either be the truth or a lie. The next player has to decide if he believes them. If they believe the number to be true then they must say the number the first player said or higher. If the guesser believes the number to be a lie then the removes the cup and reveals the dice. If the first player’s score was what he stated or higher, the person who lifted the cup has to drink; if it was lower, the person who threw the dice drinks. After someone drinks, the score is reset.

The rules are a little detailed but it is easy to catch on and once you do it is a good game to whip out at parties.

Reigning from the UK, Pence (or pennying) is one of those games that you’re going to want to play EVERY time you are out with friends. Said to have originated all the way back to 13th or 14th century at The University of Oxford, Pence is fun and easy entertainment that you can honestly play anywhere. The rules vary from region to region but the general idea is quite simple and starts with a penny. The players should guard their drinks carefully because if the penny is dropped into your drink without you noticing then you have to chug! Additional rules include asking the unlucky drinker the year of the penny, if they don’t know or remember then they must finish their drink or grab a new one. 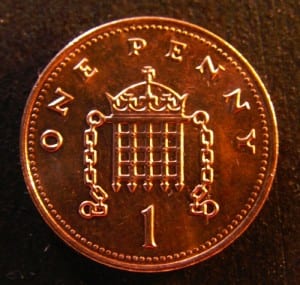 Coming all the way from Japan, Ping Pang Pong is one of those drinking games you’ll love to hate. Okay, I might only be saying that because I am terrible at games that involve memorization, especially after a few Sapporos. The basic rules of the game are as follows: One person begins the game by shouting “Ping!”, the person to their left must immediately shout “Pong!” then the person to the left of them must yell “Pang!” AND point to another person who will begin the process all over again. You can bet I’ll pull this game out next time I am at the bar, and then probably regret it. Did I mention that if you fail to do any of these rules quick enough everyone has to chant as you chug your drink and contemplate your life decisions? Because yeah, that’s what will happen.

Want a game where everyone ends up a winner? Or perhaps loser? With no real point, Bear Paw, a Russian drinking game, is deemed the most intense drinking game in existence and one that surely isn’t for the faint of heart. The basic “rules” of the game are pop open a beer and pour it in a glass mug, simple enough, right? No. Then you must pass said beer around and then after each sip replace it with vodka. This continues until the mug is filled with just vodka. Oh wait, we aren’t done here. Once the whole beer mug is filled with vodka you do it all over again…in reverse. It is said that the reason it is called Bear Paw is because you feel like you’ve been hit with one after you play. My body hurts just talking about it.