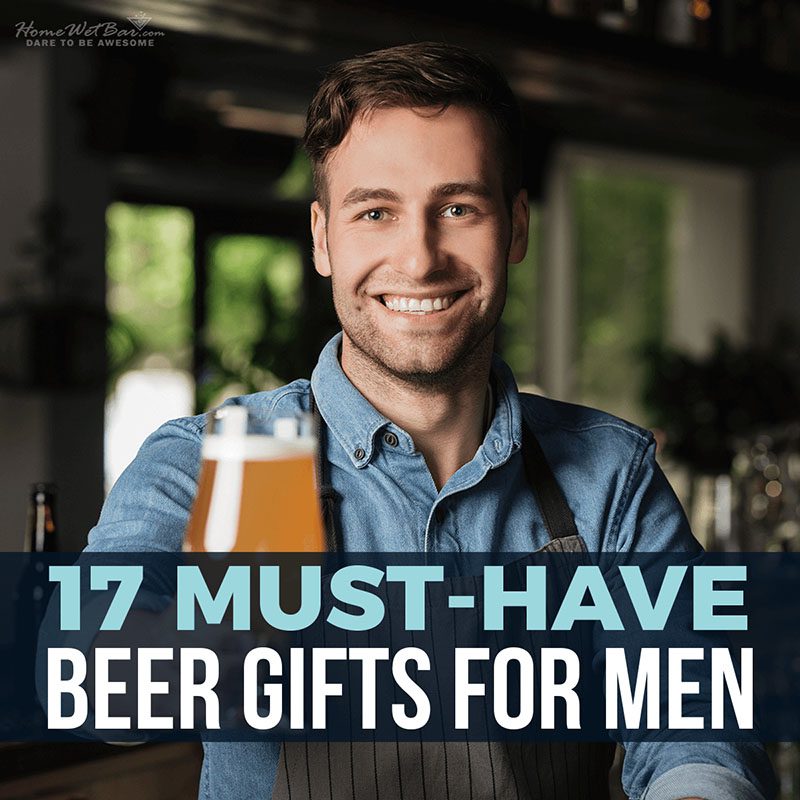 The Top Beer Gifts for Men Who Love Their Brews

When looking for beer gifts for men, you don’t want to just get them a six-pack of beer with a bow on it. But what kind of unique gifts are perfect for a man who loves beer? The ideal beer gifts for men are manly, personal presents that will enhance the beer-drinking experience! They’ll make him even more excited to enjoy beer than he ever has been before. Still wondering what to gift a guy who likes beer? Not sure if a growler is a good gift? Are you stumped on how to give beer as a gift? Wondering if a beer gift basket is a good idea? We tracked down the most incredible beer gifts for him that will more than satisfy his beer-loving heart.

There’s nothing he’ll find cooler than drinking beer from this incredible vintage German beer stein! Not only is the shape and lid of this stein so intricately designed to make it unique, but it’s also monogrammed just for him, which he’ll think is awesome. He’ll feel like a beer drinker from the olden days when he’s sipping his favorite brew from this stein.

The best beer gifts for men are gift sets that are so cool he can’t even believe it! This ammo can gift set is so gnarly, you know he’ll immediately be obsessed with it. He’ll think that the custom ammo can is fantastic because it’s the perfect place for him to store all of his favorite beer-related accessories. The pint glasses will make him feel like he’s at a real pub as he drinks his favorite beers from them. Pair this set with a six pack of his favorite beer and you’ve got the most amazing beer gift ever.

Is there anything that will make a beer lover feel more awesome than having his very own bar sign in his home? This handsome, customized pub sign will make his home bar or bar area feel totally awesome. Thanks to this unique sign, he’ll feel like the owner of a classy tavern or the best pub tailored just for him each time he and a few friends decide to have a pint together! It’ll always put him in a good mood and make him want to have a nice cold beer!

A Growler for His Adventures

There are few things a beer lover enjoys more than taking his beer on adventures with him! This gunmetal beer growler is one of the best beer gifts for him because it gives him the perfect way to transport beer no matter what he’s up to. Whether he’s on a road trip with some buddies, a picnic at the park with this significant other, or doing anything else where he’d want an ice cold drink of beer, he’ll be so thankful for this personalized growler!

Box Set of Beer Gifts for Him

A gift that is super manly and helps him enjoy beer? What could be better? He’ll love using these personalized, hefty mugs to drink beer from when he wants to relax after a long day or celebrate a special occasion with a buddy. This epic beer gift set is truly a phenomenal gift that will have him feeling like he’s sipping on his favorite beer on tap from his favorite bar.

The Perfect Place to Keep Beers

Picture this: he comes home from a long, tiring day at work. All he wants is an ice-cold beer to help unwind. That is when he remembers that you have him this incredible beverage cooler and stocked it with Modelo or Stella Artois. He’ll love keeping this cooler in his man cave or living room, stocked with several beer options, all nice and cold for whenever he wants to enjoy them.

Most Fun Board Game for Beer Loving Men

The best beer gifts for him are those that he can enjoy with his favorite people. This Beeropoly board game is an excellent gift idea that he’ll immediately be obsessed with! He’ll be so excited to invite friends or family over for a game night so they can play this fun game. So many awesome memories will be made that he’ll cherish forever! Include a six-pack of his favorite beer to make this gift truly one for the ages.

He’s definitely known as the guy who will bring the beer along to the party or barbecue since it’s one of his favorite things in the whole world. Make that job way easier and better with this custom wooden beer tote! Now, his beer will never be an inconvenience ever again! This tote will never fall apart and it even comes with a bottle opener, so he’ll have one with him, no matter what adventure he brings his brews on. Nothing he’s ever received as a gift will be as useful as this one!

You know there’s no doubt he won’t be obsessed with this custom growler and pint glasses set. It’s one of the most impressive beer gifts for men that any man will feel lucky to have. Not only are all the glasses and growler engraved just for him, but he’ll love that the growler can hold tons of beer that he can take on a camping trip or to a buddy’s house. The two pint glasses let him share with said buddy!

When it comes to collecting things, people tend to like to collect things related to their passions. That’s why you know any beer-loving man will think this beer cap map is incredible! He’ll want to hang it up immediately in his living room, home bar, or man cave and begin filling it up with bottle caps from his favorite beers. Any man will have a blast trying different beers and placing the caps inside this masculine decor piece on the wall.

One of his favorite things to do is enjoy delicious beer at a bar, and he wants to replicate that experience at home. This portable beer foamer effortlessly makes beer foam as he pours it from a can or bottle into his favorite mug. He’ll absolutely love the way the foam tastes atop his beer and how he’ll have real bar vibes, even when he’s at home!

This huge beer mug is something his beer-obsessed self has only dreamed of! It’s one of the best beer gifts for him because he’ll absolutely love the insane amount of beer that can fit inside this mug. Thanks to this awesome gift, he won’t have to get up for refills often, if ever! He’ll think this mug looks amazing, especially with the engraving, and he’ll want to use it every time he wants to enjoy some of his favorite beer.

A Sneaky Way to Transport Beers

Get him a beer gift that makes carrying his prized golden-liquid super easy and also a lot of fun! This briefcase beer carrier is a creative gift idea that he’ll love using whenever he can! He’ll love how everyone who sees him will think he’s hauling around important work documents, when in reality, he’s simply carrying his favorite beers to a buddy’s house or a get-together with family!

Ammo Can Set of Beer Gifts for Men

Help him enjoy beer and feel more manly than ever before with this ammo can gift set! He’ll love the stainless steel pint glass and how it’ll keep his favorite brews cold until the very last drop. Snacking on these beer nuts as he sips on his favorite beer will be a fantastic experience for him, and he’ll really like having a personalized ammo can to store the glass and bottle opener when he’s going camping or on a hunting trip.

Each Beer a Memory

As the biggest beer fan ever, you know he’d love this custom shadow box! It’s one of the most creative beer gifts for men that he’ll think is one of the best decor pieces he’s ever had. He’ll love having this displayed in his home, such as in his man cave or home bar, showing off all the different beers caps from brews he’s enjoyed. He’ll like that each cap represents a memory of him trying a new beer for the first time or enjoying one with a friend on a special occasion.

Even when he’s not drinking beer, he’s thinking about beer. That’s why he’ll love this beer soap set! He’ll love using these good-smelling soaps to wash his hands or in the shower, always reminding him of his favorite beverage!

A Simple, Yet Amazing Box Set

Beer gifts for him don’t have to be complicated. Sometimes, they’re as simple as a super classy gift box and handsomely engraved mug! He’ll think the customization and attractiveness of this set is incredible and will be so excited to use the mug to enjoy his favorite beer. The bottle opener will definitely come in handy time and time again, and he’ll definitely appreciate having a box he can store the bottle opener and his other beer accessories inside of!