The Glencairn Glass – Whiskey Innovation Four Millennia in the Making

Toward the end of the 1990s, dark liquor started making a comeback. Liquor stores began selling imported whiskies that hadn’t been easily available for decades. Celebrities spoke in interviews about their love for scotch. There was even that episode of The Simpsons where Bart learns to make the perfect Manhattan. So it’s fitting a resurgence in the popularity of whisky would give rise to a long overdue innovation in the world of glassware: the ideal whiskey glass. 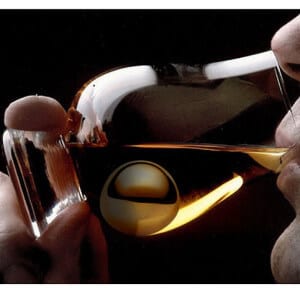 The world didn’t know we needed Glencairn whisky glasses until we had them. We’d consumed “the water of life” for over 4000 years without them. We were satisfied to step into a bar and drink a dram of spirits in a tumbler, or, depending on the type of establishment, a beer pint. Our scotch glassware at home might consist of re-purposed jelly jars, or an extra large shot glass. The Glencairn crystal company, led by their founder Raymond Davis, saw a need for something better: a specially designed whisky tasting glass, engineered to bring out the richness of its intended contents, in the same way a pilsner enhances beer, or a balloon glass opens up red wine.

Raymond Davis had the original idea for the Glencairn glass 20 years before, but good things come to those who wait, as they say. The company says that when his sons discovered his prototype, they consulted with five of the largest distilleries in Scotland, and the end result was the Glencarin whiskey glass that’s known worldwide today. According to Jack Bettridge in the September 2013 issue of Cigar Afficionado, the silhouette of the glass is inspired by the traditional nosing copitas found in the finest tasting rooms of Scotland.

The Glencairn company created a website solely for the glass that states that The Glencairn Glass went into production in 2001. The original design was a bit smaller than the one produced today, partially due to the more limited supply available at the time. As the world grew a larger affinity for scotch and other whiskies, the more bulbous size was developed. 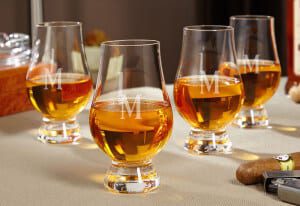 These crystal whisky glasses are ideal for proper assessment of the nuances for several reasons. First, the shape of the bulb at the bottom of the glass creates the perfect lens for investigating the color and texture of the spirit. Impurities can be easily spotted, and light is reflected in a way that allows a deeper understanding of the golden tones and hues. Also, the tulip shape allows the aromas to collect inside the glass. Stephen Beaumont points out in a 2011 article from Nation’s Restaurant News that the world’s leading connoisseurs consider aroma to be just as important to the tasting process as flavor. Finally, the narrow opening of the glass limits actually contact of liquor with the skin, preserving the integrity as much as possible until the last sip has been tasted.

Glencairn crystal has received extensive accolades for their unique whiskey glasses, including the Queen’s award for innovation in 2006. Sean Ludford of BevX noted that The Glencairn Glass was the first scotch glassware to be recognized by the Scotch Whiskey Association. Of course, awards and honors are one thing, but the proof is in tasting experience. These cool whiskey glasses are absolutely worth the try, and serve as an important tool when trying scotch, bourbon, rye, single malt, blended, or any other type of complex spirit. Just remember: our forefathers did not have the chance to enjoy whisky from Glencairn glasses, so it’s up to our generation to make up for lost time.