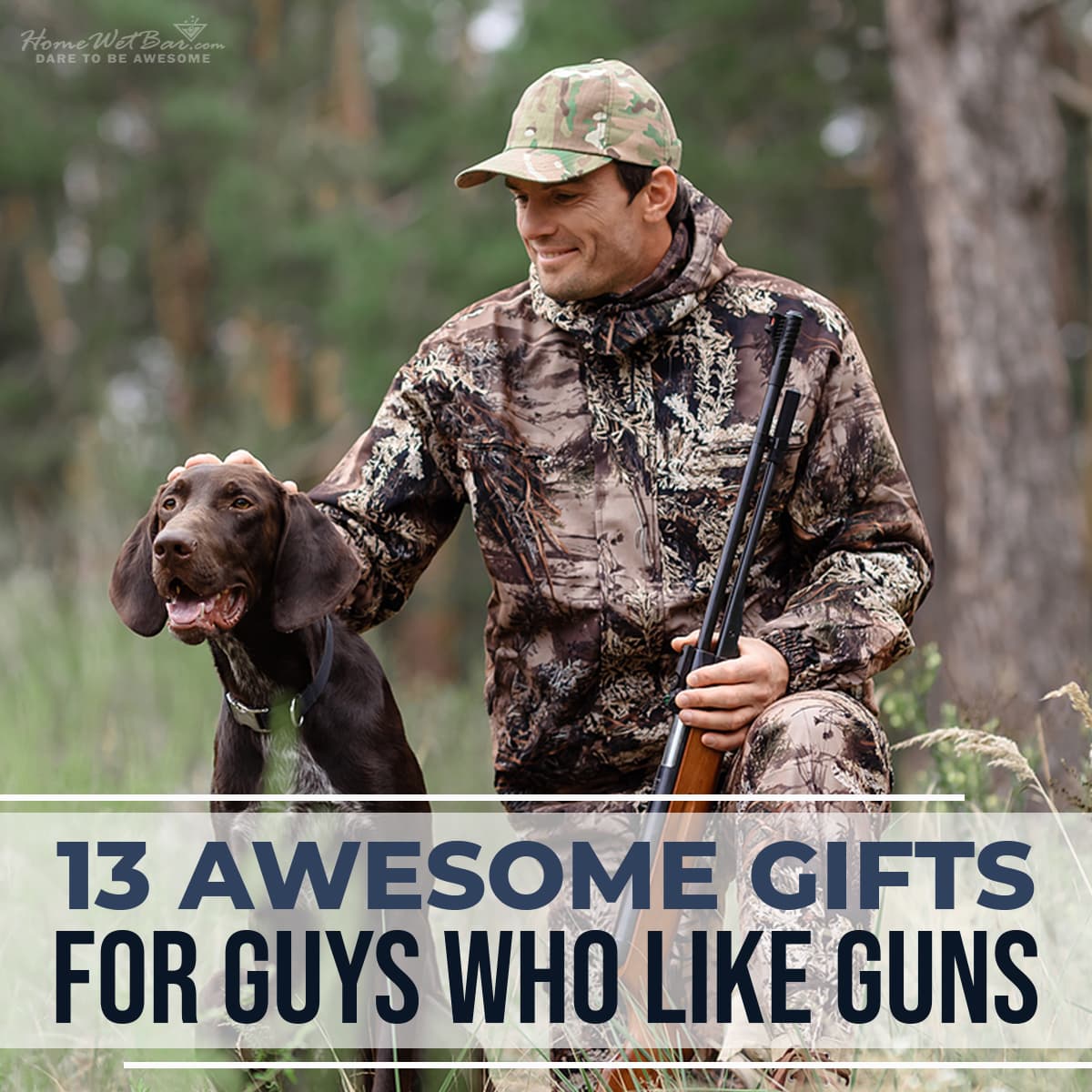 Check Out These Unique Gifts for Guys Who Like Guns

Are you trying to take aim at getting the gun guy in your life the best gift possible? Then you have come to the right place! Gifts for guys who like guns are not always as straightforward as they seem. You need to get him something unique but also practical, without doing the obvious such as more bullets. Instead, these gun gifts should last him a lifetime, this way when he goes to the range or sees your gift at home, he’ll always think about the time your sights were zeroed in on the perfect gifts for men who like guns.

He’ll never pour shots after a day at the range the same again once he gets this legendary bullet decanter gift set. When a guy is into firearms, he loves to integrate them into every part of his life, and you’ve just found the perfect way for him to enjoy his go-to whiskey and his love for guns seamlessly! Whether he pours a shot or he creates a cocktail, you’ll surely get a toast with this awesome gun gift idea for him!

Ammo Can Set of Gifts for Guys Who Like Guns

Part of finding gifts for men who like guns is all about getting creative. Instead of looking for another round of 9mm ammo, get him something he can enjoy every day just like this awesome engraved ammo can set. Not only does it come with snacks, but matching glasses, a real .50 caliber bullet as a bottle opener and a United States military ammo can. He’ll get plenty of use out of all the gifts, but how cool is that gift box? He can even fill it with ammo to take it to the range or use it as the most badass filing cabinet in his office.

A Perfect Whiskey Set for Shots

Put your sights on one of the coolest gifts for guys who like guns with an AR-15 decanter set. The king of rifles is here but now instead of serving up deadly accuracy at the range, it is serving you round after round of his favorite whiskey. This is the perfect addition to any gun lover’s man cave.

Kill those boring old coasters he has had since college and upgrade him to something he is far more passionate about with these epic 12 gauge shotgun shell coasters. There is no better way to protect his table than with one of the most badass shells on the market.

He will never stop making shot puns with a pistol decanter with shot glasses as one of the ultimate gun lover gift ideas. After all, when people think of guns, there are few as iconic as a revolver. From the Old West to the modern era, the revolver has reigned as one of the most recognizable weapons out there, and now it is in his home bar giving him delicious shots of whiskey or bourbon!

While some guns may come and go in his life, one thing that has always been a staple has been his slings. Get him a gift that will last him for decades with a custom leather sling perfect for any of his rifles. Personalized with anything you like, he’ll know you went above and beyond to find him not only a great-looking gift but one that is 100% unique to him too!

Take the cool factor of gifts for men who like guns and crank it up a caliber with this custom whiskey bullet stone gift set. This is an incredibly unique and fitting gift for a man who loves his guns almost as much as he loves you. Simply have the stones chilled ahead of time and he won’t be able to wait to go and grab the Jack or Jameson to try out just how cool these whiskey stones truly are!

The most reliable rifle in the world is now the most reliable decanter gift set for your husband, brother, father, or any other man who loves guns! Perfect to break out when he has an action movie on, he’ll want to immediately share a few rounds (get it) with his friends and family as he watches action movies that feature this iconic weapon!

When you’re searching for gifts for men who like guns, it is unlikely that you are going to get him that next rifle he has been eye-balling because you know he is going to want to make sure every detail is perfect. Instead, a custom and rustic hunting sign is just what he needs. It is a great way for him to incorporate his passion while also having some home decor of his own. You can already see him hanging this sign up as soon as he gets it in his home bar, office, or garage.

Shotgun Set of Gifts for Men Who Like Guns

Give a nice spread when you give him a decanter set that comes shaped like a shotgun and even has shells in the glasses. This is perfect for the man who knows how to breach and clear a room or who can’t get enough of his turkey hunts. Now, when he’s kicking back and relaxing at home between times behind the trigger, he can plan out his next hunt or training exercise while he has an Old Fashioned in his hand, poured right from this awesome gift set!

For a Shot of Energy

Keep the perfect amount of coffee in him with the most American blend you can find, Black Rifle coffee. With dozens of different flavors, there is surely a bag he won’t be able to resist. And you know nothing tastes better for an early morning hunt than a bit of freedom in his cup. Not to mention, with this two-bag gift set, he’ll also be getting a grenade mug. How cool is that?

Hunt for the Best Memories

Some guys repack their shells, some leave them behind, while your man likes to hold onto those special ones. Give him a place to display the shots that meant the most to him with an engraved shadow box. These are amazing gifts for guys who like guns because it is a masculine way for him to show off as well as remember spent casings that are tied to a great memory. Whether it was the time he bagged that buck or one of the best days at the range with you, he can easily display his happiest and proudest moments, now.

Toughest Tumblers For Dudes with Guns

Not every single gift for a gun lover has to be dripping in bullets, some just need to match their tactical taste, just like this personalized tumbler set. With a sleek, matte black and stainless steel design, now their cocktails will be as badass as his AR-15s. When you’ve got a gun nut who is in need of a gift, consider helping him unwind after a long day at the range with his own tactical tumbler gift set!