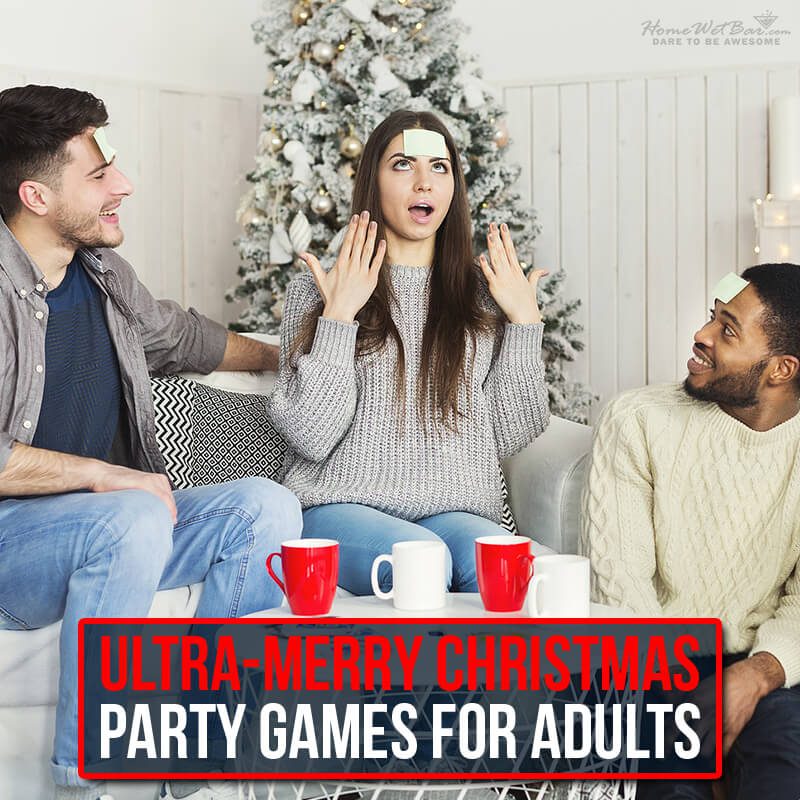 As future generations of holiday revelers embrace new trends in celebrating, it’s important to pass down a tradition that truly defined our generation: holiday party games. These Christmas party games for adults weren’t born on the internet, but in the living rooms of people stuck inside over a three day weekend, either because of wintry weather or being too drunk on eggnog to drive. Although drinking isn’t 100% necessary for some of these holiday party games, there’s little to no reason not to take shots while you play.  Whether involving timeless movies, playing cards, or a good old-fashioned Santa hat, these games for Christmas parties will bring joy, holiday cheer, and maybe the teensiest hangover. Enjoy responsibly! 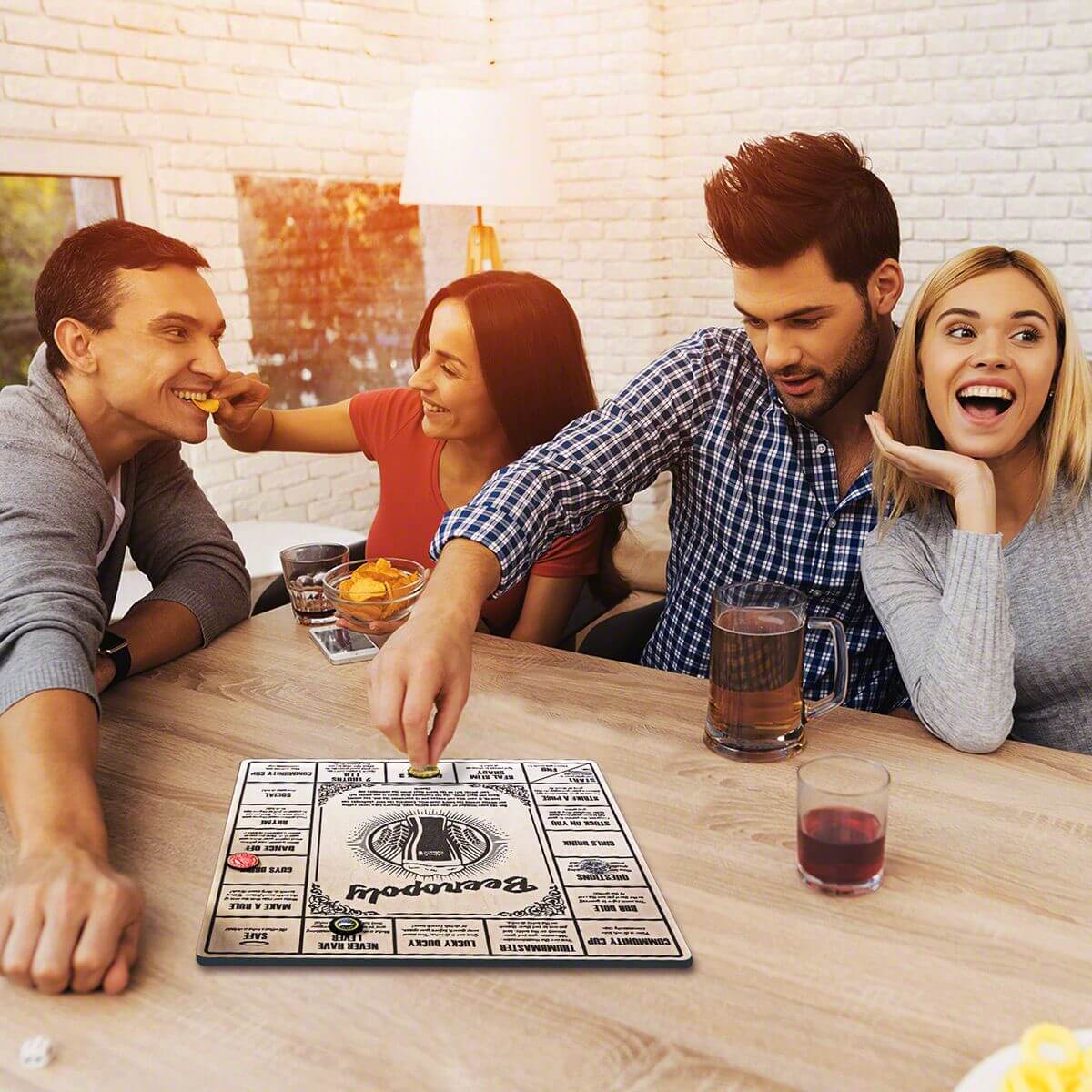 Around 3500 BC, the first board game was invented, and since beer brewing was discovered 400 years before that, we like to think that it was also a drinking game. The Beeropoly beer game is easy to play, and the directions are printed right on the board. With classic drinking game rules like a dance off and community cup, you’ll relive your college years every time you sit down for another round. You can even use the cap from your current beer as your game piece. Genius! 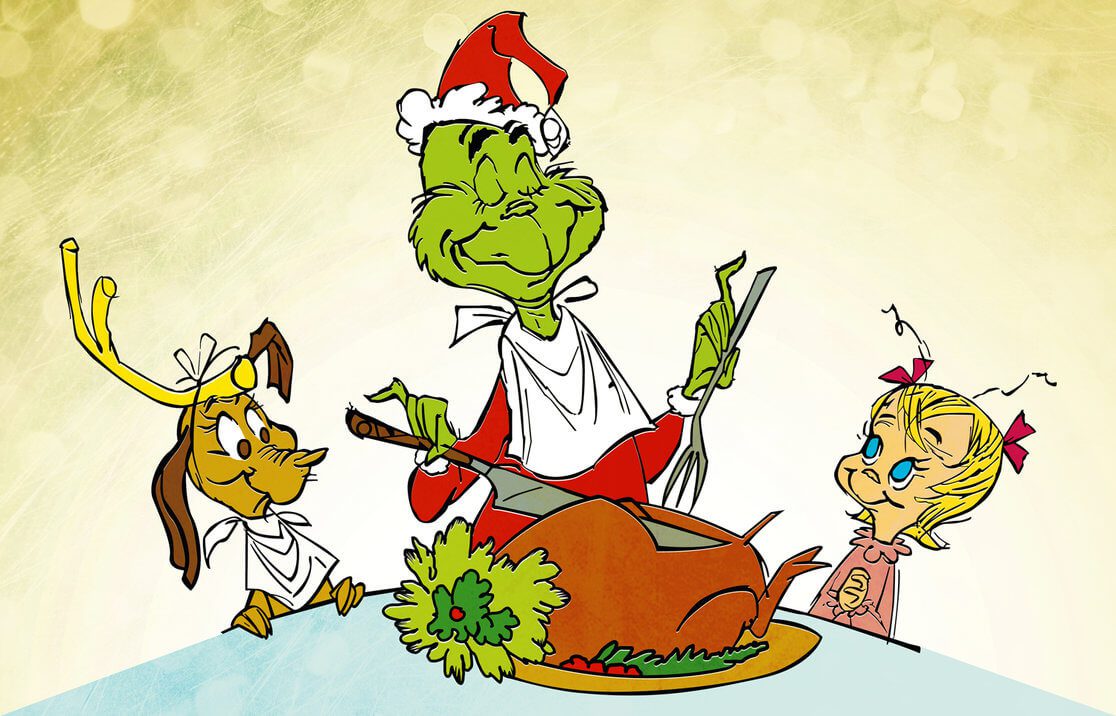 The first of our Christmas party drinking games follows the standard pattern of movie-derived “when this happens, drink booze.” So the rules are incredibly easy, and if you have cable TV or Netflix, you probably won’t even have to search for the DVD.

To play the How The Grinch Stole Christmas Drinking Game, you need to split up into two teams: the Whos and the Grinches. Each time the Boris Karloff (the narrator) says the name of your team, take a drink. So for example, when he says “Whos down in Whoville,” that team should drink twice. Don’t worry, Team Grinch, you’ll catch up during the theme song. This movie is still highly entertaining, even for grown ups, so if you want to host a fun night in December, you don’t need many other adult Christmas party ideas. 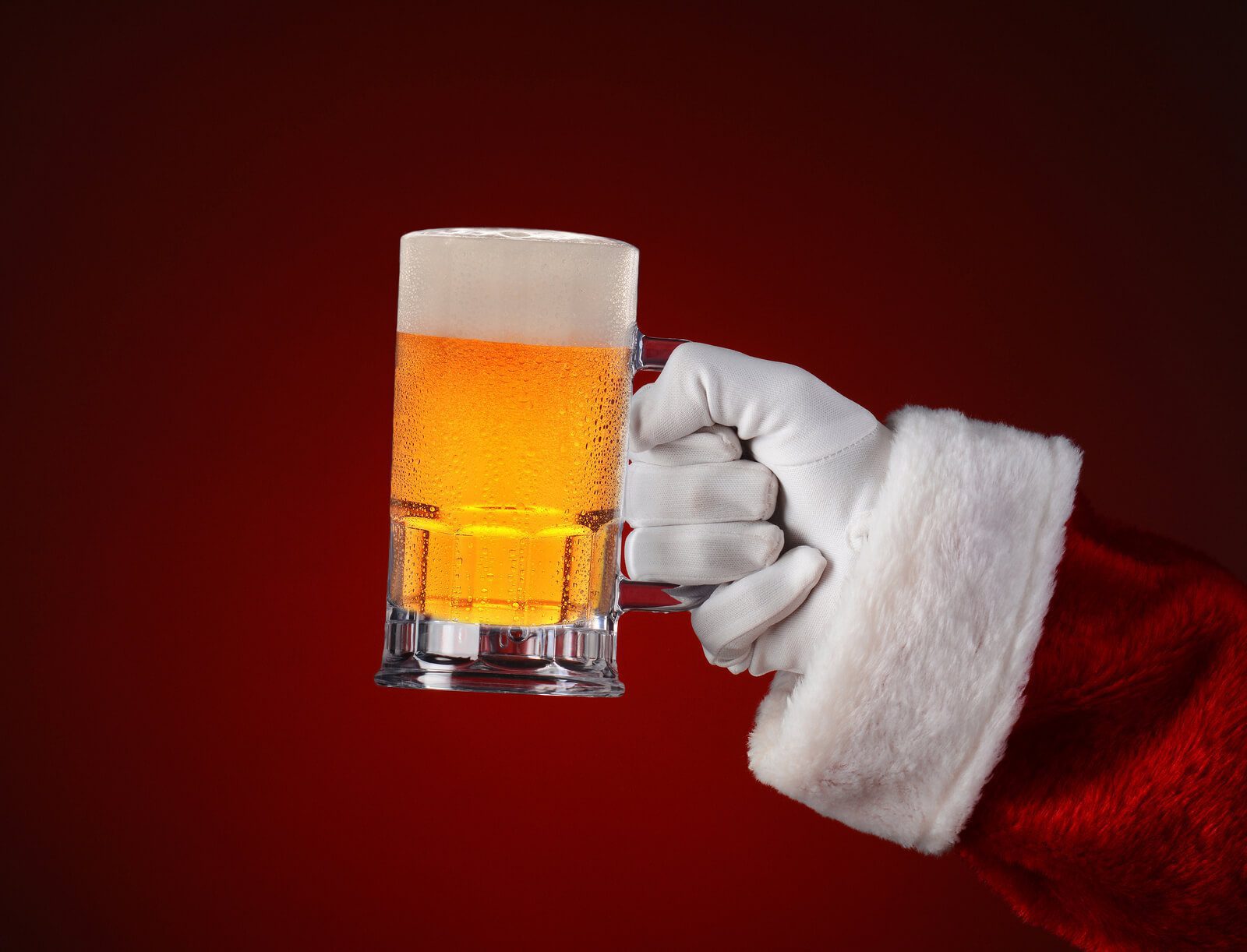 Aside from the watch-and-take-shots movie inspired variety, the other most popular play format is drinking games with cards. If I remember correctly, one of my first times getting drunk involved Malibu, Pepsi, and the most royal of alcohol games, King’s Cup. That’s why I was so excited to see this festive update entitled Santa’s Cup. Different actions are associated with each card, so you probably will need to print out the rules. Even if you know the original rules by heart, as most of us can attest, write them down anyway,  or at least take a screenshot on your phone. You also can’t forget the completely necessary humongous cup.

What’s Stuffed in that Stocking? 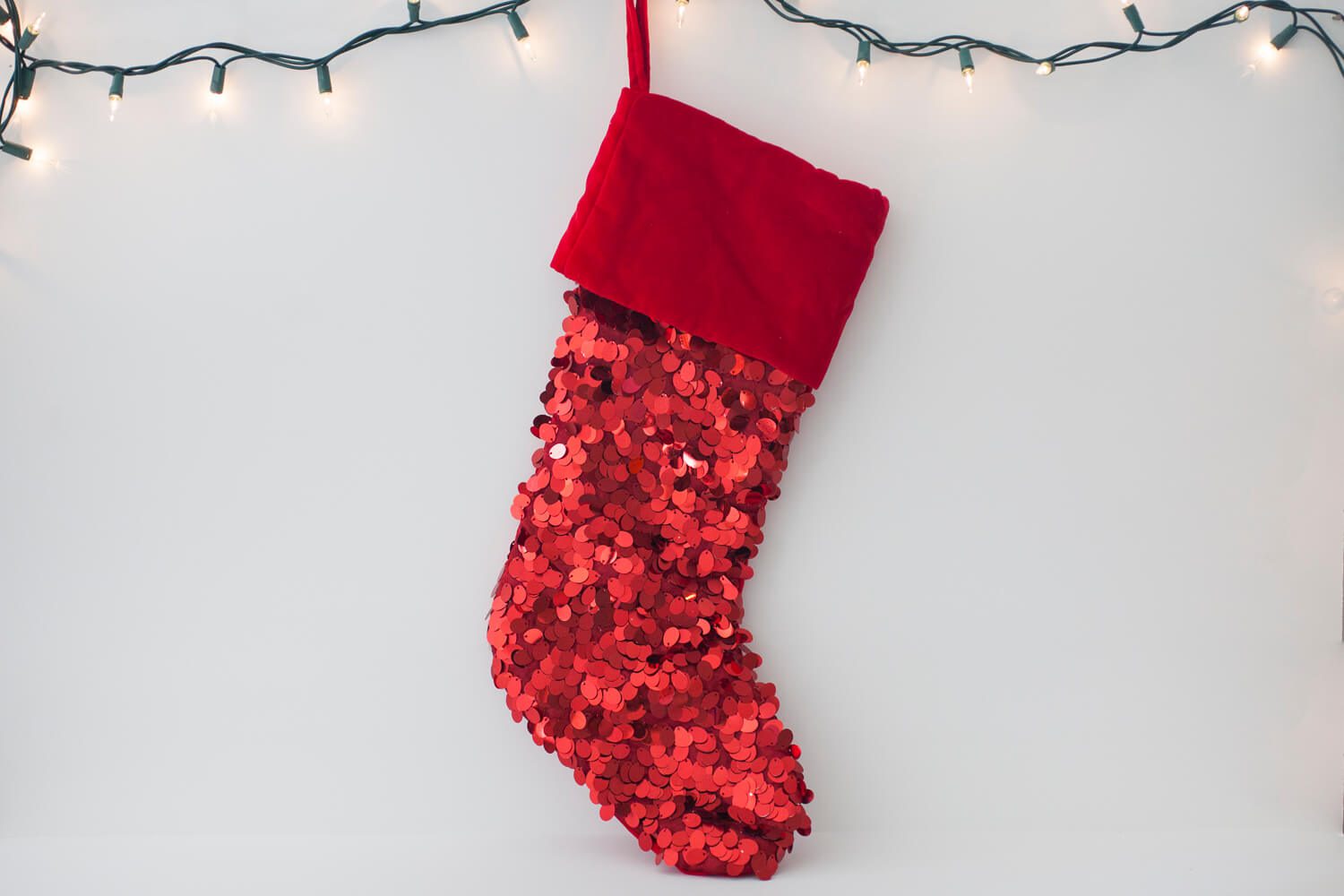 A variation of that thing you always play at Halloween parties where you put cold spaghetti inside a box, shove someone’s hand inside, and tell them it’s internal organs, What’s Stuffed in that Stocking? is one of the xmas party games you can play just about anywhere. Even the stocking is optional TBH. As if you hadn’t already guessed, you put something random in a stocking, and someone has to guess what it is. Anything will work, although I’ve discovered the more mundane, the better. People’s imaginations run wild when they’ve got packets of Splenda and a contact lens case in their stocking. To involve drinking, you take a shot if you guess right. Bonus shot if you are wrong, but so wrong that the rest of the room laughs at you. If you are inclined to get serious about your Christmas party ideas for adults, pre-stuff your stockings, and write cryptic clues with obscure holiday references.

Here We Come a Drinking & Caroling 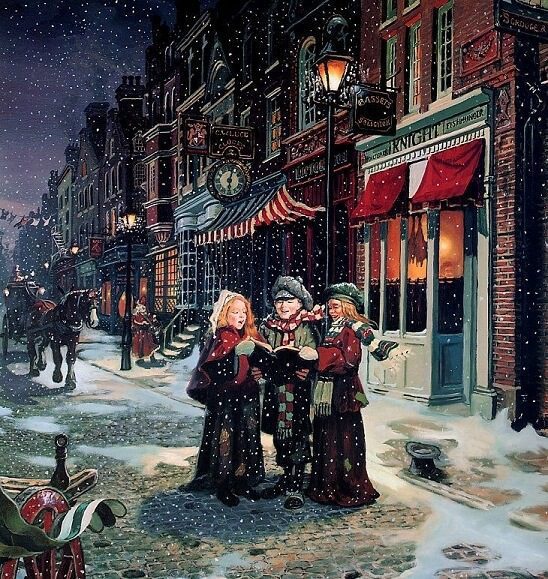 Some games to play at Christmas parties are not work appropriate, but this one could totally make the list of safe office holiday party games. To play Here We Come a Drinking & Caroling, everyone sits in a circle (holding hands with co-workers not required). The first person sings the opening phrase of a Christmas song, then the person to their left sings the next phrase, and so on. You keep the song going until someone screws it up. When the song derails, the person who got the words wrong must drink. If you make it to the end of the song, everyone drinks! 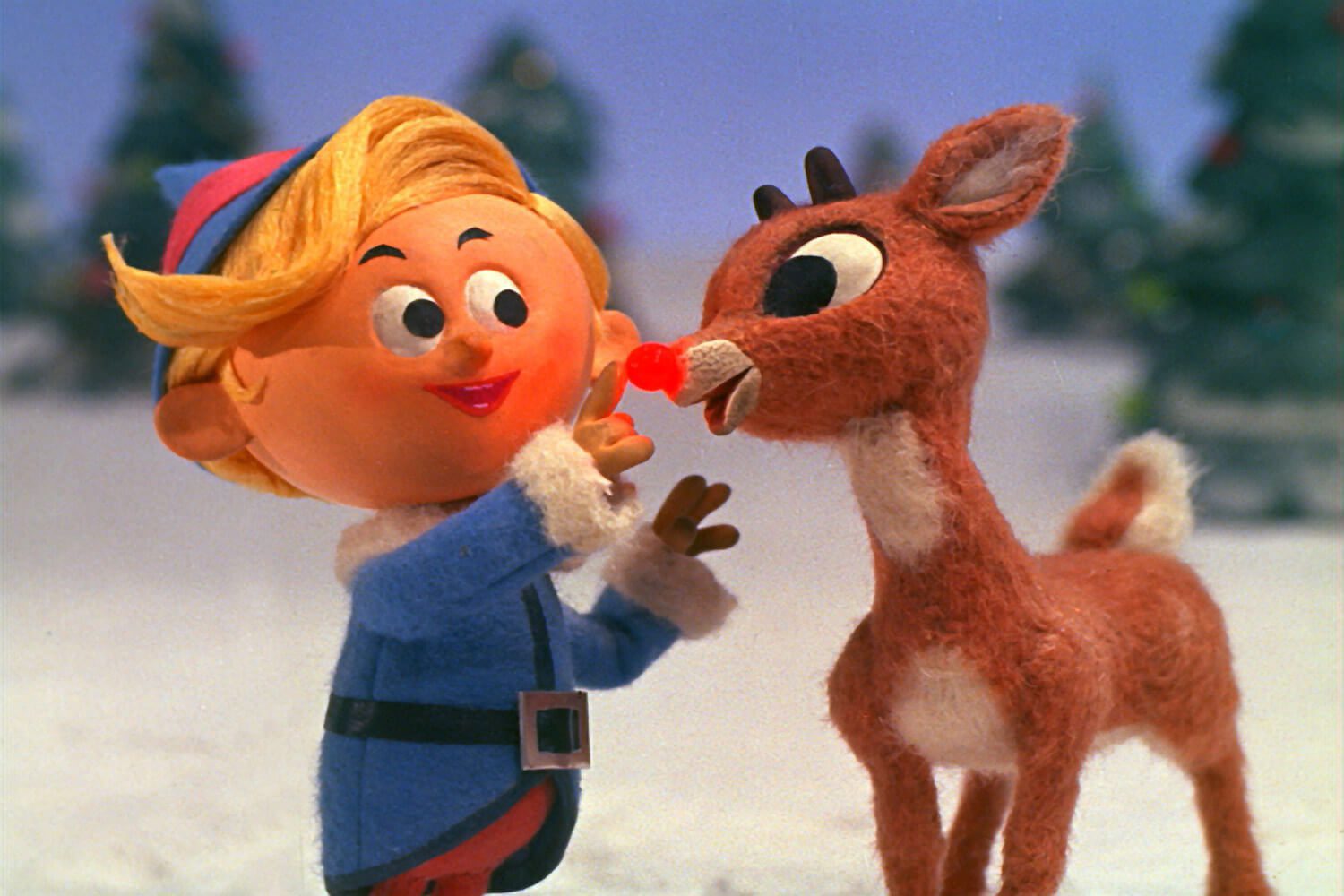 This is one of the best Christmas movie drinking games because, since the animated feature is so short, you can play it more than once in a night. Here’s the rules of the Rudolph the Red-Nosed Reindeer Drinking Game:

There are so many recurring themes in Rudolph, that the custom rule possibilities are endless. We also recommend posting the rules next to the TV, and playing the movie on repeat, eliminating the need for all other games at Christmas parties.

A recent addition to the canon, The Santa Hat Drinking Game is one of the Christmas party games for adults that requires little to no effort. You put a hat on the corner of your TV, and every time it looks like a character on the screen appears to wear it, you drink. It doesn’t matter what you are watching; you can even combine this method of play with other funny drinking games and really go on a blitz. Here’s an idea: Put the Santa hat on the TV, turn on an old episode of Law & Order, drink whenever a character “wears” the hat, and take two shots each time the hat wearer is Sam Waterston. 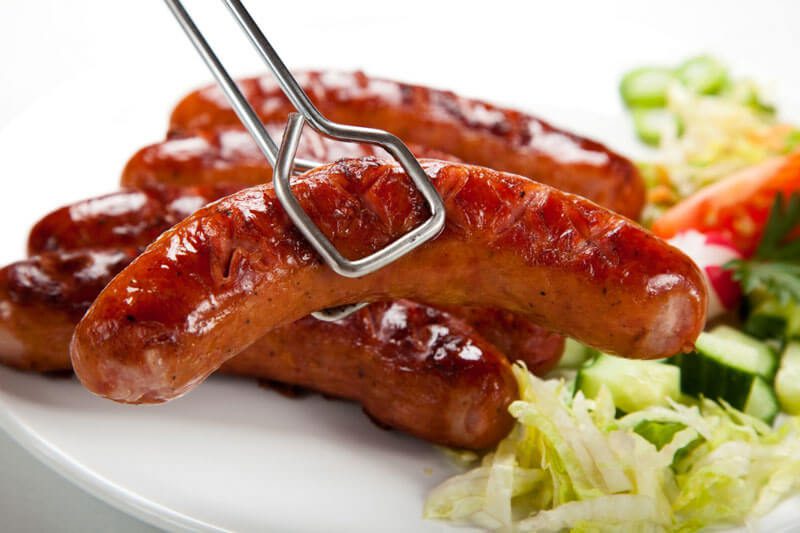 It’s time to get silly! Next up on our list of adult Christmas party games is Holiday Sausages. I bet you can guess where this is headed. You’ll need two teams. Seat everyone in parallel row across from each other. A person from team one makes up a question, and poses it to the person sitting across from them. No matter what, that other person has to answer with, “Holiday sausages.” Anyone who laughs has to drink. Since this is one of my favorite games to play at Christmas parties, I’ve created a list of go-to questions that almost always get a laugh: 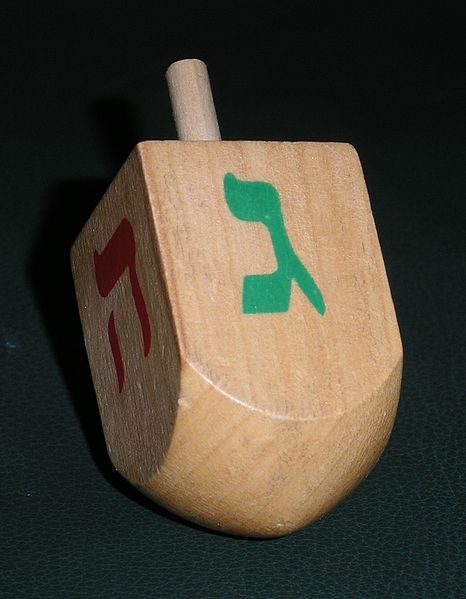 In an excerpt from the coexist bumper sticker of holiday drinking games, traditions come together as Christmas and Hanukkah collide. In December, you can find a dreidel at just about any department store, and if you can’t, a marker and an old box will let you create your own. To play this drinking game, you spin the dreidel, and take shots accordingly. Mazel tov! 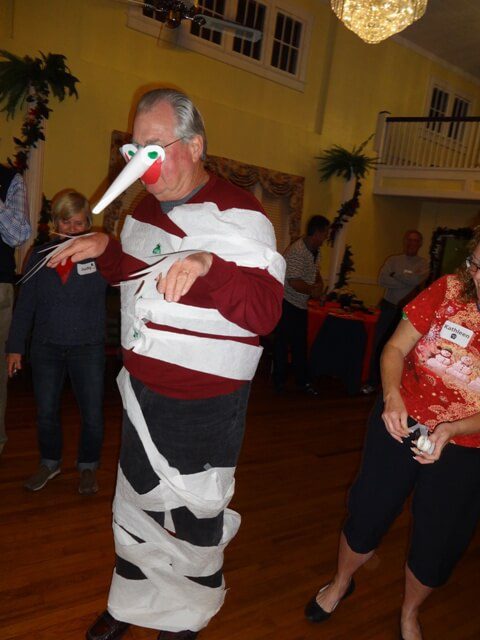 Not all adult Christmas games have an exact set of drinking rules, but sometimes that’s a good thing. The prime example is the Toilet Paper Snowman Challenge. Divide up into teams of 2 to 4 players. One person is the snowman, and the others are the builders. The object of the game: create a ridiculous looking snowman by wrapping your friend or co-worker with toilet paper. Other decorations are allowed, as long as no clothing or family valuables are damaged. Prizes given for most realistic, most pathetic, and best use of found objects. Also a safe addition to your file of office Christmas party games. 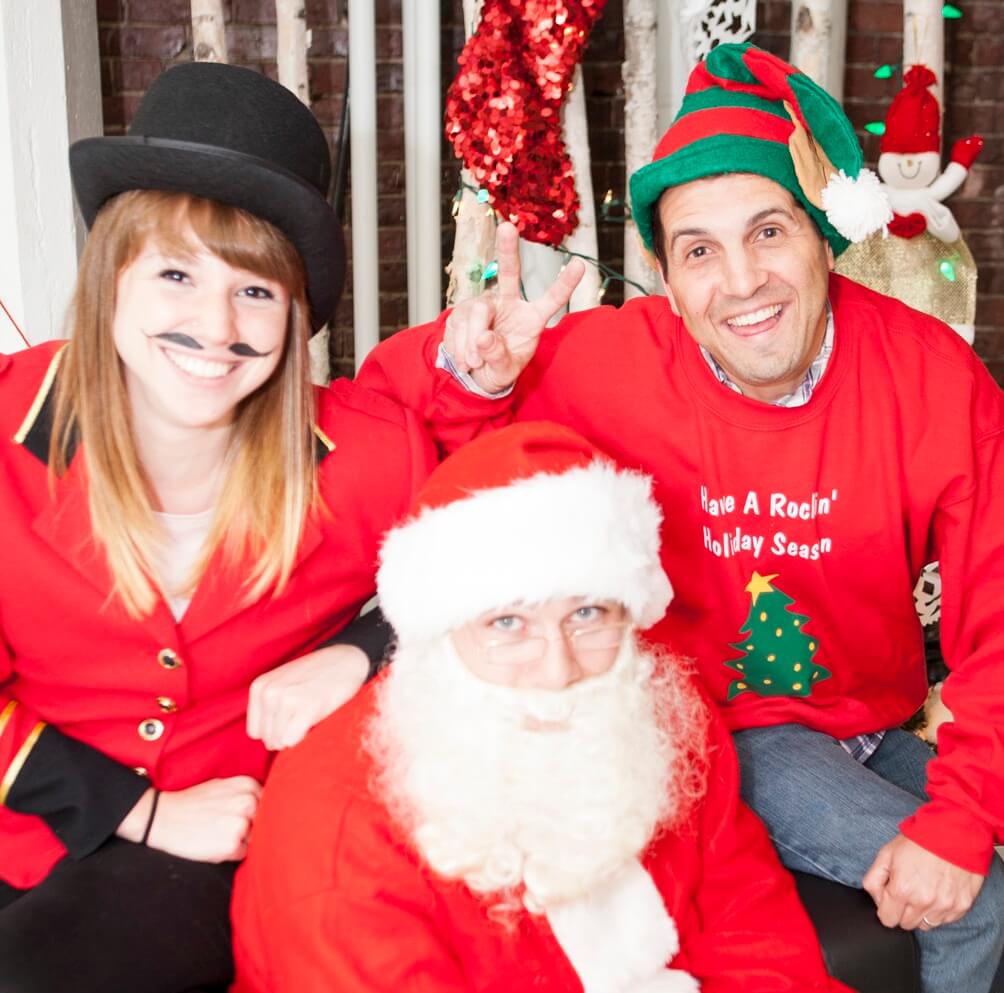 The last of our Christmas drinking games doesn’t require a movie, a stocking, or bathroom toiletries. To play The Ultimate Christmas Drinking Game, all you need is booze and a holiday gathering to attend. With rules like, “Take a drink when someone gets passive-agressive,” and “When someone starts crying, just chug,” it’s a go anywhere, play anytime option.