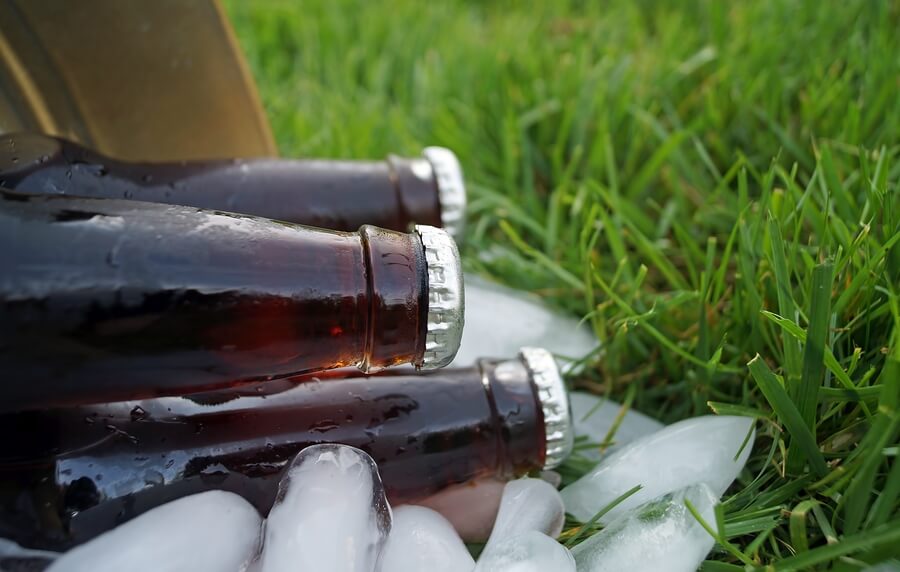 There’s something about beer and running that inherently goes together. With other fitness activities, there’s not as much mingling of sweat and stouts. You would never see people lining up for a Wine-and-Spin class, or Tequlia-CrossFit, but when it comes to pounding the pavement on foot while consuming cold, delicious beer, it just feels right. While there are some proven health benefits that have been found between beer and running, it’s the social nature of both that really seals the deal. Drinking beer is more fun among a group of friends, and so is running, so inviting people together for a 5K and a few brewskis makes perfect sense.

What is a beer run? Although the format changes from event to event, it’s basically a standard foot race, about 3 miles, suitable for running or walking, but with a beer twist. Some races have you start by chugging a Guinness, others set up beer stops every kilometer along to route. One thing you’ll always find, thankfully, is a fresh brew after you cross the finish line. I’ve done a few beer runs myself, mostly beer 5Ks, and all have been incredibly fun. There was one occasion where I took a shot of bourbon during mile 6 of a half marathon, and that is less advisable. For your consideration, here are the best beer run 5K races in the US. Find the one closest to you, crack open your coldest beer, and start training today.

If you find yourself bored with hitting urban pavement, you will want to give the Blood Sweat and Beers Trail Run a shot. Nestled in the American River Canyon, you find plenty of boulders, dirt, hills, and wildlife. Be sure to pick up a pair of trail running shoes for this one. This race includes free barbecue, and beer from Sacramento’s Hoppy Brewing Company. Nature lovers should take note, as this race benefits the organization, Protect American River Canyons, an Auburn-based group dedicated to the preservation of the resources of the North and Middle Forks of the American
River and its canyons. 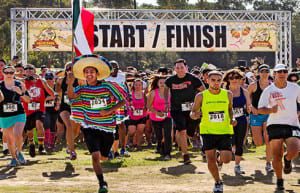 I’d call this race a ménage à trois of running, tacos, and beer, but that would be too many mixed cultural references. The Tacos and Beer 5K is an emocionante race, which includes fiestas and the beginning and the end, finishers’ medals, as well as two tacos and a beer for everyone who participates. There’s also awards for fastest runners, and the best Cinco de Mayo costumes. Guests are encourages to “run, walk, eat, drink and FIESTA.” 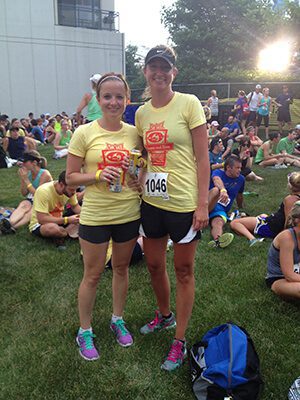 This beer race has been around for a while (over 6 years, which is a lifetime in beer run years). With a finish line near Soldier Field, home of the Chicago Bears, at the Burgers and Beer 5K, you might even catch a glimpse of Lake Michigan while you run. As with many 5K, part of your registration fee goes to charity, in this case, Special Olympics Chicago. You can pick between a 3 or 5 mile race, and each runner gets free Goose Island beer, and your choice of burgers from an assortment of local restaurants. Somebody hand me a Honkers Ale!
Pic: 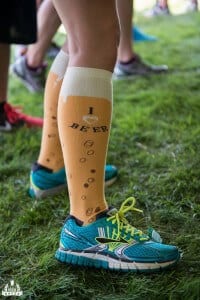 The Craft Brew Races are a series of events across the country that celebrate craft brewing, and running around with your friends. All beer is purchased directly from the breweries, helping support the craft beer industry. Each event features a 5k brew run, followed by a craft beer festival with a beer tasting and live entertainment. Hosting beer runs from Portland, OR, to Austin, TX, to Savannah, GA, the Craft Brew races are accessible to nearly everyone who is willing to drive a short distance for some fun. 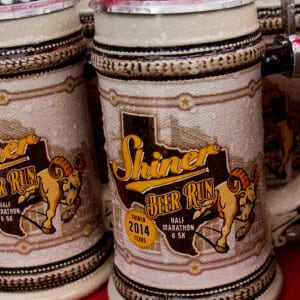 Hosted by “Cleanest Little City in Texas,” the Shiner Beer Run is your chance to jet through the hills of South Texas, and discover a small piece of history. The historic Spoetzl Brewery is the crown jewel in a tiny town that began as a 250-acre donation to the railroad right of way. This race includes a half marathon, as well as a 5K. Honestly, I have no idea who all these people are running around drinking beer and doing half marathons, but there must be plenty. Race participants get a cool shirt, and if you finish the half, you get a one-of-a-kind bottle opener finisher’s medal. All runners receive entry into the a Shiner-beer-fueled after party with live music, brewery tours, and Texas grub. 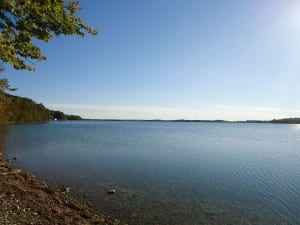 This beer 5K not only starts and ends at Tyranena Brewing Company, but includes routes that give you a beautiful view of Rock Lake. There are two distances, a half marathon and a shorter race, so you get to decide if you prefer more running or more drinking. In addition to the standard t-shirt, your registration includes two free beers and a complete free dinner. The extra special bonus at this beer run is the free tour of Tyranena microbrewery after the race, which hopefully includes a few more free samples. 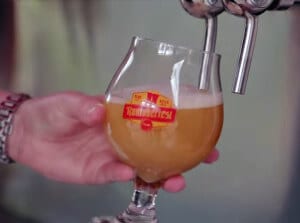 My first beer run was the Runtoberfest 5K. Initially, I just registered because of the awesome name and free beer stein, but ultimately it sparked my love of running for free beer. COOP Aleworks sets up a beer garden at the finish line, and runners line up to fill their custom beer steins with the craft brew of their choice, and stick around for live music. First place male and female runners get engraved glass beer boots as trophies, and best costume gets one as well. 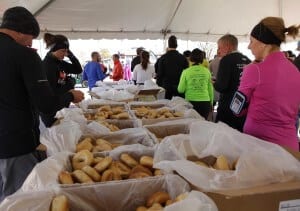 Definitely eligible for credit as one of the original beer runs, with a tradition that goes back 22 years, the Beer & Bagel Off-Road Race Series serves as the go to event for thousands of runners, beer drinkers, and bagel enthusiasts. This USATF sanctioned event gives runners one of the most awesome race shirts we’ve seen, emblazoned with “I’m a drinker with a running problem” along with a free bagel, free beer, and wait for it… free chili! Lots of tailgating occurs before and after the race, so don’t forget to bring your ice chest and some koozies. Don’t be startled by surprise visits from Sasquatch. 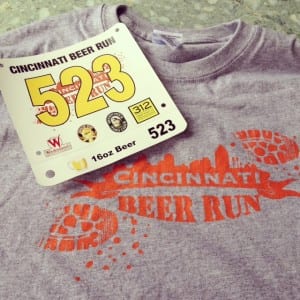 If you’re just starting out, or just not interested in that much running, the Cincinnati Beer Run is the one for you. At only 2.5 miles, it’s a classic fun run 5K. It’s also great for travelers, as the race starts in Newport, KY, goes across the state border into Cincinnati, and circles back, with festivities going into the night on the Newport Levee. Craft beer is served every half mile, with another pint when you finish. They even offer gluten-free beer, for, you know, those people. For me, the best feature of this beer 5K is partying on a levee, which sounds like what all cool kids should be doing everyday. 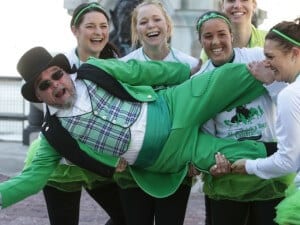 Held annually around St. Patrick’s Day, this Indiana emerald of a race raises money for, not one, but multiple local charities. Various local breweries bring the goods, including one of my favorites, Upland Brewing Company. The Shamrock 5K Beer Race starts with a toast where everybody downs a few gulps of craft beer. Brilliant. Every kilometer you pass gets you another big shot of brew. When it’s over, runners get a medal and a pint-glass filled with their pick of several local beers. Last year, the race took place on Georgia street, a go-to area in Indy for food trucks, so take some cash and an appetite with you, as well. 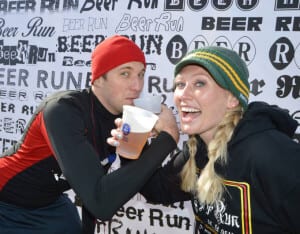 Here’s the beer run that some of you have been waiting for. The Milwaukee Beer Run has not only a 5K course, but a .05K course, for those who like fun 5k races but are ready to get to the finish line and have some beers. An especially full swag bag comes with this race, including a full-zip hooded sweatshirt, custom pilsner glass, free beer from St. Francis Brewery, free professional photos, and a Beer Run Club membership. I’m not sure what the membership includes, but I definitely need to join. 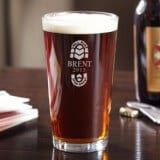 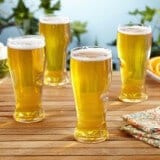 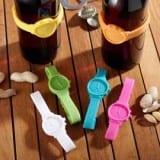