Gift Ideas » Home Bar Gifts » What are Whiskey Stones? We’ve Got the Lowdown. 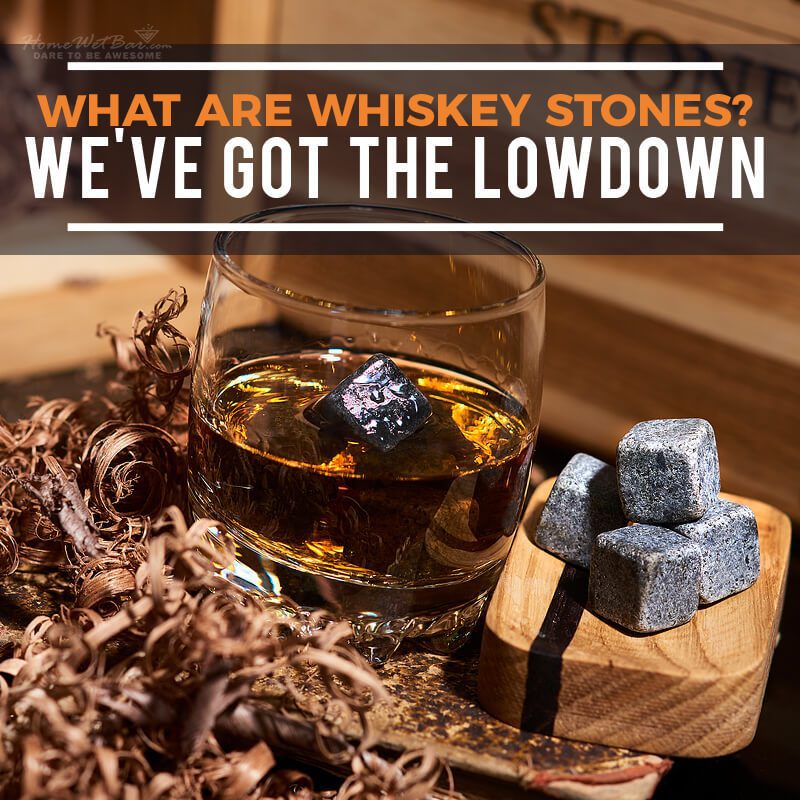 What are Whiskey Stones? We’ve Got the Lowdown.

The Ultimate Guide to Whiskey Stones

When it comes to drinking trends that can weather the storm, whiskey stones have miraculously floated to the top. They’ve been on shelves for almost a decade now, and though they once occupied only a small space in the whiskey tasting toolbox, they’ve now moved front and center, standing tall alongside crystal rocks glasses and angostura bitters. Some purists may be concerned about altering or even potentially tainting the flavor of their favorite liquor; however, with whiskey stones, they do not need to worry. These fantastic whiskey gift sets with whiskey stones simply chill the drink, without watering down, over-cooling, or altering the flavor in any way. So check out these awesome whiskey stone sets that are perfect for beginners and aficionados alike!

What are whiskey stones made of? Whiskey stones are typically made of non-porous soapstone.  These stones can be chilled to keep your drink cold without diluting the drink itself. They are a deceptively simple bar tool that perfectly blends form, function, and a whiskey drinker’s affinity for timelessness.

What are Whiskey Stones?

Whiskey stones, or whiskey rocks, are small cubes of clean, cut natural stone (typically soapstone) used to chill whiskey and other spirits. These stones, available in a variety of sizes, are designed to be stored in the freezer, and added to straight shots of whiskey, bourbon, or scotch, in order to chill them without the risk of diluting the drink. The best whiskey stones for keeping drinks ice cold however, are the ones that are made of stainless steel. These chilling stones of steel have gel inside them that freezes allowing them to stay colder longer than traditional stones. However many purists would swear regular soapstone whiskey stones are the best. To that we say, to each their own.

While it’s true that different drinkers have varying preferences, including some who prefer to have a little water added to their drink, whiskey stones such as these create the possibility to quickly lower the temperature, while preserving unadulterated straight-from-the-bottle taste. Since good whiskey is aged over many years, a nice bottle isn’t always cheap. Maintaining the distilleries desired balance for flavors is important, and too much water can lead to a watered down taste. Whiskey stones eliminate any and all danger of too much moisture, and still give you a tasty, chilled beverage.

Redefining “On the Rocks”

Whisky stones appeared in the first decade of the new century, around 2007. They were originally made exclusively from soapstone, a naturally occurring metamorphic rock. Soapstone is the perfect type of rock to make a whiskey stone, due to its soft composition. Once the stones have been cut and tumbled to remove sharp edges, a whiskey stone can be placed in a glass without the worry of scratches or breakage. Throughout history, soapstone has been used to create many types of kitchen ware, from mixing bowls, to fireplace surrounds, to sculpted works of art, so it’s a natural fit inside an Old Fashioned glass of whiskey. Some soapstone whiskey stones feature a semi-polished finish, retaining the muted look of natural rock. Others are highly polished, with a shiny, slick black surface. Both types of finishing work equally well, so it comes down to the individual drinkers preference in looks.

Whiskey stones also make enjoying a cold drink easier than before, especially when they come with unique whiskey glasses like this. Prefer a chilled whiskey but didn’t put the bottle in the fridge or freezer? Simply drop a few of the soapstones into your glass and you’ve got pure unadulterated and chilled whiskey without having to add ice and risk watering down your expensive bottle of Glenmorangie Signet or Michter’s.

Over the last decade or so that whiskey rocks have been around, new ideas have been introduced that offer high levels of style and usefulness. Each drinker now has the option of using a few small whiskey rocks, or one large whiskey stone to add to their glass. Large, round whisky stones are available, paying tribute to the sister 21st century trend, round ice cubes. Stainless steel whiskey stones are also being made, which offer the handsome look of brushed silver. Many scotch drinkers prefer the stainless steel cubes because of the brightness it brings to their tumbler and how it chills their drink.

Balls of steel whiskey stones are also being made now which roll around in special glasses to bring out the aroma and flavor of the scotch or whiskey while rapidly chilling the liquor inside the glass. Two examples of this are the round steel ball in the whiskey tumbler above, and the special liquor tasting glass below with comes with two steel ball whiskey stones.

Another huge advantage of whiskey stones is that they work in every glass imaginable. Unlike ice molds or other chilling methods, the small stones are perfect for every kind of glass from an old-fashioned to a Glencairn, you get to choose exactly how you want to experience your chilled drink.

While most whiskey stones are either cubical or spherical, you’ll see more unique shapes like this set! Technically called tetradecagons, these whiskey stones have 14 sides each! The unique shape is largely for aesthetics as these stones are made of Basalt, but the increased surface area will help keep your drinks cooler for longer than some cubical stones. These are often called “diamond whiskey stones” because they’re somewhat shaped like a classic diamond. They’re a little bigger and heavier than traditional whiskey rocks, so you won’t need as many in your drink either.

How to Use Whiskey Stones

Using this innovative drink accessory is very simple. Simply place in the freezer for 4 or more hours. When you are ready to drink, place your desired number of whiskey stones into your glass (or glasses, as the case may be). Reach for your favorite bottle of bourbon, scotch, or blended whiskey, and pour as usual. Wait a minute or two for the temperature of your drink to go down, and poof! You’re ready to sip. The best whiskey stones will last a lifetime, so it’s worth the investment.