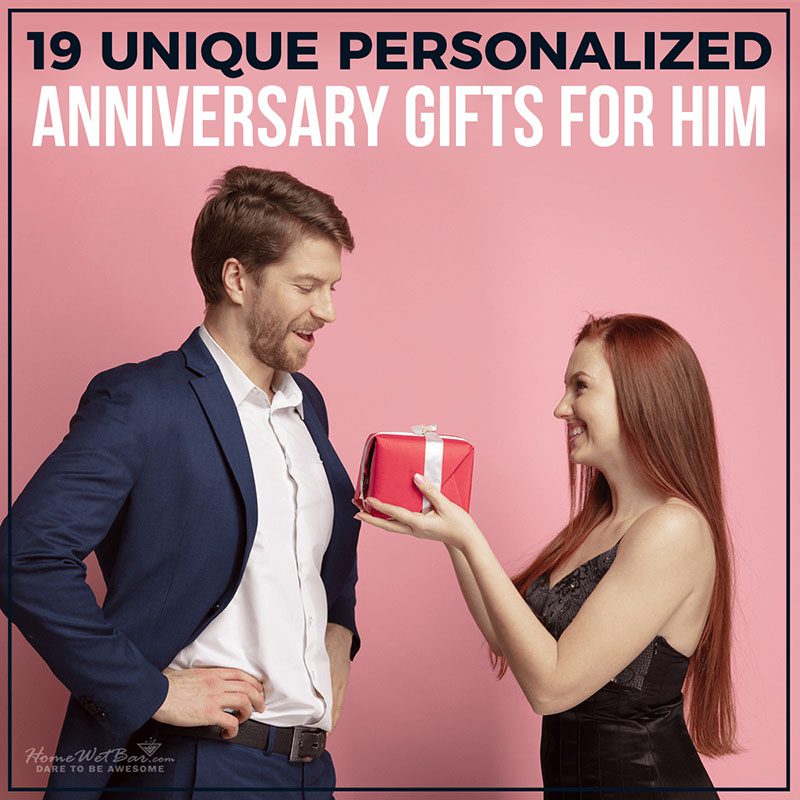 19 Unique Personalized Anniversary Gifts for Him

Personalized Anniversary Gifts for Him are the Best Way to Celebrate Your Special Day Together!

Your anniversary is quickly approaching and you’re totally stumped on what to give your significant other as a gift! You’ve been together a while so you know the kinds of things he likes and his interests, but you want to give him something special. Personalized anniversary gifts for him are ideal because they’re custom made items that show you care and that you pay attention to what he likes. It can be something as simple as a personalized version of something you would normally get him as a gift or something really unique and special for a milestone anniversary gift idea. As long as you keep his hobbies and interests in mind, you can’t go wrong with a personalized anniversary gift for him!

Sophisticated Personalized Anniversary Gifts for Him

For the man who enjoys a quality glass of whiskey, a custom made decanter set is one of the most impressive personalized anniversary gifts for him. This beautiful four piece decanter set is perfect for after-dinner drinks with you, but it’s also great to have around when he has a friend come over so that he can offer them a drink in style. You can even have the entire set personalized with your wedding or anniversary date so that every time he uses it, he’ll be reminded of you!

Every Movie Buff Wants His Own Theater

Is your boyfriend or husband really into movies? Like any movie fan, he’s dreamt of having a decked out home theater. One way to help make his dream come true is with this awesome custom theater sign! He’ll be so surprised by this amazing personalized anniversary gift for him and will be so happy to have such a unique work of art to help make his home theater come together. Pair this sign with a new TV or a box set of his favorite movie trilogy and you’ve got the ultimate anniversary gift!

Manly Personalized Anniversary Gifts for Him

Your husband or boyfriend is the kind of man who enjoys spending time outdoors but also indulges in fine whiskey and even a stogie from time to time. What is the perfect anniversary gift for someone who’s manly and sophisticated at the same time? This awesome personalized ammo can gift set! He’ll love having his own custom rocks glasses for a relaxing drink after spending all day at the shooting range with his new custom ammo can.

The Perfect Personalized Anniversary Gift for Him

For guys who like to grill and cook, the best gifts help make his favorite hobby even better! This personalized set of grilling tools is ideal for any type of anniversary, especially if you pair the set with some steak rubs or spices so that he can try out the tools right away. These handsome, professional-quality tools are sure to be great upgrades to his standard grilling tools. Plus, they can go with him to the neighborhood park, a friend’s house, or even to his parents’ for the family reunion so that he can grill up delicious burgers and hot dogs for everyone. Talk about an awesome set of personalized anniversary gifts for him!

The Coolest Anniversary Gift for a Beer Fan

Looking for something cool to give him for an anniversary? Look no further than this custom beer mug gift set! This three-piece set is one of the best personalized anniversary gifts for him, especially if you also give him a six-pack of his favorite beer. He will love having his own custom beer mug for his usual beer at dinner and to enjoy while watching a game on TV in his favorite chair.

477+ GIFT SETS AND GIFT BASKETS FOR HIM>

Have you and your husband been together for a few years? Then it’s probably time for new wedding bands! For your upcoming anniversary, get your husband a personalized wedding band. This handsome titanium ring is sleek and modern on the outside, but the inside is engraved with a sweet message from you. He will love how thoughtful and manly this personalized anniversary gift is!

For the Whiskey and Cigar Fan

There’s nothing like a fresh stogie and a cool glass of scotch to help him unwind after a long day. Make his favorite relaxing hobby even more enjoyable for your anniversary with this custom whiskey and cigar gift set! He’ll love being able to store his favorite stogies in the cigar case to keep them fresh, and the whiskey stones will eliminate the need for ice that always ruins his drink. This sophisticated anniversary gift is sure to be the best gift he’s ever received, just make sure to include a bottle of his favorite whiskey and a couple of stogies in the cigar case.

His Own Chip Set for Poker Night

Sometimes, the best anniversary gifts are items he’s always wanted but have never gotten around to getting them for himself. For the guy who’s been longing for a poker chip set so that he can have a game night with his friends, nothing is better than this handsome personalized poker set! No matter what anniversary he’s celebrating, he will be so excited to use this suave chip set on the next poker night with the guys.

Romantic Anniversary Gift for Both of You

Do you and your sweetheart like to enjoy a bottle of wine together on date nights and special occasions? This lovely wine glass set is the perfect personalized anniversary gift for him! He will love using these custom glasses for those romantic moments with you, especially after a delicious dinner together. No matter how long you’ve been together, he will be touched that you got him something so sweet that you can both enjoy.

Step up your gift-giving game with this ultimate personalized beer gift set that is perfect for your husband or boyfriend! He will be completely speechless once he opens up this amazing gift set on your anniversary and won’t even know which part of the set to focus on. He’ll love using the custom pint glasses for a cold one with you or a buddy instead of drinking straight from the bottle. The awesome bottle opener and pocket knife are the cherries on top of this incredible anniversary gift that he’ll use all the time!

You and your man agreed on nothing too fancy for this anniversary, but you still want to get him something nice. You can’t go wrong with a new leather wallet that’s monogrammed with his initials! You could pair this custom wallet with a package of his favorite candy or a gift card to his favorite store to make it a complete gift. He’s sure to use this high-quality wallet for years to come until it’s worn out, which means you can just get him another one!

There is nothing more badass than drinking whiskey that’s chilled with bullets. Your boyfriend or husband will love using this awesome monogrammed gift set as often as possible because it’s entirely engraved with his initials, looks awesome, and it makes him feel cool for using it. It certainly makes his usual glass of bourbon after dinner more enjoyable, and he’ll love being able to offer a friend a glass of Bulleit with bullet whiskey stones just so that he can say “Here’s your Bulleit with bullets.”

A Fun New Hobby to Enjoy Together

One of the best personalized anniversary gifts for him is an activity that you two can enjoy together, like collecting! This fun shadow box is great for collecting every bottle cap or wine cork from the drinks you enjoy together. You could start on your anniversary and track the progress of your collection to see if you can fill it up by the next anniversary! You can even give him a few bottles of his favorite beer or wine to help him get started on this new hobby.

He loves to go to his favorite pub and enjoy a hefty beer with his friends, so why not give him an anniversary gift that allows him to do the same thing in the comfort of his own home? These large custom beer mugs are just like the ones in his favorite pub, and hold a surprising amount of beer! He will love being able to kick back and relax with a proper beer along with you or a buddy with this set.

For the Man Who Dreams of His Own Whiskey Label

Any guy who drinks whiskey has fantasized about what his own whiskey label would look like and what the whiskey itself would taste like. While you probably can’t buy him a distillery, you can get him his own custom whiskey label sign for your anniversary! This awesome piece of decor will look awesome in his home bar or man cave, and you can customize almost the entire thing. He will be absolutely amazed by the creativity you put into it, which certainly makes it one of the most unique personalized anniversary gifts for him.

Cufflinks Are Always a Good Idea

Along with watches and ties, cufflinks are one of the best go-to gifts for men because they’re for special occasions and are usually pretty fancy. This set of monogrammed cufflinks is such a cool personalized anniversary gift for him because he’s certain to not have any cufflinks like them! He’ll want to wear them out to your fancy anniversary dinner and to every formal event from now on because they’re so unique and attractive.

Ultimate Set of Personalized Anniversary Gifts for Him

Want to give him something truly unique and special for your anniversary? This set is it! You can customize nearly every item in this set with up to three lines of text to make it as romantic, funny, or simple as you like. Whatever you choose to engrave on this unique set, he will be amazed by the amount of thought you put into this set. In fact, this entire gift looks like it’s been put together specially by you, which makes it even more thoughtful.

He’ll be rendered speechless when he gets this badass gift set for his anniversary! No matter what special occasion or milestone anniversary you’re celebrating, he’ll love every piece in this manly gift set. Everything in it is practical and useful for using indoors or outdoors, which makes it the ultimate gift set for men. Best of all, almost everything in it has his name on it, making it even cooler!

The Ideal Personalized Anniversary Gift for Him

Like most guys, your man has a couple of watches. He likely has them scattered all over his dresser or bedside table and has often expressed a need for a watch case. This custom watch case solves his problem and is also a great personalized anniversary gift for him! He will love having a place to keep all of his watches organized and secure so that he always knows where his best watch is for formal occasions as well as where his everyday timepiece is. You can customize the two lines of text on the glass with a sweet message or even something as simple as “John’s Watches” as an extra thoughtful piece to this problem-solving anniversary gift.

229+ PERSONALIZED ANNIVERSARY GIFTS FOR HIM>