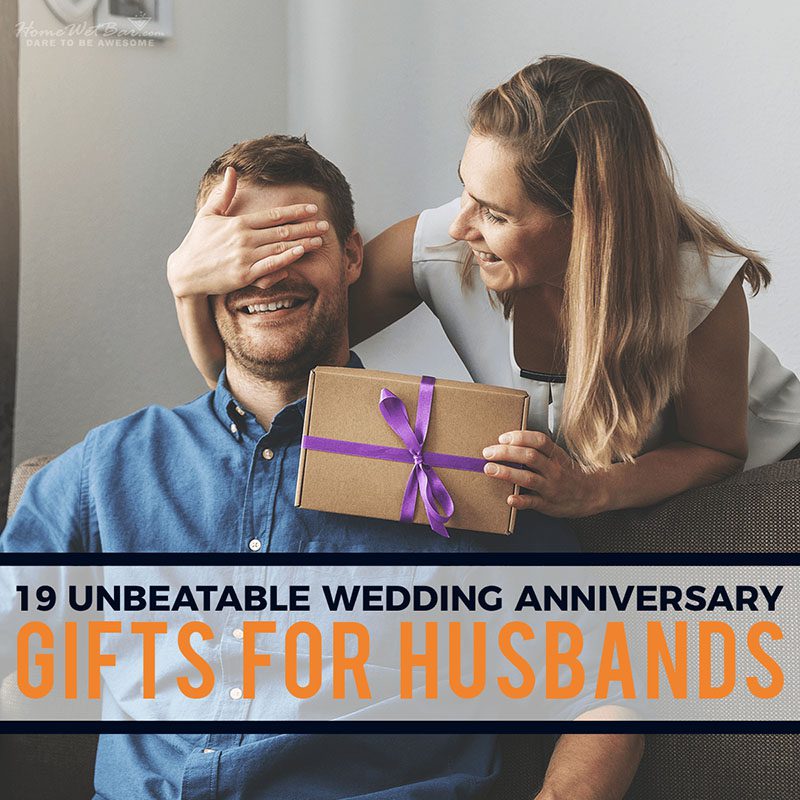 Unique Wedding Anniversary Gifts for Husbands He Will Enjoy

There are three things you know your husband loves: whiskey, cigars, and you, of course. For your upcoming wedding anniversary, give him something special to celebrate another wonderful year of marriage with this classy whiskey and cigar gift set! He will love that you got him his very own personalized whiskey glass and everything he needs to enjoy a stogie. You can even fill the cigar case with three of his favorite cigars so that when he opens your thoughtful gift, he can light up a cigar right away and try out each and every piece of this amazing set.

Your husband enjoys having a nice, cold beer now and then. Sometimes, he’ll hang out with his buddies at the local brewhouse and have craft beer from large, hefty mugs, which is his favorite way to have a cold one. Surprise him on your anniversary with his very own custom beer mugs just like the ones at the brewery! He will be so excited to bring home some of his favorite craft beer and pour it into one of the hefty mugs so that he can sit back and relax with a perfect mug of beer in the comfort of his own home. Plus, you or a friend can join him as it comes with two mugs!

The most romantic wedding anniversary gifts for husbands are those that you put a lot of thought into, like creating a custom sign for him! This unique tavern sign is perfect for his home bar, garage, office, or even the dining room. He will love that you took the time to make it a one-of-a-kind piece just for him.

Create His Own Whiskey Label

Your husband has definitely thought about what it would be like to have his own namesake whiskey label someday like Jack Daniels or Jim Beam. For your wedding anniversary, you can help make that dream come true! This incredible decanter set allows you to fully customize the label-inspired design to make it a one-of-a-kind gift that your husband will treasure forever. The two of you can enjoy a couple of celebratory anniversary drinks using this amazing set and keep it on display so that he can show it off to his friends and offer them drinks from it every time they visit.

Does your husband love to grill? He’s probably got some grilling tools already, but they’re likely due for an upgrade since he uses them fairly often. For your anniversary, get him this handsome personalized set of grilling tools! He will be in awe of the luxurious rosewood handles and engraved carrying case when he opens up your gift on your anniversary. Then, he’ll want to use them right away to grill up a tasty anniversary dinner for the two of you!

The Only Kitchen Gadget He’ll Need

Speaking of grilling, the only downside to it is that it has to be done outside. At least, until now! With the Ninja Foodi 4-in-1 Indoor Grill, he can grill even when it’s freezing outside! He can also air fry, roast, and bake with this incredible gadget. Your anniversary dinner will be grilled and crisped to perfection with this amazing indoor grill as your husband will waste no time in trying out his awesome new kitchen gadget.

The Ultimate Wedding Anniversary Gifts for Husbands Who Love Beer

Does your husband love beer almost as much as he loves you? Then he will be over the moon for this ultimate beer gift set! With four personalized glasses, a new bottle opener to add to his collection, a couple of beer nuts, and even a wooden gift box to keep everything in, he won’t know which part of the gift is his favorite. The craft beer snifters are perfect for sipping on his favorite local microbrews while the IPA glasses are perfect for enhancing his pale ales.

Something You Can Both Enjoy

Stumped on what to get your husband for your wedding anniversary? You can’t go wrong with a bar cart that looks like an antique globe! This amazing bar cart is something straight out of a Bond movie, and your husband will be so excited to find the perfect place in your home for it. You’ll both feel like royalty as you mix cocktails from your luxurious new bar cart, and he’ll love surprising guests with the hidden bar storage inside the globe!

A New Way to Enjoy Whiskey

You’ve been with your husband long enough to know how he likes his whiskey, but you can make it even better with a smoke box system! By infusing his neat scotch or bourbon on the rocks with a delicious new smoky flavor, it’ll be like he’s trying his favorite drink for the first time all over again. In fact, he’ll love his smoke-infused drink so much that he’ll want to try out other drinks and different wood chips to find out what other delicious concoctions he can make. Thanks to your amazing anniversary gift, he has a whole new way to enjoy whiskey.

A Place to Keep His Watches

Instead of getting him yet another watch for your anniversary, get him a place to keep his many timepieces! This large watch case is one of the most practical anniversary gift ideas for husbands because he’ll actually be able to find all of his watches easily instead of running through the house, late for work, frantically trying to find that one watch that matches the suit he’s wearing. Now, his watches will be organized, and he’ll have a place to keep his cufflinks and other accessories too!

Be the wife of the year and get your husband the hard-to-get console everyone is talking about: the PlayStation 5! He will be ecstatic that you got him the latest and greatest gaming console for your anniversary. If you’re a gamer yourself, it’s like a gift for you as well because now you can both enjoy gaming together on the new console!

This whiskey gift set is by far one of the coolest wedding anniversary gifts for husbands! He will love how cool the whiskey stones are, literally! They will keep his drinks chilled until the last drop without affecting the flavor as ice does. You two can enjoy a couple of cocktails with this fun set in celebration of your anniversary. He’ll love showing the realistic bullet whiskey stones to his friends when they come over by serving them a drink and surprising them with what they’ll think are actual bullets in their whiskey!

Treat your husband to a quality stogie whenever he wants by giving him a cigar humidor for your wedding anniversary! This awesome humidor is made out of an authentic ammunition box once used by the United States military, making it even cooler than a regular wooden humidor. Your husband will love taking his humidor to his friends’ houses and sharing his stogie collection with them. Make sure you fill it with a pack of his favorite brand of cigars before you give it to him on your anniversary!

The Perfect Anniversary Gift for the Husband Who Loves Movies

Is your husband a movie buff? Then he will love this awesome home theater sign! He’s always dreamed of his own home theater, and with this personalized sign, he will be one step closer to finally having one. He will be so excited to hang it up in the perfect spot in the living room, just before you two settle in to watch your favorite movie together on your anniversary.

Your husband loves golfing, but you’ve already given him new clubs, golf clothing, and even a new golf bag for the last few anniversaries. This year, he’ll love this unique golf gift set! From his own custom divot tool to a nice new pocket knife, he’ll want to try out each and every piece of this awesome set. In fact, the best time to give him this gift set is the morning of your anniversary so that you two can go golfing together and he can show off his new essentials to his golfing buddies. As far as anniversary gift ideas for husbands go, these are the best ones for golfers!

Whether he keeps his whiskers long and flowing or carefully trimmed close, it is important to have proper beard care to maintain them. For your anniversary this year, make sure he has everything he needs with this deluxe beard care kit! With everything from beard shampoo to an expert shaver, this kit has it all. Thanks to your amazing anniversary gifts, his beard will be healthier and softer from now on!

The Most Impressive Anniversary Gifts

There’s nothing like a fresh stogie and a glass of whiskey to help your husband relax after a long day. With this awesome decanter set, he can enjoy his drink and cigar at once using the 2-in-1 glasses! He will love relaxing with you on your anniversary as he tries out his new glasses and decanter. Plus, he can use the wooden gift box for storing keepsakes and mementos!

A New Way to Cook

Your husband’s got the grill, the tools, and all of the meat rubs and spices he could need. What doesn’t he have? A steak stone! This unique hot stone is a whole new way to cook his steaks, scallops, seafood, and more. When he doesn’t feel like messing with the grill or it’s just too cold out, this sizzling stone will cook his meal (and yours!) to perfection with ease. The dry heat of the stone actually helps maintain the moisture of meats so that every bite is juicy and delicious. Plus, this set comes with handy condiment cups to put his favorite sauces and seasonings in!

The Coolest Decanter Ever

As far as anniversary gift ideas for husbands go, this unique ship in a bottle decanter is by far one of the coolest. He will love the novelty design of the spigot decanter and the cool shot glasses that come with it. The two of you can enjoy a couple of shots together using this fun decanter set to celebrate another awesome year of marriage!