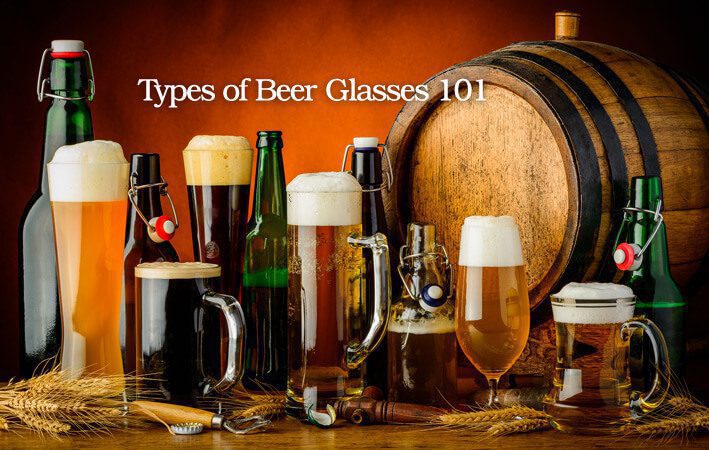 Your Guide to the Best Types of Beer Glasses

Beer is one of the oldest beverages developed by civilizations, so we can only imagine the types of drinking vessels that were first created for beer. Traditionally beer glasses, were made with a specific purpose. For example, the German beer stein was developed with a lid to keep flies out of it during the Black Plague. Another example is the pint glass, which was produced to prevent breakage when storing beer glassware by stacking them.

It also has been said that the reason there are so many types of beer glasses available in this time is due to typical marketing schemes by beer breweries. This could be a true statement, there are just about as many beer glasses as there are types of beer. But would the beer breweries go that far for a marketing scheme if there wasn’t a benefit to this? Of course not! Like wine, beer glasses each have many attributes in which improve the flavors in different types of beer. Beer contains volatiles which are compounds that evaporate from it to create a beer’s aroma. Choosing the right glass for the type of beer you’re drinking can enhance these volatiles when pouring your brew. With so many choices, choosing a glass for your beer can be overwhelming. That is why we put together a short guide to the various types of glasses along with beer recommendations below.

The American pint glass is just about the most common type of beer glass. These are the best beer glasses for use at local restaurants and most homes because they are easier to store by stacking them. They are constructed in a cone shape that tapers slightly toward the bottom of the glass and usually holds 16 ounces.

The British pint glass (also called a Nonic Glass) is similar to the American pint glass, but the difference is a slight bump along the top of the glass and it holds 20 ounces. The bump also adds the benefit of grip so your beer glassware won’t get stuck when stacking them. Another benefit this small bulge adds is head retention when pouring your beer which adds to the great aroma of your beer. Traditionally darker beers are served in these types of beer glasses.

Beer mugs are a popular type of glass which feature a sturdy handle and are usually heavier than other beer glassware. The handles on these types of beer glasses are said to have been developed so the drinker would have more confidence when “clinking” glasses. These can be made of a variety of materials including pewter, ceramic, glass, or stainless steel to name a few. Well-known beer glass styles of the beer mug include the German beer stein, tankards, and dimpled mugs. The stein is a German beer mug that is usually made of pewter and, many times has a pewter lid attached to it. Legend has it steins were developed in during the black plague to keep the fleas that carried the black plague out of your beer. Yuk! Thankfully we no longer have to deal with disease carrying fleas but they are still a great way to keep flies and other bugs out of your favorite brew.

Beer tankards, similar to the stein, have a flared round bottom, hold more than the usual serving size of beer, and some tankards even have a glass bottom. A funny story behind the glass bottom tankard is that most bar fights started when someone was blindsided while drinking from their tankard; the glass bottom provides a clear view so they could always see what was coming! Meanwhile, dimpled mugs are a charming beer mug style that was once a standard beer glass at pubs in Britain.

These types of beer glasses are many times mistaken with the real Pilsner glasses below in American. The term seems to be used interchangeably at times. In reality they are called Wheat Beer Glasses. They are used to serve wheat beers, traditionally called a Weizenbiers or Bravarian Weizens. This German style glass has thin elegant walls and is typically quite tall allowing the glass to showcase the beer’s color. It is said the tapered glass shape originates from the desire to trap yeast at the bottom of the glass, which was very common in traditional beers until mass bottling and forced carbonation became popular in the early part of the century, and is still common today in micro-brews and home brews. These Weizenbier glasses typically hold around .5L but it’s also common to see them holding 20oz -24oz. The larger sizes allow for more of that appealing fluffy foam or “head” which traps aromas and is visually pleasing; typically associated with this type of beer

Pilsner glasses are a more elegant type of beer glasses. These beer glasses are tall and have tapered walls that lead to a sturdy base. The pilsner glass was created to complement the lighter ales. The thin walls show off and maintain the sparkle in the golden hues of the ales they contain. The tall pilsner glass is also ideal for maintaining the perfect beer head which enhances the volatiles in beer, therefore creating a better enjoyment in the taste of pale ales. Sometimes this beer glass style can be mistaken for a Weizen glass, but the pilsner is tapered evenly from top to bottom and has no curves in its design at all.

Beer boots have been around for over a hundred years, but have regained popularity thanks to movies like Beer Fest in recent years. Born from a Bavarian tradition over 100 years ago where soldiers filled their boots with traditional ale to toast and salute their military victories. Shortly there after the glass version was made, and the rest as they say, is history! Range anywhere from 0.5L to 2.0L. TIP: Twist the boot when you near the end unless you want a beer bath!

So What Beer Glassware Should I Use?

Our suggestions under each type of glass above should be a good starting point for the average beer drinker. However the type of beer glassware you choose for your ale is ultimately up to you. Each is made for a different type of beer and all the different types of beer glasses all have their pros and con dependent on the type of beer you are drinking. No matter if your choice of ale is bitter, cream ale, or stout there is a beer glass that was specifically created to accent the aromas and taste of your beer just right! So experiment with different beer glasses and see which one works best for you!