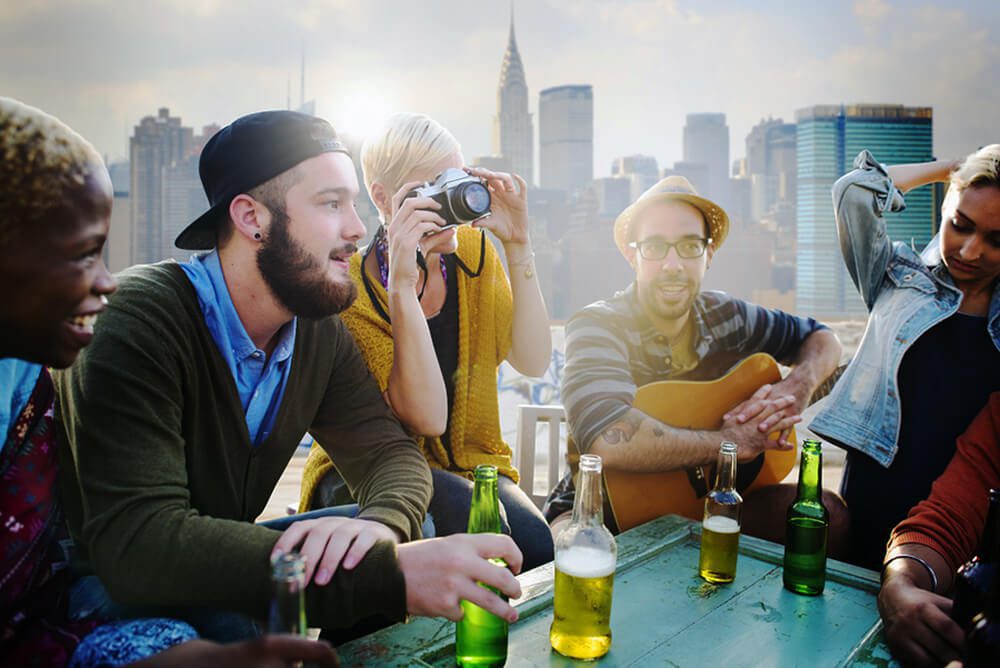 The Top Four Cities to Drink Beer in America

“Beer is proof that God loves us and wants us to be happy.”

Creator of civilizations. Destroyer of Sundays.

This “liquid gold” brings men together like a campfire… except it tastes delicious, doesn’t leave you smelling like smoke, and – if done correctly – helps fuel the fires of a good time.

Which you may or may not remember.

Simply put: beer is amazing. And the following four American cities hold their beer making – and drinking – to a higher standard.

Portland is the Olympus of American beer cities. It has more microbreweries than any other state and produces some the nation’s highest quality beers.

(Fun fact: Many Simpsons characters are named after streets in Portland.)

(Another fun fact: Matt Groening’s father is named Homer. So is Matt’s son.)

Now let’s return to our subject at hand:

Rogue: It’s not just a cool name: these beers definitely break new ground. You may remember them by such beers as Hazlenut Brown Ale, Dead Guy Ale and Chipotle spiced lagers. The brewery itself is located in Newport (located on the coast), but the Rogue pub in Portland is well worth a visit.

Mcmenamins Kennedy School: Ever wanted to get drunk in class? Well now you can. At this former grade school-turned-bar, you can enjoy house-brewed ales in the cafeteria, sip bourbon in detention hall and even sleep the night away in a former classroom. There’s even bowling, movies and a live band each weekend!

Lompoc: Sigh. Some breweries have all the luck. Others – like Lompoc – seem to get thrown under the bus. This brewery does pale ales the way pale ales were meant to be done: deliciously.

Especially when served in a 32 ounce mason jar. Hmmm… your moonshine distilling great-uncle’d be proud.

Deschutes Brewery: Like Rogue, Deschutes is an out of town brewery (Bend, Oregon) with a pub in Portland.

And thank God for that.

The brewery in Bend is OK… but certainly not worth the drive. Fortunately, you can enjoy their delicious collection of lagers and ales (most notably the pale ale and stout) without leaving town.

I know what you’re thinking: Chico? Where the hell is Chico?

This happens a lot.

But this small college town – once lauded as the “number one party school in America” by Playboy magazine – is home to one of America’s best, if not the best brewery.

Sure, you may have had their pale ale. It’s delicious… but… that’s just the tip of the iceberg. There’s much, much more to this brewery.

Their Celebration Ale gives more meaning to Christmas than Frosty, Santa and all his little reindeer combined.

Their Crystal Wheat beer? A crispy, clean beer which goes PERFECT with a hot dog at a ballgame.

And their Bigfoot barleywine – a beast of a beer approaching ten percent alcohol – will hurt you. In a good way.

With a motley crew of beers like these, it’s no surprise Sierra Nevada became the second largest craft brewery in America (behind Sam Adams).

Where to drink in Chico:

Visiting Chico without drinking at the Sierra Nevada Brewery is like going to Saudi Arabia without visiting Mecca.

Except you can drink.

At the brewery you can enjoy beers never intended for mass procudtion, including an astonishing array of Irish reds, IPAs and German style beers.

Local bars  – such as Madison Bear Garden and Banshee – serve some of these beers… for as little as one dollar per pint.

That’s right: one dollar. Per pint.

And by the way: the best cheeseburger in the world is also in Chico. Try the bacon cheeseburger at Nobby’s (located on Main Street) to see for yourself. Words cannot describe how delicious this burger is, so I won’t try.

But your life will remain forever incomplete without it.

This small Colorado town boasts not one but two distinguished breweries and the annual Colorado Brewers’ Festival, a wild beer making (and drinking) spectactle held downtown each June.

New Belgium Brewing Company: Famous for Fat Tire – a crisp amber ale which got its name after its brewer Jeff Lebesch rode across Europe on a bicycle – New Belgium continues to churn out a wide selection of beers. The Sunshine Wheat and Abbey Grand Cru are both popular local varieties.

Odell Brewing Company: In my opinion, Odell is the best brewery in Fort Collins. They’ve created an astonishing array of beer, including double black IPAs and Bourbon Barrel Stout.

And last but not least:

You’d expect us to stick to the Pacific Northwest, right?

Truth is, Austin is a beer drinking paradise.

Not only is it the Live Music Capital of the World – with over 200 live music venues featuring blues, rock, house, country and more – Austin is surrounded by several high quality breweries (and one distillery, as you’ll soon see).

Shiner: This is Texas’ most popular beer. Brewed in the small town of Shiner (pop: 1,033) this brewery features a slightly sweet Bock beer in the traditional Czech style.

Real Ale Brewing Company: If you’re dying for a pale ale and can’t afford a ticket to the Pacific, Real Ale Brewery serves up a fine ale.

Garrison Brothers Distillery: Nothing complements beer better than a well-deserved taste of brown liquor. Fortunately, Garrison Brothers – the first legal bourbon distillery in Texas – has got you covered. It’s a small operation to say the least, and that – along with a damn fine bourbon – contributes to its charm.

From there, you can (and should) venture down to West Sixth Street for a night of live music, cheap drinks and killer hot dogs sold by street vendors.