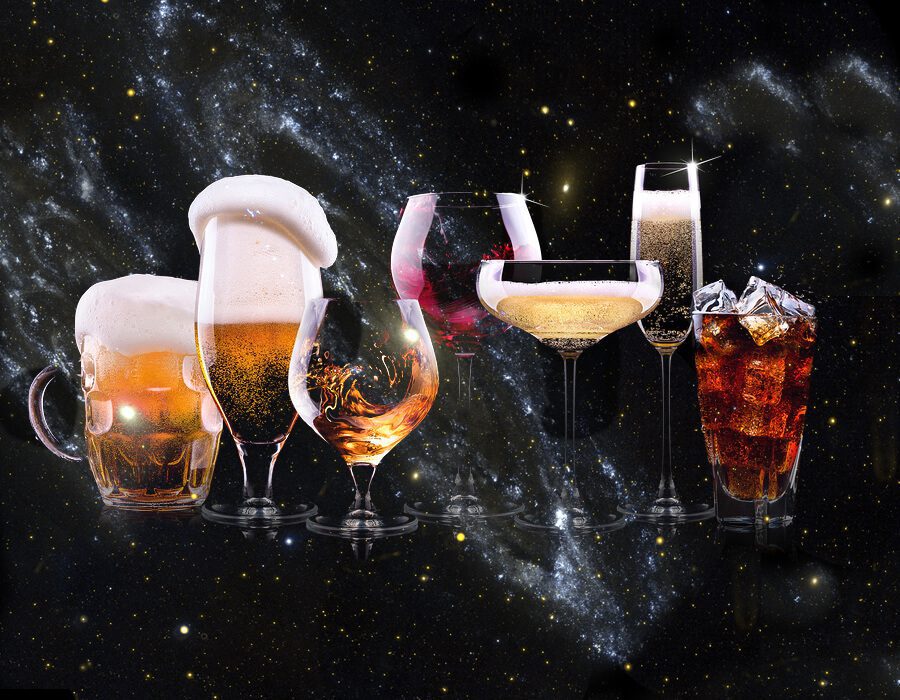 Looking for some good Star Wars party ideas in Alderaan places? Need some tips on how to be an all around better person and/or Jedi? You’ve come to the right place. I will now attempt to take you from Padawan to master Jedi, however it is ultimately up to you whether to harness the force at your next intergalactic blast. So shove the dark times aside, and grab your strongest membrosia, because we are about to huuguughghg raaaaaahhgh raaaaaahhgh aguhwwgggghhh which is Shyriiwook for party like rock stars. Be sure to have a designated Bantha Rider present if needed. 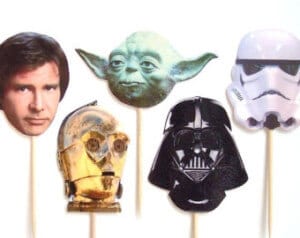 The proper decorations are essential for making the ambiance just right at a Star Wars party. If your house isn’t already outfitted in Star Wars inspired sheets, Darth Vader lamps, and storm trooper throw pillows and curtains immediately go out and purchase these items at your closest department store. If you’re on a budget some balloons and streamers might do. Pick up some white balloons and fashion them into storm trooper helmets with the help of a black sharpie. For some added fun create a starry backdrop out of construction paper or paper tablecloth and it is transformed into an easy photo booth backdrop. Wanting to take things one step further? Print out some props for your guests such as character faces and people will be having as much fun as Han Solo in a storm trooper fight.

GeekMom offers a wide assortment of printable Star Wars masks and awesome photo booth props. Don’t forget to share your pictures with us!

While a viewing of the Star Wars saga sounds like a must, it would be a rather lengthy endeavor. I totally condone having it play during the festivities, however opt for something a little

more interactive and host a trivia game. Put your own twist on things and make it a “Who Said It?” game or a “Finish the line”, say “I love you” whoever shouts “I know” gets a point.

If you’re a seasoned Star Wars expert, it will be easy to come up with questions on the fly. If you’re new to the galaxy, there are a ton of pre-made Star Wars trivia question lists out there, some even feature difficulty levels, depending on your guests overall knowledge of the saga. If you have a bigger group, grab some index cards and have them “submit” their answers. Be sure to have prizes on hand, this can be anything from a Star Wars action figure to a movie theater gift card only to be used for the new and highly anticipated Star Wars: Episode VII.

Wookie Cookies anyone? No? How about some Han Rolos? Good food and tasty drinks are essential for an aspiring Jedi (or Sith) no one is really judging here. There are a plethora of dishes out there in the cyber world for your photoreceptors to gaze upon.

Pretzel sticks with icing can transform those boring salty things into awesome colorful lightsabers. Or there is also my personal favorite “Jar Jar links in a blanket” Tip: Don’t use real Gungans, we all know they’re awful.

When it comes to drinks Yoda soda (sparkling water, lime juice, and lime sorbet) is always the way to go. Feel a little daring? Spike it with some vodka, only if you’re a 21 year or older jedi that is. Jedis don’t promote underage drinking and neither do Siths, in fact it’s something everyone in the far, far away galaxy can agree on. If you are in the 21 year old Jedi camp and want to reach for the booze right away try some cocktails, just don’t drink and use the force.

Jedi vs. Sith – Pick Your Force 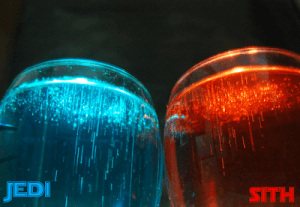 For both: Pour everything but the sprite into cocktail shaker with ice. Shake well and then strain into cocktail glass. Top with sprite and add ice if desired. Determine which side of the force you land on by which cocktail you choose. 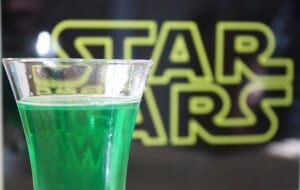 from The Daily Noff

Pour all ingredients into cocktail shaker with ice and shake well. Strain into shot glass. Simple, strong, and right to the point, just like our favorite Jedi master it is. 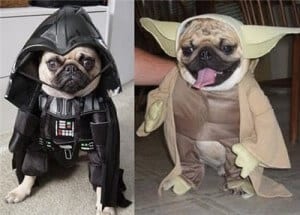 It doesn’t matter if you’re a sexy R2-D2 or you’re donning paper Yoda ears, you better be rocking something at my Star Wars party. Now you’re probably wondering what to do if you excitedly open your front door only to reveal someone dressed in passe “2015” clothing, don’t worry I’ll tell you. You freeze them in carbonite. If you don’t have any carbonite on hand (I know I’ve run out on plenty occasions) you can simply hand them the aforementioned paper Yoda ears that you spent hours carefully crafting in preparation for those who obviously don’t respect the Republic. Feeling a little more manly than being a sexy R2-D2? That’s cool. There are tons of other options for you, a sexy C-3PO or perhaps Hans Solo seductress are also good choices. If that still doesn’t fit your fancy try a Chewbacca bathrobe. However, if you choose this option you have the responsibility of speaking only in Shyriiwook, the tongue of the wookie, to make it more authentic.

Disclaimer: Don’t be Jar Jar Binks, however dressing like Jar Jar Links in a blanket is acceptable.

How To Make It

A wise man once said “Do. Or do not. There is no try (in partying).” Okay I may have tweaked it a bit but you get the drift. Ultimately there is no “bad time” when friends dress up in costumes and Star Wars is involved. From the biggest bashes to the smallest watch parties, I think we can all agree that Star Wars brings us together in the most awesome way. May the force be with your party, my friends.