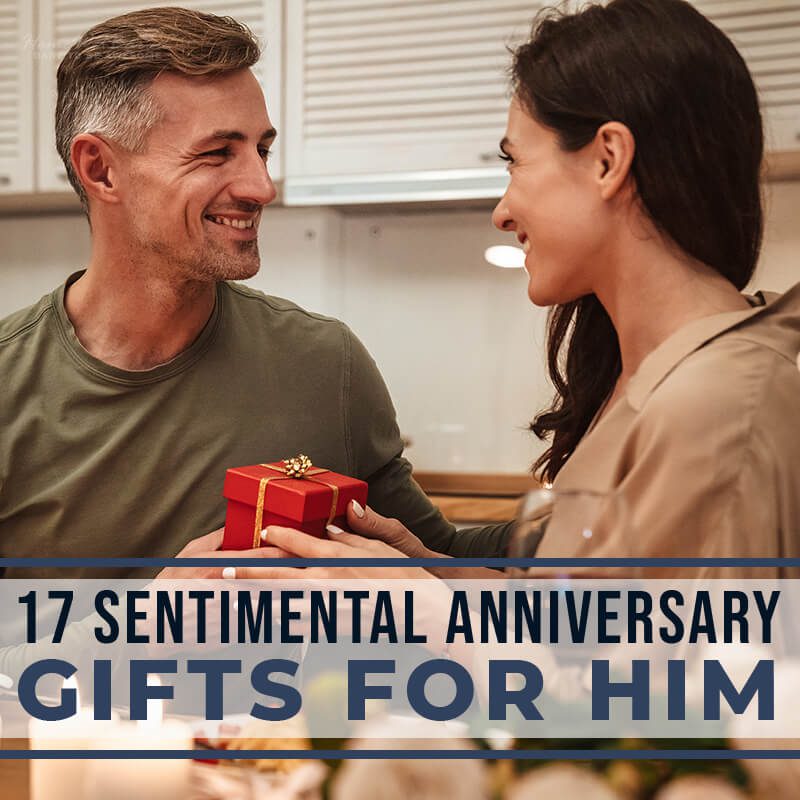 17 Sentimental Anniversary Gifts for Him

Make this Year Special with Sentimental Anniversary Gifts for Him

Anniversaries are a time for couples to embrace each other and reflect on their journey over the past year. They’ve celebrated the holidays together, had date nights, and overall grown closer as a couple. So, why not make it a memorable celebration? These sentimental anniversary gifts for him are a great way to give a meaningful gift that he’ll love for years to come! Wondering: “What do you get a guy on an anniversary?” “What should I gift to my husband on our anniversary? “How can I surprise my husband on our anniversary with a gift?” Simply follow along! These unique and personal gifts are a great way to get something he’ll never forget.

Smoked Out Sentimental Anniversary Gifts for Him

Sentimental anniversary gifts for him can come in a whole host of forms. They can be gifts, experiences, or flavors and aromas from a meal. With this gorgeous cloche smoker, you can capture all of that at once! It is a gift he can experience again and again as he creates his own custom flavors infused into his go-to whiskey. And you can be sure he will always remember the first smoked whiskey he made on his anniversary with the woman he loves!

Anniversary Ales for Him

A great thing about anniversary gifts is you get to think a little bit outside of the box, and when he sees this personalized ammo can gift set, he’ll know you really put some time into finding a unique gift. From the rugged ammo can to the matching pint glasses to the folding knife and real bullet bottle opener, he’ll want to use every single piece of this set the night he gets them! He’ll be so thrilled to toast to you and your relationship using his custom glasses, just make sure there is beer in the house!

Get badass ideas for anniversary gifts for him with this blackout stainless steel wine tumbler box set. Engraved with his name and the anniversary year, he’ll know this means something special, even at a first glance. What he won’t expect is that the glasses are made out of stainless steel, so whether he is into cocktails or wine, he can easily keep his drinks chilled the whole time he enjoys them due to the insulating nature of these badass tumblers!

Add some unique home decor that he will love with his own custom brewhouse sign. For the beer lover, there is nothing better than having a sign showing off not only his love for beer but when it was established! Whether he is into unique and hard-to-find IPA’s or more macro-brews, for an anniversary gift, every beer-loving man will be ecstatic to have such a unique gift!

Have a toast toward your sentimental anniversary gifts for him with this unique whiskey glass and whiskey stone box set. Engraved with a name and year, it is perfect for celebrating another year together as a couple. Plus, you get to take a drink together, is there anything else as worthy for you two to toast toward as the hopes of another great year together? That isn’t even to mention that he will love using this when he is at home unwinding or watching the big game and sipping chilled drinks thanks to the whiskey stones.

855+ CUSTOM WHISKEY GIFT SETS FOR HIM>

Every day you see him busting his butt at work. Make his day just a little bit easier with a leather portfolio. These will keep everything he needs organized and ready to go so he can look like the top-tier manager or CEO in progress that he has always wanted to be.

Perfect Wine Ideas for Anniversary Gifts for Him

The best ideas for an anniversary gift for him are ones that he can enjoy time and time again with the one he loves, just like this custom wine decanter gift set. This set is fantastic for a pre or post-dinner drink with his spouse, but he’ll love that the two of you get to use this gift for years to come. From big dinners to curling up on the couch and enjoying a drink of Merlot as you watch Netflix, he’ll love a gift that lasts as long as your love for one another!

Need a last-minute anniversary gift for him? Every man needs his own beer mug box set! After all, he never feels more manly than when he has a brewski in a mug. However, since this is an anniversary gift, you’re going the extra mile with this set that has his name and initial on both mugs and the box. Just add beer and you’ve given an anniversary gift he’ll be talking about for years to come.

Enjoying a drink needs to be more than simply twisting the top off of a bottle and sipping on your favorite liquor (not that that isn’t great!). However, when you add layers to the experience, liquor becomes so much more. This smoker set is the ultimate idea for an anniversary gift for him. He’ll be able to use a torch to infuse the flavor of wood chips and herbs into each cocktail or whiskey he makes. You’ve combined his love for you with this anniversary gift with his love of fire and whiskey, how could this gift not be an absolute win?

A Gift for the Memories

A gift that lets your husband hold onto his most precious memories? Say no more! A personalized shadow box is the classiest and easiest way to make sure he can always reminisce on the best time of his life. This one is based around a cigar theme, so each time he smokes a stogie, he can place the wrapper inside, and it’ll be a memento to that night. So when you get him this piece of decor, make sure you get him his favorite stogie too!

Custom Sentimental Anniversary Gifts for Him

It isn’t an anniversary unless the two of you share a good glass of wine together. However, this is a gift for him. So, for the wine-loving husband, what more could he want than this gorgeous personalized wine glass gift set that has your shared last name and initial on both box and glasses? This is the perfect way to end the anniversary date night with a drink at home or to share drinks throughout the year with friends and family from a fantastic matching gift set.

For the Husband Whose Got Accessories

Keeping all of your accessories organized can be such a pain. Everything gets scattered on the dresser, the cat knocks things off, or sometimes items just disappear. Make this custom valet tray a sentimental anniversary gift for him! After all, it is more than a case, it also has a custom engraving on the lid! That makes it so much more personal for him to use it to store his watches, tie clips, rings, and watches.

This is Way Cooler than a Standard Photo

A photo is worth a thousand words, but what about an acrylic photo? These are such a cool surprise anniversary gift for your husband. They’re a touching and timeless way for him to display his love for his wife. Thanks to the size and styling, it is easy for him to display on his desk, mantle, or even in his man cave.

Want sophisticated ideas for an anniversary gift for him? Why not get an engraved cognac gift set? There is simply something about a glass of cognac that makes everyone feel incredibly classy. Plus, this set comes with cigar accessories and an extra glass. That means he can puff a stogie while the two of you have celebratory drinks together for another great year as a couple!

Beard Care Ideas for Anniversary Gift for Him

You can’t have him looking like a mountain man who hasn’t seen civilization in years on your anniversary date. Have him look like a manly, dapper gentleman with this beard styling kit. From soaps to oils to balms to brushes, this kit has everything he needs to have a quality beard!

Don’t Play Games with His Gift

Decorate his favorite room of the house in style. You can be sure when he is laying the cards down for poker or sinking the 8-ball during a game of billiards, he’ll feel like he runs his own pool hall thanks to this personalized pool sign. Perfect for the most complete game rooms to even ones just beginning. With a gift like this, you know he is going to want to spend even more time getting better at darts, pool, and poker!

351+ SENTIMENTAL ANNIVERSARY GIFTS FOR HIM>