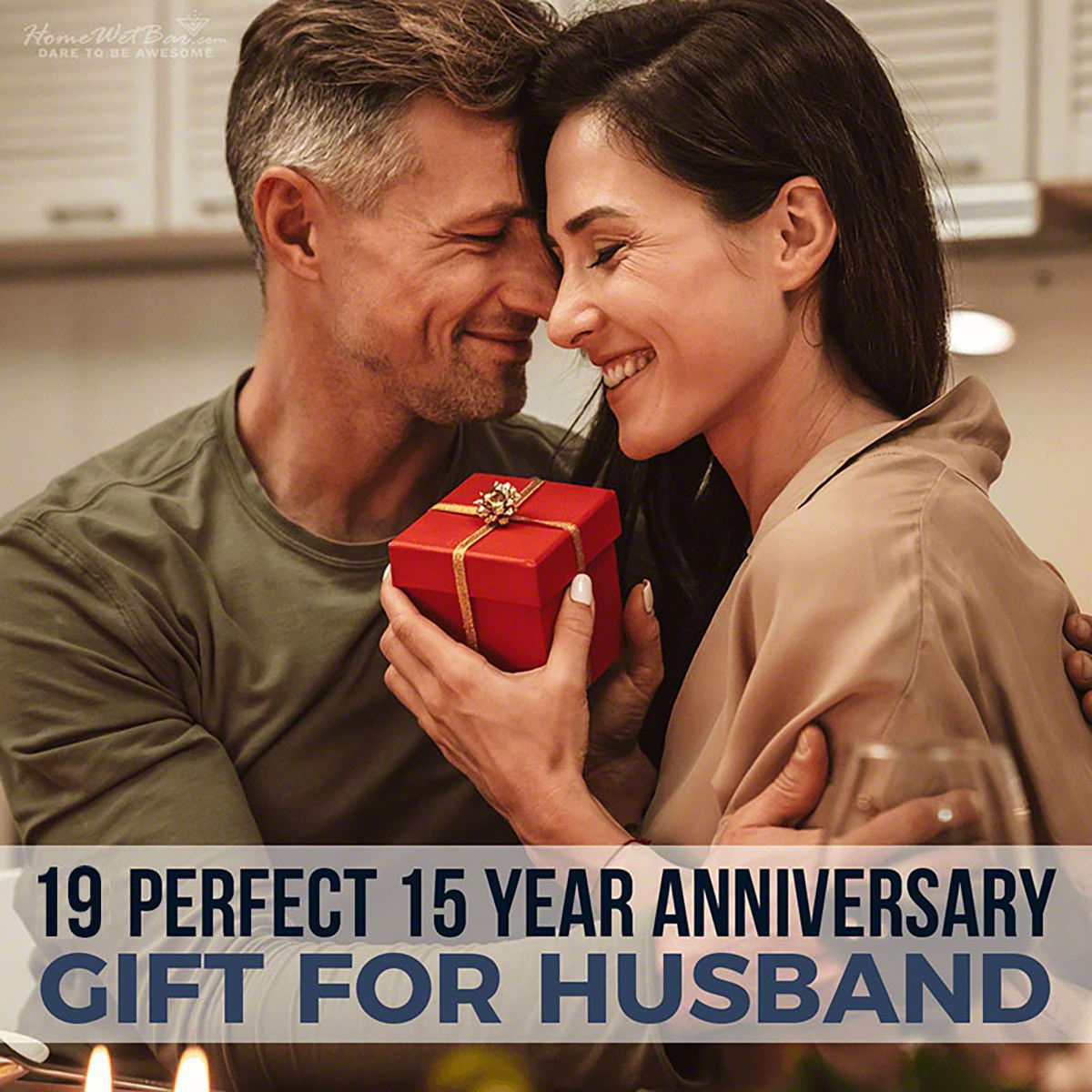 Check Out the Best 15 Year Anniversary Gifts for Husband Available:

An Elegant 15 Year Anniversary Gift for Your Husband

For your anniversary, get your husband this beautiful whiskey glassware set. He will love the elegant twisted design of these pieces and the way he can grip the glasses with ease. Nothing will make your husband happier or feel classier than celebrating your anniversary drinking from his new gift set with you! Talk about a great 15 year anniversary gift for husband!

Make sure when you’re finding 15 year anniversary gift ideas for him, that your husband has a little bit of everything to celebrate the night away! This luxurious-looking box set is a fantastic way to show him how much he means to you. With a whiskey glass, cigar holder, and travel cigar case, celebrating will be so much fun, he might feel like marrying you all over again! This is a great 15 year anniversary gift for him that he simply must-have!

Custom Whiskey Decanter for His Anniversary

Get him the luxury decanter of his dreams with this custom whiskey glassware set. This 15 year anniversary gift for husband is engraved with his last name and initial, this set will both look great and feel like a truly personal gift. He’ll want to use this decanter set as a toast on your anniversary and it’ll reside front and center on his home bar so he can use and talk about your awesome 15th anniversary gift as much as possible.

A Man with a Carefully Crafted Palette

Never have him looking to go to the brewery again to get that craft beer experience. Instead, this personalized beer-tasting set is just the anniversary gift he needs! When searching for the best 15 year anniversary gift for him, getting a gift that expands upon his hobby is one of the best things you can do. Now, he can indulge in his beers from home, and thanks to the spare glasses, he can share his craft beers with you or a friend!

Sometimes, all a man wants is to relax with a hefty mug of deliciously chilled beer. Your husband is no exception, so get him this amazing beer mug set as an anniversary gift. This custom gift will show him how much you care about him and that you want to help him relax in his favorite way. He’ll love seeing his engraved box set as well as being able to indulge in his favorite beer to when celebrating special anniversary.

Your husband is the classiest of all the classy men you’ve ever met. He loves to enjoy a nice glass of wine in the evenings, and you know that he would love to receive a couple of super classy wine accessories that match his sophisticated personality—a wine decanter set. He’ll love pouring his favorite red into the decanter, letting it aerate, and then pouring it into his new matching glasses and enjoying a drink.

A 15 Year Anniversary Gift for Husbands to Wow Them

Your husband is all about trying new things and experimenting. He’s also serious about his love for his favorite spirit, so you want to provide him a way to experience his favorite drink in a whole new awesome and creative way. This deluxe smoker system is the perfect anniversary gift that he can use to infuse different tastes into his liquor, making it taste absolutely phenomenal. He’ll love that you’ve given him such a unique, useful gift, and he’ll raise a glass of his smoky spirit to you for being the best wife and gift-giver ever.

A Gift That Won’t Have You Jumping the Gun

Any whiskey drinker, whether they indulge on occasion or all the time, appreciates top-notch whiskey hardware that will make the experience as great as possible. This bullet whiskey stones set is a fantastic 15 year anniversary gift for him because it’s unique, cool, and even has initials monogrammed on it, how classy is that? Your husband will greatly enjoy pouring himself a glass of whiskey, adding these bullet whiskey stones, and enjoying a perfectly chilled sip of his favorite whiskey.

Equipped for All Scenarios

For you, the best 15 year anniversary gift for your husband is something very unique that you know he’ll adore and admire. This ammo can gift set is as awesome and unique as you can find! The whole thing is awesome for taking in the great outdoors because it’s full of super useful items; with this gift set you know he’ll be equipped with plenty of tools for survival, even if survival means a nice glass of cold beer.

Right now, he’s a whiskey amateur, but he wants to become an aficionado. For your anniversary, help him achieve this dream with this whiskey gift set! These Glencairn glasses are shaped specifically to enhance the flavors of all the whiskeys your husband will try, this way he can learn to differentiate between the subtle nuances. He’ll love that his amazing wife cares deeply about him and his desire to become a whiskey aficionado.

This men’s gift set has just what he needs to be able to have a drink both at home and when he’s on-the-go. The lowball glass is the best way to drink whiskey when he’s at home chilling on the couch with you. For those on-the-go situations, this flask is a must-have. This 15 year anniversary gift for husband is a great set and he will appreciate you helping him have a way to have a drink whenever he likes!

The Toughest Crystal Anniversary Gifts for Him

Get the toughest 15 year anniversary gift for him around when you get your husband this badass ammo can and whiskey gift set. He’ll never think in a million years that you can find him something so cool for his anniversary. He can easily enjoy a drink with you using this gift on your anniversary night or even use the ammo can to take his guns and a few hundred rounds to the range. This is the perfect gift to get for your husband because it has so many uses. If you have a husband who you see as a total badass, this engraved ammo can gift set is definitely a hard-to-beat gift!

Not every 15 year anniversary gift for him has to be something traditional. While crystal is traditional, there is nothing wrong with getting your husband a modern gift that he will want to actually use. For the beer-lover, you know he won’t be able to resist his own tavern sign! Whether he has a full home bar or simply a chair he likes to drink out of, you can be sure this sign will be hung up before the wrapping even hits the floor!

For the Simple & Sophisticated Husband

Still thinking to yourself “What do I get my husband for our 15th wedding anniversary?” Look no further than a gift set that he can use to celebrate your special day and every day after will be this gorgeous cigar and whiskey glass gift set. It comes with whiskey stones, cigar accessories, and of course, this unique glass. All you’ll need to do to make this year extra special is to throw in a few stogies and even a bottle of whiskey so he can put his new gift to work right away!

After at least 15 years together, you know that your husband absolutely knows his drinks at this point. He’s been crafting and drinking cocktails for years. Use this personalized cocktail smoker kit to introduce something new to his palette. Talk about an awesome 15 year anniversary gift for husband! With the unique smoking from this set, he’ll be able to create all new flavor profiles for now and old favorites! Not only is this a cool-looking gift and fun to use, but it creates delicious drinks too!

A shadow box is a fantastic gift idea for any husband. It is a place for him to store mementos, in this case, cigar bands, from some of his most meaningful occasions. For example, when you give this custom shadow box, the cigar wrapper from the stogie he had on your anniversary night will start his collection. Now, with this gift, he can see his favorite mementos on a daily basis. How cool is that?

This Set Will Blow Him Away

For the past 15 years, your husband has wowed you with amazing gifts on every gift-giving occasion. On your 15th anniversary, you want to return the favor by giving your husband this phenomenal gift set. This whiskey decanter set will blow him away because of how beautiful it is! Your man will love storing his favorite whiskey in the decanter as well as using the special glasses to taste every nuance in whiskey.

Ammo Can of Great 15 Year Anniversary Gifts for Husbands

This ammo can tool box will make him feel like the burliest guy around. He’ll really like the tools in this one-of-a-kind set that he can use when he’s camping, fishing, hiking, or doing any other outdoor activity that manly men like to do. He can even use the ammo can to store his equipment for his outdoor activities. He’ll greatly appreciate you buying him a gift that brings out his masculinity.

For the True Whiskey Lover

Incorporate tradition with a bit more awesomeness than he is expecting with this whiskey decanter and sign gift set. The crystal glassware nails the 15th anniversary on the head, but the unique design and sign make your husband feel like he has his own whiskey distillery, how cool is that? If you’re struggling with what to get your husband for your 15th anniversary, look no further than this incredibly cool and unique custom gift set!