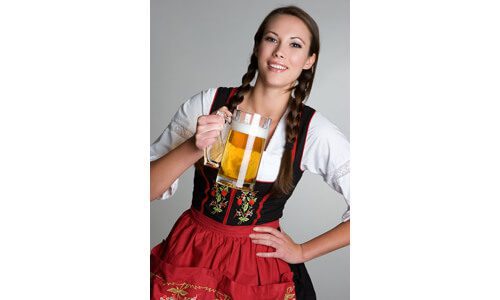 Oktoberfest is one of the most famous events in Germany and has become a very important part of Bavarian culture. Other cities worldwide often model their own Oktoberfest celebration after the original. Food, beer, music, games and dancing are never in short supply!

Where did Oktoberfest Originate?

The very first Oktoberfest was in October 1810 in Munich Germany. The exact date is believed to be between October 12 and October 18. The celebration was for the marriage of Crown Prince Ludwig and Princess Therese of Saxe-Hildburghausen. The marriage ceremony was October 12, 1810 and the famous horse race was on October 17, 1810.

Over the years, festivities included much more than a horse race, great beer and food. Amusement and rides were introduced to the celebration as early as 1818 when swings and a carousel were set up for revelers. Eventually many other activities including mush eating contests, barrel rolling races, goose chases and wheel barrow and sack races.

Hundreds of years later, we still enjoy the festivities of Oktoberfest. Many people today like to share the fun and educational experience of Oktoberfest with their entire family. The idea of “quiet Oktoberfest” was introduced in 2005. Traditional music quietly fills tents designated for families.

Quiet Oktoberfest has led to fewer violent crimes during the festival. More recently, tobacco has not been allowed in the tents due to smoking bans in public areas. Oktoberfest is a wonderful, historically educational experience for all age groups.

No traditional Oktoberfest celebration would be complete without hearty foods that perfectly complement a variety of beer. Hendl (chicken), schweinsbraten (roast pork) and haxn (knuckle of pork) are three staple foods of Oktoberfest. Wurstl (sausages), kaasspotzn (cheese noodles) and sauerkraut are foods worth keeping in mind for guests who enjoy variety. Of course no Oktoberfest celebration would be complete without brezn, or pretzels.

Beer Ideas for Your Oktoberfest Celebration

Marzenbier, or March beer: A style of lager. In 1539, the Bavarian brewing ordinance issued a decree limiting the months in which one could brew beer. The hot, dry summer months brought with them increased danger of fire during the brewing process. Due to this decree and other weather-related problems, lagers were brewed primarily during the month of March, hence the term March beer.

Hacker-Pschorr Original Oktoberfest Marzen: Another fine, German lager. The flavor has often been described as nutmeg with floral and yeast tones. The rich malty taste is a little heavier than other German beer, but tends to please many pallets. The Hacker-Pschorr brewery offers a variety of lagers and ales to please nearly any beer lover’s tastes.

No matter which types of beer you choose for your Oktoberfest celebration, make sure to have plenty of it on hand. The only thing that will cause your celebration to come to an abrupt halt is lack of beer. It is, after all, the time to celebrate good things in your life. Celebrate like you mean it with our collection of beer boots and other beer supplies.