Must-Have Outdoor Games for Your Next Barbecue

The smell of a bbq attracts friends and neighbors from several blocks away. Spring and summer provide the perfect weather for grilling and outdoor games. We’ve comprised a list of great outdoor games for your next backyard bbq. No matter what games you choose to include, the most important part is to have fun. Make up a few rules as you go!

Most great outdoor games are highly mobile so you don’t have to settle for one or two games. All of the games we mention here may be played by people of nearly any age. Turn any bbq game into a drinking game by implementing a “loser drinks” policy.

Pétanque: The object of the game is get your metal balls as close to the small wooden ball, known as the cochonnet or jack. The game can be played on dirt, grass, sand, or anywhere you like. If you like bocce, you’ll love pétanque

Magnetic Dart Board: If the idea of giving your beer drinking friends sharp objects to throw scares you, consider buying a magnetic dart board. Magnetic darts may cause a bruise here or there, but people are much less likely to put an eye out.

Croquet: Croquet is a very fun backyard bbq game. Several people may play at the same time as opponents or even in teams. Croquet is fun for people of all ages.

Badminton: Badminton is similar to tennis. Opponents use a racquet to propel a small plastic, cone-shaped projectile called a shuttlecock, or more commonly a birdie, back and forth over a net. When the birdie touches the ground, the round is over.

Volleyball: Volleyball is probably one of the most popular backyard bbq games. It’s very simple to set up, just set up a net, grab a ball and start playing. Opponents use their hands to propel the ball across the net. If the ball hits the ground on your side of the net, the other team scores a point.

Horseshoes: One of the only games where “almost” actually counts! In horseshoes, two stakes are driven into the ground, traditionally 40 feet apart. If your yard isn’t 40 feet, improvise. Each opponent takes turns throwing two horseshoes toward a stake on the opposite side. 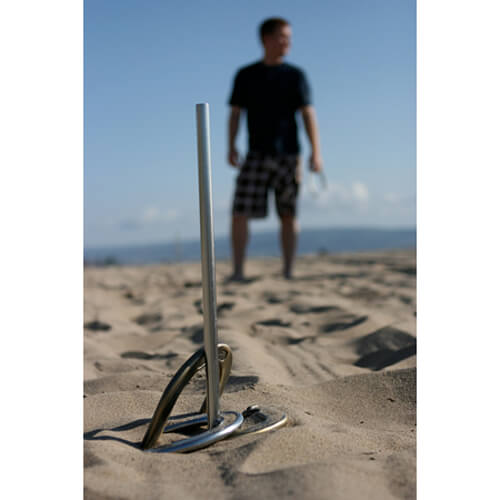 A horseshoe nearly encircling the stake is called a ringer and worth three points to the team. When a horseshoe leans against the stake, some call it a “leaner” and award two points. Horseshoes that land within six inches from the stake also earns points.

Drink holsters are an excellent idea for any backyard bbq. People get thirsty while they’re playing games, but they can’t play as effectively with a drink in their hand. Provide your guests a beer holster so they can keep their cool drinks at their side while they play.

“Mine” beer bands are like bracelets for your bottle. They’re available in a variety of colors so everyone can keep their drink separated from others. Writing your name on a can or bottle isn’t always possible, but keeping up with your color beer band is much easier.

Cold beer tubs look so much nicer than coolers. They still keep cool drinks cool but there is no lid to open or remind people to close. Just keep the ice coming and keep the beer tub stocked.