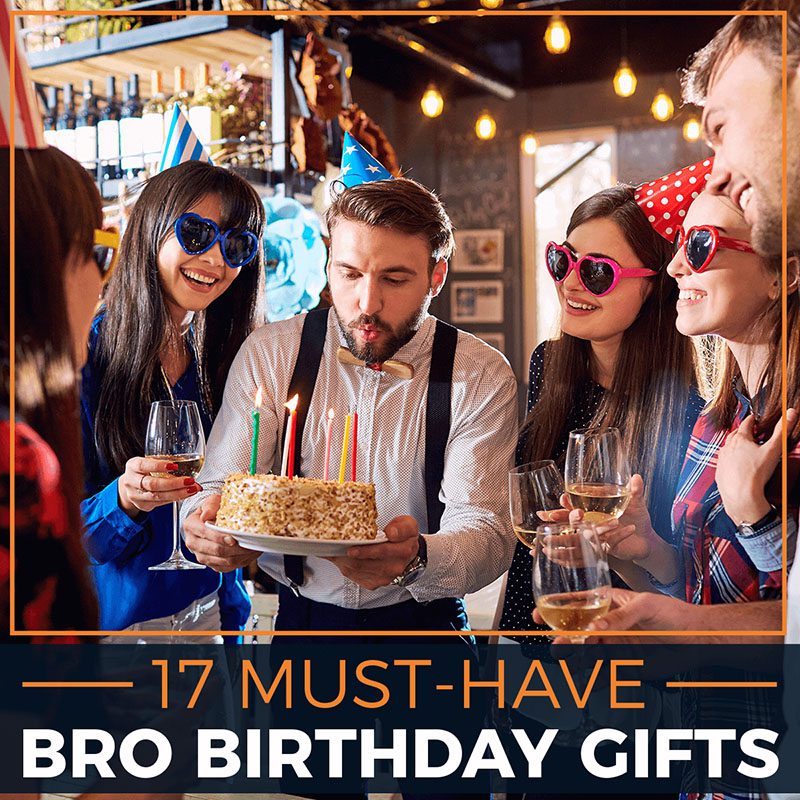 Your best bro’s birthday is coming up and you’re in search of a cool gift for him! He’s been your friend for a long time so you know what he likes, but you’re not quite sure what he would want as a birthday gift. The best bro birthday gifts are cool, manly, and practical items that are related to his interests and hobbies. If you two have a lot of similar interests, think about what you would like as a gift while shopping for him. Bro gifts don’t have to be extravagant or wildly expensive, but they should be totally badass! Whether he’s into gaming, grilling, craft beer, or all of the above, we’ve found plenty of awesome birthday gift ideas for him.

Badass Bullets for His Whiskey

There’s nothing manlier than guns, and your bro loves his firearms. He also enjoys drinking whiskey, especially after going shooting. This unique gift set combines his two favorite things into one badass bro gift that he’ll never forget! He will love using this set for a scotch on the rocks after an afternoon at the range, especially since he can use the awesome bullet whiskey stones to chill his drink. He might even use them to play a prank on his wife and make her think he’s drinking whiskey with actual bullets in the glass!

You and your bro have a usual microbrewery that the two of you hang out at every week, trying the newest concoctions and discussing the unique flavors. His birthday is coming up, which is the perfect time to get him his own set of craft beer glasses! This three piece set has an amber glass growler and two pint glasses so that he can fill up the growler at the brewery and bring home the beer to enjoy with a buddy. He will love that the set is personalized, too! Now, he can enjoy his favorite craft brews in the comfort of his own home whenever he wants!

Is your bro a guy who is known for his quick wit and vast knowledge of random facts? There’s never a lull in conversation when he’s around. He’s also known to smoke cigars, which makes this hilarious sign one of the most unique and perfect bro birthday gifts for him! He’ll love the funny design, and will be very excited to hang it up in his man cave or cigar lounge. You’ll definitely be hearing him say “I smoke cigars and I know things” from now on!

All of His Favorite Things in One Bro Gift

Your best bud’s birthday is coming up and you’re stumped on what to get him as a gift. He just has so many interests and hobbies! When in doubt, go with a gift set containing his favorite things. This unique gift set is for the dude who loves any type of liquor and a fresh stogie as it comes with a rocks glass, bottle opener, flask, and a lighter! He’ll have everything he needs for an awesome birthday celebration, just make sure you get him a bottle of his favorite liquor and a pack of his favorite cigars to complete the set.

The best bro birthday gifts have to cool, manly, and related to his interests. This kick ass tactical ammo box set checks off all three, and it’s even personalized! This set is perfect for the dude who enjoys beer, the outdoors, and a fresh stogie. He’ll love the awesome survival knife, which will accompany him on every outdoor adventure from now on! When he comes home from hunting or hiking, the first thing he’ll reach for is one of his custom pint glasses and his cigar accessories so that he can relax with a beer and a stogie. He can even keep the entire set in the ammo box for safekeeping, or he can use the ammo box to store anything from hunting gear to tools! Everything about this badass gift for men makes it the coolest possible birthday gift for your bro.

His Own Custom Jersey

Every man who loves sports wants a jersey with his name on it. If your best bro doesn’t have one already, his birthday is the perfect time to get him one! All you need to do is pick his favorite team, a number of some significance such as his birthday or his favorite player’s number, and his name. He will love having his very own jersey to wear on every game day, especially when he gets to go to games in person! No matter what, he’ll be rocking his custom jersey for years to come.

Your best friend is by far the coolest dude you know. He never ceases to amaze you and everyone around him with his insane stories and daredevil nature. You want to get him a gift that’s just as cool as he is for his birthday, and this is it! The set proclaims him as the most badass, legendary man to walk the earth. When he takes a sip from his custom glass, he’ll look even cooler than the Dos Equis guy. James Bond has nothing on him when he pulls out his cigar flask, showing off just how sophisticated and awesome he can be. Seriously, this incredible whiskey gift set is one of the best birthday gifts for men you can possibly give!

Show off His Favorite Brewskies

You and your bros love kicking back with a couple of beers now and then, but your best bro is the beer guy of the group. He enjoys trying new brews and collecting bottle caps as well as pub coasters from every new place he visits. One of the best bro birthday gifts for him is this custom sign that he can use to feature his bottle cap collection! He’ll love showing off the bottle caps from all of the unique breweries and bars he visited where he tried unique local brews. This cool sign will be his new favorite piece of decor for sure!

Your bro is the kind of guy who appreciates fine whiskey and strong cigars, but he’s also an outdoorsy guy who loves to go hunting and camping. This cool and classy gift set is the best of both worlds, making it the perfect bro birthday gift! He will love using the ammo box for storing his ammo or hunting gear, especially since he can take it along on his weekend trips. When he comes home after a successful outing, he’ll want to celebrate with a glass of scotch in a stogie with his custom glasses and cigar accessories.

Is your buddy really into grilling? During the spring and summer, you’re often invited over for cookouts and BBQs in his backyard. The last time he made you a delicious grilled steak, you noticed that his tools were looking a little worn. For his birthday, get him a whole new set of grilling tools! This attractive set is far superior to his regular old tools, and they even come in a personalized wooden case to keep them safe from the elements and to bring on the go. He will love being able to take his grilling must-haves when he goes to family reunions and camping trips so that he has his proper tools for grilling!

Get Him the Latest Video Game

One of the most highly-anticipated video games of 2019, Jedi: Fallen Order is a Star Wars game unlike any other! Your bro has been wanting this game ever since it was announced, which makes his birthday the perfect time to give it to him as a gift. This unique story game has all of the best elements of Battlefront and Force Awakens rolled into one all-new, amazing Star Wars game that he’ll be playing for hours on end. Once you give him this game for his birthday, you probably won’t hear from him until he’s beaten it.

Is your best bro the kind of man who enjoys relaxing with a cigar in one hand and a glass of scotch in the other? You can make his two favorite vices even more enjoyable with this awesome gift set! The whiskey glass actually holds his cigar for him, allowing him to have a free hand to scroll through the news feed on his phone or hold the TV remote. He’ll also have a secure place to keep his cigars with the stainless steel cigar case. Throw in a couple of his favorite stogies and a bottle of his preferred whiskey and you’ve got the perfect set of bro birthday gifts!

Create Rules for His Home Bar

Does your bro have an awesome home bar that you and the other guys enjoy hanging out at? He’s got the best set up, but he can be a little strict with his rules. The best bro birthday gift for him is this custom bar rules sign! You can customize each rule on this unique sign to reflect his own rules, or you can come up with your own. This fun, one-of-a-kind sign is one of the coolest gifts he’ll ever get, and he’ll hang it up proudly in his home bar forever!

The Ultimate Set of Beer Gifts

You know how you usually get your best bud a six pack or a case of his favorite beer every year for his birthday? Well, you can do better! Surprise him with this ultimate set of beer gifts and he’ll want to get you an equally amazing birthday gift! He will love having custom pint glasses and the cool bottle opener for his usual brewski at dinner. The tasty beer peanuts are so delicious that he’ll want more, and he’ll certainly appreciate the cool pocket knife. Everything about this incredible gift set will render him speechless when he opens up the box on his birthday!

Make Your Bro a Legend

The best gift for your best bro is making him feel like the coolest dude to walk the earth. All you have to do is get him this ammo can gift set for his birthday! The entire set is custom engraved with his name followed by “The Man. The Myth. The Legend.” How badass is that? Wherever he takes his cool new cigar flask or ammo box, everyone will know exactly how awesome he is. He’ll enjoy having the rocks glasses around so that he can have a glass of whiskey with his girl or a friend, especially because the glasses make him look cooler than ever. Seriously, you cannot go wrong with this incredible bro gift for his birthday!

The Most Useful Multi Tool

What’s a better birthday gift for a dude than a multi tool? This awesome Leatherman comes jam-packed with all kinds of useful attachments like a carabiner clip to take on the go, a screwdriver, pliers, a bottle opener, and so much more. This multi tool is sure to come in handy for work or at home! Wherever your buddy goes, he’ll be prepared for anything with this handy tool in his pocket.

His Own Chip Set for Poker Night with the Guys

You and the guys have been having a weekly poker night for a while, taking turns hosting at each other’s houses and rotating locations. One of your bros doesn’t have his own chip set, but he enjoys hosting poker night so you just bring your set over. Why not give him a poker chip set for his birthday? He’ll love this classy set, especially since it comes in a custom carrying case. Now he can bring his set to poker night anywhere, and finally host with his very own set. Who knows? He might even start to win more games!

279+ MUST HAVE BRO BIRTHDAY GIFTS>