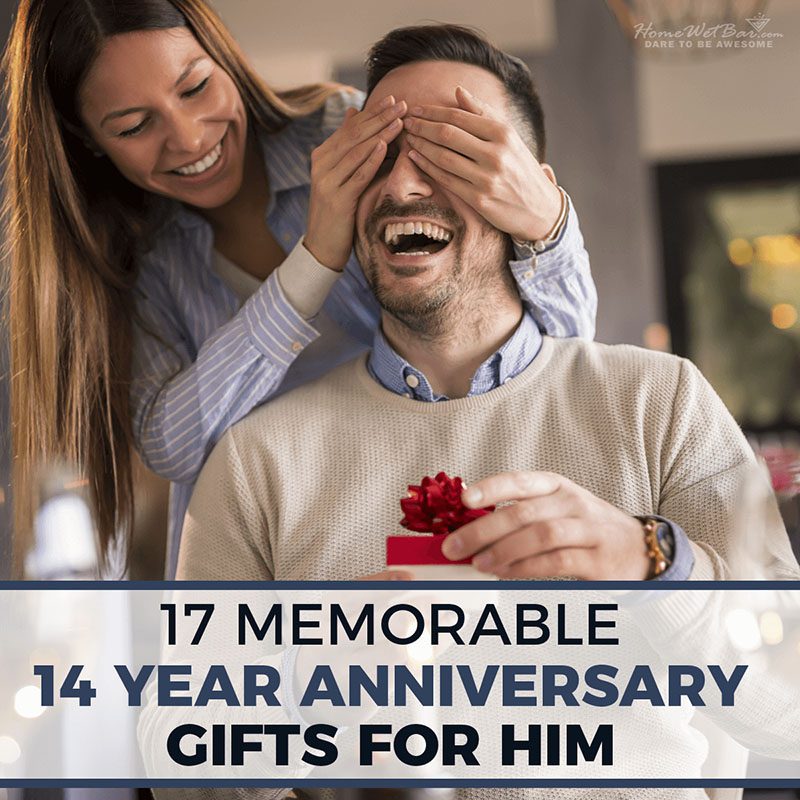 17 Memorable 14 Year Anniversary Gifts for Him

Find a Unique 14 Year Anniversary Gift for Him With Our Awesome Suggestions:

For the 14 year anniversary, the traditional gift is supposed to be ivory or gold; however, those can be a little old-fashioned and cruel (we’re looking at you ivory). Instead, find of the best 14 year anniversary gift for him on the market! He’ll be thrilled with his 14 year anniversary gift that is practical, invested into his hobbies, and is personalized. You’ve known him for at least 14 years at this point, so you know exactly what he likes. Just take something he loves, and give him a present that will make it even better. Don’t stress about trying to find some new crazy gift that might become his hobby. Make his gift as related to him as possible. This is your opportunity to find a cool gift related to one of his passions that you can be sure he will love! P.S., If you like these suggestion enough, you can even hold onto a few for next year when you’re shopping for 15 year anniversary gifts for him too!

Scotch, it has been his favorite drink for years. So, take this opportunity to give him a scotch decanter set as the ultimate anniversary gift for him! You’ve given him a few expensive or rare bottles over the years, but this is a 14 year anniversary gift for him that you know he’ll keep forever! He’ll be able to think of how great the time you two have spent together each time he sits back to have a drink from this set. Even better, he can share a drink with you and some friends, how cool is that? This set will quickly become a gift he won’t help but want to show off!

Your husband has always been a manly guy. Anniversary gifts for the everyday man just aren’t his style. He needs to celebrate in a more masculine way. Give him the gift he’s been wanting all these years with one that matches his masculinity! While you sip on wine, he can crack open beers and drink from the glasses that came in his ammo can gift set! You know he’ll use the ammo can for storing his awesome collectibles or even his beer accessories, and he will probably insist on using his new cool knife to cut everything around the house, even the mail! Get your guy an anniversary gift he will enjoy every day with this ammo can set!

For years you’ve seen your husband play poker with the boys. They’re always in the basement smoking cigars, pouring glasses of whiskey, and dealing hands of cards. Make poker night even cooler with his own game set! He’ll be able to gamble on any kind of game with this complete set. However, you still want him to stand out at the table, and he will with his own personalized glass. This cigar whiskey glass is not only a fantastic 14 year anniversary gift, but it is sure to make him look the table shark everyone else should be afraid of!

Is he tired of always having to go to the brewery just to get a pint of his favorite beer? Change his life with the ultimate 14 year anniversary gift for the craft beer lover! This gift will have him making trips to the brewery to fill up his new growler, but then he can sit at home and drink pint after pint of his favorite beer without the fear of ever running out! He will even want to display the gorgeous wooden display box the set comes in because of how great it looks! Inside, he’ll either store his beer accessories, or he can fill it with all the various beer caps he has collected over the years.

Just Tossing This Gift Idea Out There

His favorite thing in the world has always been to be outside and hang out with friends and family; make that easy with a cornhole set! This game set is a fantastic reason to get everyone up on their feet and playing a game together. Perfect for tail-gating, BBQs, or just nice weather in-general, he’ll find any excuse to get people out and throwing the bag around thanks to your epic 14 year anniversary gift for him. After 14 years, you know nothing will make him happier than becoming the ultimate bags champion!

Although some guys may not admit it, the right clothes make them feel awesome. A lot of the times, it is just a matter of getting them to shop for them. Make that process painless with an online order of clothes he is guaranteed to love. Select the style he’ll like the most, enter his measurements, and BAM! A few days later he’ll have a selection of clothes he’ll love that he can try on in the comfort of his own home. He’ll look better than ever, and one of the best parts is he can send back anything he doesn’t like. Make him look great for your 14 year anniversary with these easy and convenient clothes!

A Smoking 14 Year Anniversary Gift for Him

Does he have a taste for the exotic or the abnormal? Give him a whole new perspective on his favorite whiskey with a smoke box! For the whiskey-aficionado, this is the perfect 14 year anniversary gift for him. He can infuse his old favorites with flavors like cedar or thyme, and see how the smoke alters the taste. You know as a whiskey lover, this smoke box kit will have him trying every new flavor combination he can possibly come up with.

He Knows a Thing or Two About Cigars

Smoking cigars is what he does. He loves a good stogie, and it has been his hobby for years. What could be a better 14 year anniversary gift than a cigar set that shows you care about his passion! With his name engraved on each piece, he’ll know you see him as a great man who enjoys to smoke, much like Churchill or Mark Twain. Not only that, but now he’ll have some sweet cigar swag that he’ll be able to use on the daily. When he isn’t smoking, the shadow box and custom sign will be fantastic reminders of his hobby and your great gift!

A gift with diamonds may have been one of the first things he ever got you; repay the favor on your 14th anniversary with a decanter set that is completely diamond shaped! He’ll feel like the classiest man alive when he gets to drink from his very own decanter set. The stunning shape of the decanter set is sure have him showing it off any chance he gets. Not only that, but he will want to share his liquor that his new gorgeous decanter is displaying. He and three other people will be able to indulge in some fantastic drinks all thanks to your great anniversary gift!

Celebrate your special day in style with this awesome14 year anniversary gift for him that lets him indulge in all of his vices! This ammo can will have him grinning from ear to ear when he opens the lid to find that he’s got everything he could ever need to smoke stogies and sip whiskey! Pair this with a bottle of his favorite liquor and you’ve got a gift he won’t ever forget.

In today’s world, everyone is almost always plugged in. Whether they are at home doing chores, at the gym, or even at the office, it is likely they are listening to something. Your husband deserves a set of headphones that have sound that comes in loud and clear. Keep him from being tied down with a set of Bluetooth ones at that! Now, no matter what he is doing, his podcasts, audiobooks, or tunes are going to sound crystal clear with his new set of wireless headphones.

The 14 year anniversary gift for him needs to focus on the things he loves, and you know he is a massive whiskey fan. He may already have a few glasses or maybe even a decanter, but there is no way that he has his own bull decanter and matching drink set. He’ll always have this set out on display, no matter if he plans on having a drink or not; that is because he can’t wait for guests to see his awesome looking whiskey set. Any chance he gets he’ll want to share a drink from his new favorite whiskey set!

A Complete Cocktail Gift for Him

Your man likes to feel classy and sophisticated, make this year’s anniversary gift enhance his feelings with a fantastic cocktail gift set! His Gin and Tonics and Manhattans will never taste better than when he is drinking them out of his new glasses and staring at his new personalized sign. An anniversary gift set like this will have him feeling like Gatsby or Al Capone with this 1920s Art Deco inspired gift set! How could any anniversary gift make a cocktail guy feel cooler than this?

A Show-Stopping Stogie And Whiskey Gift

As a cigar and whiskey lover, your husband has long ago discovered that pairing the two vices create a delicious flavor. For his 14 year anniversary gift, you should make combining those hobbies even easier with a cigar whiskey glass and a cigar case! He is sure to use these gifts as soon as he gets them! He’ll even be able to smoke and drink with one hand because of the unique cigar whiskey glass. You’ll have made it so he never has to choose between holding his cigar or whiskey, because with one hand, he can now do both!

The Biggest Best Beer Gift Ever

As a beer-aficionado, he is likely to travel to breweries all the time. However, he can never get enough of his favorite microbrews. Instead of endless trips to the brewery, let him enjoy his small batch brews at home thanks a growler gift set! This personalized beer gift is perfect for him. He can fill the growler up with the best golden-brown liquid in the world, and enjoy it at home with you from his new pit glasses. For your anniversary, you know he would like nothing more than to celebrate with a beer, and with this set, he can do just that!

A Meaty Gift for Him

Let’s be honest, almost all guys absolutely love meat. They don’t care if they are having it served or if they are the ones grilling it. As long as they get to eat some of that delicious meat, they’ll be happy. So, make your husband happy with a box full of meat as the coolest 14 year anniversary gift for him ever! With pounds of steak, pork, chicken, and more, there is no way your husband won’t smile and be excited to fire up the burners when he opens this gift.

Crystal Clearly This is A Great Anniversary Gift

For 14 years you’ve seen him relish in every taste of whiskey he’s ever had; however, you know he could be enjoying his drink even more. Make his whiskey experience something special with this 14 year anniversary gift! The crystal Glencairn glasses are perfect for nosing whiskeys while the decanter is sure to bring out some added flavors too. An anniversary gift like this will not only have him thanking you, but his taste buds will be extremely grateful too!

139+ MEMORABLE ANNIVERSARY GIFTS FOR HIM>