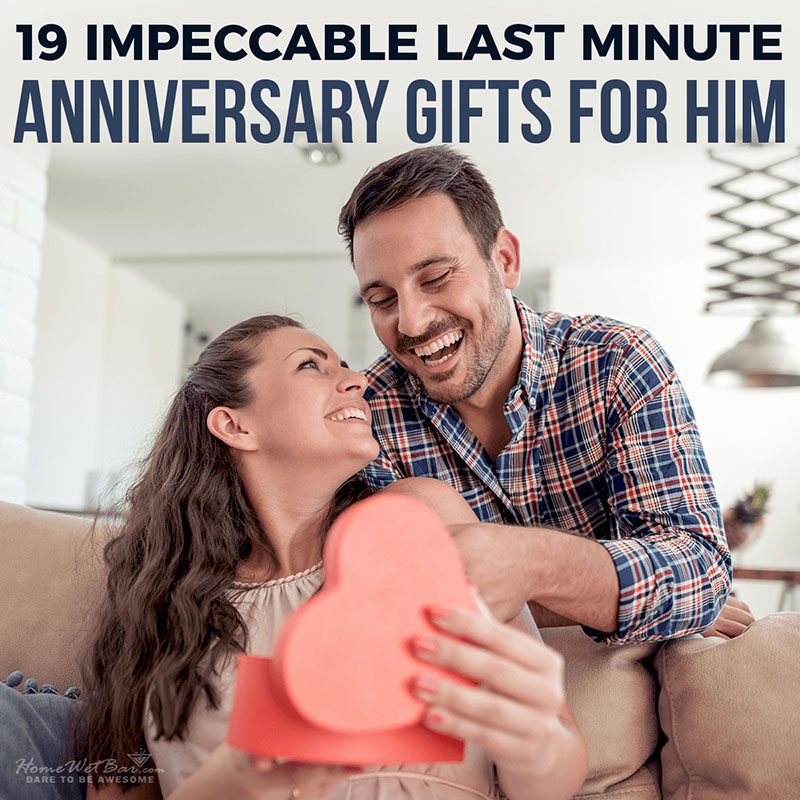 Don’t Worry, These Are the Last Minute Anniversary Gifts for Him You Have Been Looking For!

No matter how long you’ve been with the love of your life, each anniversary is special, and you want to give your sweetheart the perfect gift! However, the anniversary is coming up so fast and you’re still giftless, completely lost as to what to buy! These last minute anniversary gifts for him are so personal and unique that he’ll have no idea that you waited until the last minute to get them an anniversary gift! Even though you had to wait until it was almost too late to get an awesome gift, you can be sure that with these spectacular gifts, this will be one of the best anniversaries for him ever!

When you’re out of time and ideas, you can’t go wrong with gorgeous glassware sets for a set of last minute anniversary gifts for him! This decanter and rocks glasses set is the perfect gift for this occasion because not only does it look awesome, but the personalization will have him thinking you bought it ages ago! He’ll love celebrating the anniversary by sharing a drink with you using his new favorite glasses.

Sign for a Last Minute Anniversary Gifts for Him

A man needs his own space that’s just for him. For your anniversary, get him a last minute gift that will make his own personal space in his house awesome: this wooden man cave sign! He’ll love seeing his name on this handsome sign hanging in his favorite room of the house, and he’ll be really appreciative that his personal space is respected. This sign will make a jaw-dropping one year anniversary gift for him.

An Anniversary Gift Worthy of Being on Display

When all else fails, a useful gift is the way to go. This watch display case is an excellent gift because you know he’ll use it every day! It’s a great gift idea because he’ll use it to keep his watches, cufflinks, tie clips, buttons, rings, and any other accessories safe and in one spot. He’ll love how classy this valet box looks on his dresser or bedside table.

For a legendary man, only the most unique, awesome last minute anniversary gifts will do. This awesome ammo can gift set is the gift you spent all that time looking for! He’ll be incredibly impressed knowing that the ammo can was once used by the U.S. military and now has his name on it! The pint glasses and other items in this set will make the gift even cooler, and he’ll definitely consider it the most legendary anniversary gift sets he’s ever gotten!

For Your Classy Man

Your man is the classiest of the classy, so you know you want your anniversary gift to him to be just as refined as he is. This cigar and whiskey gift set is the perfect gift idea because it will make him feel even more sophisticated than he already is! He’ll love seeing his name on this high-quality glassware, and he’ll really appreciate the ease with which he can enjoy whiskey and cigars at the same time. He can even use the box to store mementos from your relationship!

Super unique gifts make great last minute anniversary gifts for him, especially when it’s as unique as this moon lamp! He’ll be in absolute awe of this incredible lamp that lights up his room, man cave, or office. He’ll be so impressed with the detail of this gift, and there’s no doubt he’ll feel incredibly loved on your anniversary knowing that you went to the trouble to find such a fantastic gift for him.

A gift set is always better than a single gift, so as a last minute anniversary gift, get your man the coolest set ever! This beer box set is an insanely awesome gift that he’ll definitely be obsessed with. Drinking beer from a mug with his name on it will make the beer-drinking experience better than ever. Add a sixer of his favorite brew to the set and you’ve got the most amazing gift!

Need a last minute gift that isn’t a gamble? Whether he’s a poker once a week kind of guy or just the occasional card player, he’ll love this game night set as an anniversary gift! He’ll have a blast using this gift when he has his buddies over for a game night or simply wants to have a relaxing evening of cards with you. The personalized glasses make for the perfect opportunity to enjoy a drink while he plays!

Spruce Up an Old Classic

One of the quickest and easiest last minute anniversary gifts for him is a bottle of his favorite liquor, but that by itself isn’t a good gift for an occasion as meaningful as this. That’s why you absolutely must give it in one of these wooden engraved bottle boxes! He’ll be so obsessed with the creativity of these handsome boxes that he can use to save a bottle of liquor for a special occasion or even to store small mementos from your time together inside it.

He deserves to be spoiled once in a while, so give him the most amazing last minute gift: this silk robe! When he’s lounging in this silky-smooth robe, he’ll be more comfortable than he ever has been in his life, which he’ll really appreciate! He’ll love that you found such an incredible gift he can relax in.

Want to get him a very unique gift that’s personalized and a ton of fun? That’s why you should pick this cornhole set. It’s one of the coolest last minute anniversary gifts out there that will make life fun! Since he loves having family members over for backyard barbecues and other fun get-togethers, he’ll be crazy about this awesome gift that lets everyone compete in a fun, exciting game like cornhole!

Join Him In His Favorites

Men love when you enjoy their favorite activities with them, so when thinking of last minute anniversary gifts for him, consider one of his favorite things—beer! That’s why this beer glasses and shadow box set is such an amazing gift idea! He’ll love enjoying a cold pint with you and saving the beer caps in the attractive shadow box. This way, he’ll have a visual reminder of each and every great time the two of you have together.

The Fanciest Last Minute Anniversary Gifts for Him

Only the fanciest of men have monogrammed cigar and whiskey accessories. That’s why this set of them is an awesome anniversary gift for him! He’ll feel like a million bucks holding one of these unique double snifter glasses and using his initialed lighter to light a cigar. Placing them back inside the handsome, customized wooden box will make him feel more special than he ever has!

For the Manliest of Men

When you’re with a manly man, you can’t go wrong with getting him a masculine gift set such as this one. He’ll be a huge fan of both the flask and travel mug because they allow him to enjoy his favorite beverages as he’s working out in the yard or on a camping trip with the boys.He’ll absolutely love using this gift on his next adventure!

When it’s really last minute, high-tech gifts are great anniversary gift ideas. This 4k Apple TV is an awesome idea that any guy will love! He’ll love the ease with which he can watch all his favorite shows and movies with this gift, and he’ll also be really grateful for the excuse to relax in front of the TV.

You want your last minute anniversary gifts for him to be unique, but not so unique that you aren’t sure if he’ll like it. That’s why this triangle glassware set is absolutely perfect! You know he’d love a decanter and glasses to enjoy his favorite spirits, but their super rare shape makes them a unique gift he’ll really like, and he’ll feel very loved knowing that you found a rare gift that none of his buddies already have!

There’s nothing like a personalized bar sign that will make a man feel proud of his home bar! This wooden sign will look awesome in his home bar, whether it’s a full-fledged home pub or just a corner of the kitchen, and the cool personalization will make him think you’ve been planning this gift for months!

Men deserve to be pampered, especially on their anniversary. That’s why this spa gift box is an excellent last minute anniversary gift idea! He’ll love using the soap and other grooming items when having a relaxing evening to feel like the best version of himself. He’ll definitely want to use it before the two of you go out for your anniversary!

When thinking about last minute anniversary gifts, you want to choose a gift that he can use to celebrate your anniversary with you! This whiskey and cigar gift set is the perfect way for him to celebrate another year of love between him and his favorite person. He’ll love using these unique glasses and cigar accessories to celebrate every other special occasion with you for the rest of your lives.

251+ LAST MINUTE ANNIVERSARY GIFTS FOR HIM>