Beer Glassware for All of Your Lager Needs

When it comes to beer, you have a lot of different options as anyone who has walked down a liquor store aisle can tell you. Most often you will see them broken up into Lagers, Ales, and Stouts; but even that isn’t the full story. Lager beer alone has pale, amber, dark, and bock varieties each with its own unique flavor profile. So with so many different options to choose from, especially with the craft beer renaissance we are experiencing in the United States; can one glass be just right for all of these beers?

The short answer is no. With all these varieties of beer just begging to be enjoyed, there are dozens of unique beer glass types that are designed specifically for each brew style. Right now, I’ll focus on beer glassware for Lagers since you are most likely here for an article and not a dissertation. In order to understand the reasoning behind the beer glasses I will be listing below, let’s talk about the difference between the two most popular beers:

Ale and Lager are the most common beer types that you will run into on the shelves today. The main differences to the average beer consumer can be found in the finished product. Taste, look, and smell are all indicators of the kind of beer you find in your glass. Typically, ales have more fruity undertones and a generally sharper flavor profile sometimes described as bitter (not always in a bad way). Lager beers, on the other hand, are characterized by a smooth crispness that has led to their growth in popularity over the past 600 years.

These indicators are great for beer tastings and figuring out exactly what types of beer you like. That being said, how does a beer become a lager or an ale? The answer to this question is relatively simple… yeast. Ales are prepared with a type of yeast, Saccharomyces Cerevisiae, that has been used for quite some time. Think the same yeast used when making wine or bread. Some Babylonian beer recipes can be traced all the way back to 4300 BC! In fact, historians think we may have been making beer even longer than bread.

While ale has a long history, lager is a relatively new beer that is made using Saccharomyces Pastorianus, a yeast that was only found to be useable in the 15th century. Lager yeast is different because it thrives in colder environments that would leave ale yeast dormant. This allows for cooler temperatures in the brewing process which result in the pilsners, bocks, and other lagers we’ve come to love. 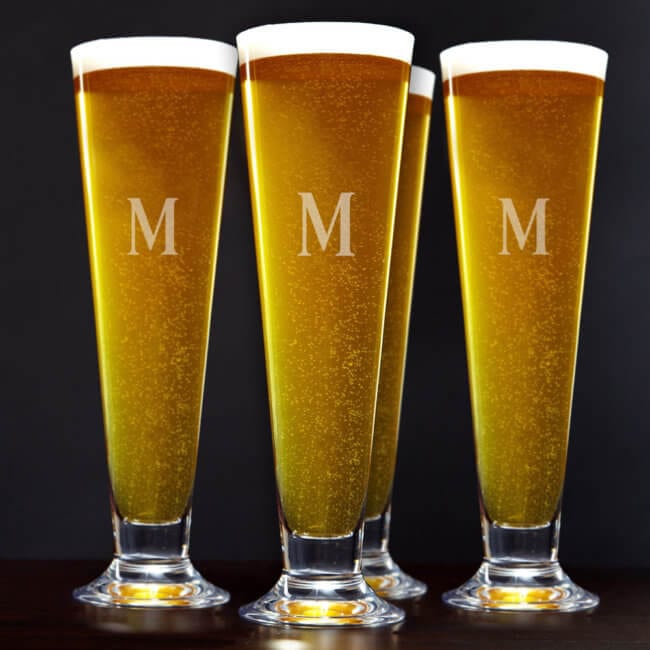 When drinking an American lager or the ever popular Pilsner the perfect beer glass is… you guessed it… a pilsner glass. This tall footed glass is tall with no curvature making it great for preserving the beer’s head as well as retaining carbonation. The pilsner glass pairs best with a Lagunitas Pilsner, Hopworks, Budweiser, or Pabst Blue Ribbon.

Bocks are a lesser known beer that has grown in popularity of late. It’s typically got a higher ABV than other lagers and a dark amber or brown hue. They typically have a malty flavor profile that is best in late winter or early spring. For this beer, you want a stange glass. Ideally, these glasses are tall and slim, but if you don’t have one at hand a Tom Collins glass will do. Enjoy Sam Adams Winter Lager, Shiner Bock, or Yuengling Bock in one of these glasses.

One other glass perfect for lagers is the weizen. Obviously, a Weizenbock would be ideal in this glass, but it is just a slightly curved variation of the Pilsner so many pilsners would taste fine as well. Great beers for this glass include Sam Adams Boston Lager, Dos Equis Amber Lager, and Vienna Lager of any kind.

These quality beer glasses are sure to serve you well with any lager. However, with the ever-evolving nature of modern beer, people have gone to some Pretentious extremes to get the craft beer glassware they need. That’s not an opinion either, that’s the name of The Pretentious Beer Glass Company. Owner Matthew Cummings creates glasses the old fashioned way and has been experimenting with beer glass styles the likes of which the World has never seen.