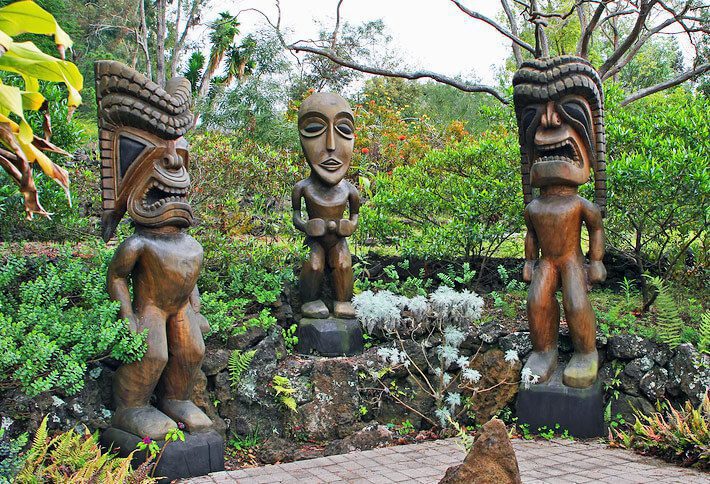 History of the Tiki Culture

Most often when we hear the word “Tiki” we think of carved wooden statues with piercing eyes and a menacing scowl. Some statues wear expressions of great joy or spiritual balance, while others may look more troubled or sad. The history of tiki culture dates back to ancient Polynesia. Such carvings were first discovered in Polynesia, and tiki carvings are said to represent a Polynesian God. They’re an integral part of South Pacific mythology, culture and history.

Similar to the way the Christian religion sees Adam as the first created human, Maori mythology refers to Tiki as the first man. One of the most popular legends states that Tane created the first man, Tiki, then made a wife for him. Another version, however, says Tiki mixed his own blood with clay to create the first human, while another popular variation of the story claims that Tiki lived a lonely life and craved companionship. He was overjoyed when he saw his reflection in a pool of water, but his joy quickly faded as the image shattered when he dove into the pool in an effort to embrace his new-found friend. In his anguish, he covered the pool with dirt, and the earth gave birth to a female companion.

The sheer number of legends surrounding Tiki is quite astounding—possibly because so many island cultures pay tribute to Tiki Gods. The four major Hawaiian Tiki Gods are Ku the God of War, Lono the God of Fertility and Peace, Kane the God of Light and Life, and Kanaloa the God of the Sea. Ancient followers worshiped these Gods through prayer, chanting, surfing, lava sledding and even human sacrifice. 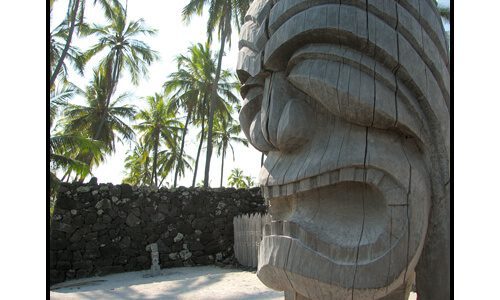 Tiki carving is one of the oldest art forms known to man, and all original Tiki carvings are unique. Each island culture introduced another variation to the carving technique. In most tiki cultures, Tiki statues carved by high-ranking tribesmen were considered sacred and powerful, and these were used in special religious ceremonies. Tiki statues carved by anyone other than a high-ranking tribesman were used simply as decoration.

Some island people still believe in the power of the Tiki, just as some statues are created to be used as focus objects for ceremonies—similar to voodoo rituals. Statues carved with threatening expressions are often used to scare away evil spirits, and others with more amicable expressions are created for use in religious ceremonies, healing services, or to bring good luck.

Each individually carved Tiki statue, whether stone or wood, displays the artistic creativity of its time. Many archaeologists believe the statues each have a unique story to tell, and that these specific symbols and carvings represented aspects of ancient life. For example, some carvings include spiritual symbols or other signs of devotion to the Gods they may represent.

Some of the most famous Tiki statues in the world reside on Easter Island. Volcanic in origin, as are several other islands in this region, Easter Island is located in the Pacific Ocean. It is the world’s most remote inhabited island, located about 2200 miles off the coast of Chile. Traditionally, the island has been known as Great Rapa or “Rapa Nui.” The most ancient known name for the island is Te Pito o Te Henua, or “The Center (The Navel) of the World.”

Most of the Easter Island Tikis are carved directly out of the lava rock from the Rano Raraku volcano, and more than 880 statues have been discovered and inventoried. Some are as tall as 33 feet, but the average size is 14 feet. It is estimated that nearly 200 men were required to move a single statue from the place it was carved to its resting place.

Society’s fascination with Tiki culture and art spurred him into mass popularity in the 1930s. Carvings and other Polynesian art became some of the main focal points for tropical restaurants and Tiki bars around the world. The first bar and restaurant with focus on Tiki culture was opened in 1934 by Ernest Raymond Beaumont-Gantt. Beaumont-Gantt later changed his name to Donn Beach to match the name of his restaurant, “Don the Beachcomber.” The restaurant featured exotic drinks, flaming torches and Cantonese cuisine.

In the early 1940s, when many soldiers were returning home from WWII, the “Trader Vic” chain of restaurants was introduced and quickly grew in popularity. Creator Victor Bergeron also decorated his restaurants in tropical fabrics, rattan furniture and flaming torches. Soldiers returning home from the South Pacific were familiar with the cuisine and decor, and with this familiarity spurring its popularity, the island style quickly found its way through many other establishments and homes in the United States.

The 1970s saw a decline in Tiki bars, as disco became the predominant night club scene. Never fear, the 1980s revived Tiki culture once again! Teenagers became interested in Tiki Gods, and the middle-aged became nostalgic and sentimental over parties their parents had hosted when they were young.

The most modernized Tiki restaurants and bars maintain their tribal roots; they still display their brightly colored fabrics, flaming torches and statues. Some have incorporated lounges, live island bands, even thundershowers and stage shows. Rum-based drinks like the mai tai and Zombie still flow freely and the Tiki Gods maintain their scowling disposition.