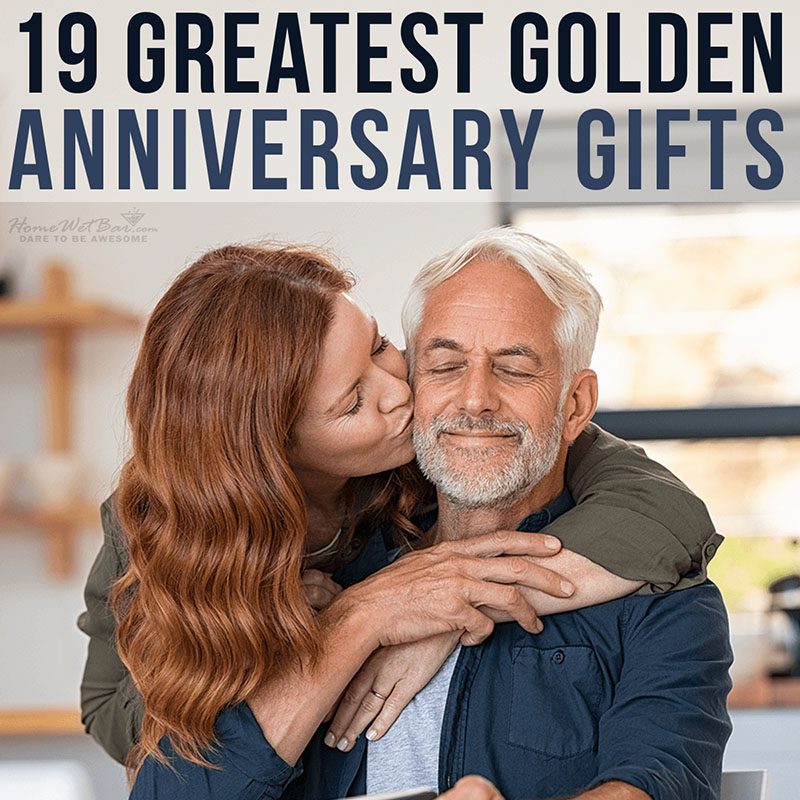 Celebrate 50 Years Together with Our Awesome Golden Anniversary Gifts!

50th anniversaries are rare occasions, so when they come around, they deserve to be celebrated in full! You want to congratulate the couple you know who’s celebrating their golden anniversary with an awesome gift, and since both the modern and traditional 50th anniversary gifts are golden gifts, but how do you find gifts that are gold but also super awesome? Well, you’ll want to look for golden anniversary gifts that are sentimental, memorable, and will help them celebrate the milestone occasion. These gifts don’t have to truly be made of gold either, but rather have an aspect of them that is “golden.” Even if you aren’t sure what gifts fall into these categories, fear not. We’ve found the greatest 50th anniversary gift ideas that will make the lovebirds swoon.

A super fancy, personalized gift that helps them celebrate their anniversary in a great way? Say no more! This gorgeous boxed decanter set is just the kind of anniversary gift that any couple would want. The handsome golden customization on the box will stand out to them on their 50th wedding anniversary, as will the high-quality glassware as they toast to a wonderfully long marriage. Every year from here on out they’ll take this beautiful glassware from its handsome box and repeat that toast.

A Rose Encased in Gold

Flowers are always a good go-to gift, but you want your present to them to last forever. That’s why you need to get them this beautiful anniversary rose! The gold surrounding the rose will always make them think of their 50th anniversary. It’s one of the most creative 50th anniversary gift ideas that the couple will think is so stunning, they’ll want to keep it in a super secure location so it stays safe and sound.

Get them a golden anniversary gift that’s super unique. This spigot decanter with its golden-colored oak base is a beautiful gift that they’ll cherish forever! They’ll think the gorgeous ship sailing through their favorite spirit is lovely, and it will remind them how all the adventures they’ve had during their 50 years together. They’ll definitely appreciate how easy it makes getting a drink when they want to celebrate their anniversary or another special occasion.

A Wine Barrel of Fun for Their Anniversary

After 50 years together, they’ve come to appreciate even the littlest of things, especially when it’s something the two of them can do together. This wine gift set is so cool that they’ll definitely want to use it as soon as possible after opening it. However, before they top off their new glasses with their go-to Riesling or Merlot, they are sure to see the customization of their wedding date and name, making this one of the most special gifts they’ve gotten in years!

The last 50 years have definitely seemed like a party for them at times. That’s why this impressive Gatsby sign is so fantastic! With this sign hanging in their home, they’ll always think of how much they’ve been through together and how excited they are for the many more years together filled with good times. They’ll love how the golden detailing brightens up whichever room they want to hang it up in.

A gold, gorgeous keepsake to display in their home? Sounds perfect! This handsome glass clock is one of the most beautiful golden anniversary gifts out there. It is the perfect reminder of their love for one another that has lasted the test of time! They’ll really appreciate that this gift is such an attractive decor piece that is perfect for the fireplace mantle or above their wine glass cabinet. With a gift this good looking, they won’t be able to wait to show it off to everyone who enters into their home.

A gorgeous golden gift could easily make their day on their 50th anniversary. This bar tool set is fantastic because not only is it painted in a beautiful golden color, but it’ll provide the couple with nostalgic memories after they make cocktails that they enjoyed together when they were young. They’ll really enjoy creating different concoctions for friends and family as well using this set, and they’ll always remember their golden anniversary as the day they received this brilliant present.

Amazing Cutting Board in the Kitchen

This custom bamboo charcuterie board is a simple yet gorgeous 50th anniversary present that they’ll adore. There is nothing quite like getting a couple a gift that is as functional as it is good looking! They’ll love seeing their name and wedding date engraved into the gorgeous golden-hued bamboo board whether it is peaking through the food they’re chopping up or when it’s cleaned off and displayed in their kitchen. When they have friends or family over, it’s also the perfect way for them to serve food too!

The best 50th anniversary gift ideas involve indulging in delicious goodies! This golden gourmet gift basket is phenomenal because it will let the happy couple enjoy gourmet snacks such as toffee popcorn, lemon wafers, maple peanut brittle, and many others. They’ll be so thankful for this amazing gift basket that will have them indulging in scrumptious snacks for a while!

Toast to the Future

The past 50 years have been filled with laughter, smiles, and many drinks together for the remarkable couple. Give them this whiskey presentation set that when it’s filled with golden whiskey will be a gift that represents not only how amazing the first 50 years were, but how the rest of their years will be. This gift is terrific because it gives them new glasses to enjoy drinks together whenever they want in a convenient place inside this acrylic stand. They’ll toast to the rest of their days together!

For One of Life’s Most Precious Moments

There are few gifts that are better for any couple than an amazing Precious Moments figurine! Especially for a couple celebrating their 50th birthday, this 50th anniversary figurine is an amazing present. It’s hand-crafted and painted so it’ll feel even more special. They’ll love being able to see themselves in this beautiful figurine. They’ll display this amazing gift in their house for all to see!

Author Jacqueline Winspear once said, “Memories are links in a golden chain that bind us together.” A couple celebrating their 50th anniversary has so many memories that bind the two of them which is why this shadow box gift set is one of the most sentimental golden anniversary gifts. They’ll absolutely love storing small items, such as photographs, bottle caps, or wine corks, inside this handsome, customized shadow box. Each one will represent the memory of an experience the two of them shared. They’ll really enjoy periodically pouring themselves a glass of wine and reminiscing on all the amazing times they’ve had together, especially on their anniversaries.

Milestone anniversaries call for keepsake gifts such as this golden bath towel set! It’s a unique yet amazing gift that the couple will cherish forever. It’s one of the most amazing golden anniversary gifts because the couple will definitely love displaying these unique towels in their guest bathroom, letting every guest know that they made it to 50 years together.

There’s no time like a 50th anniversary for the two sweethearts to fully enjoy one of their favorite things. With this Glencairn whiskey tasting set, they’ll have a blast! They’ll adore the golden clasp on the wooden box, keeping their precious gift safe inside it. Trying different fancy whiskeys using this set will bring them a lot of enjoyment on their special anniversary.

Why should they continue to use normal silverware to celebrate 50 years together when they could use this gold flatware set? They’ll feel so fancy having such unique, handsome spoons, forks, and knives to use when they’re eating a fancy celebratory meal or even any everyday meal. Since this set is made for a party of four, they’ll greatly enjoy inviting two friends over and serving them a fancy meal using this flatware!

Whether they fell in love in high school like Sandy and Danny from Grease or at another point in their life, they’ll feel like teenagers again when they have this carved heart personalized sign hanging up in their home. This is one of the greatest 50th anniversary gift ideas because now, they don’t have to go find that tree they may have placed their initials. Instead, they can see their eternal love for each other every single day on this unique gift!

An expensive bottle of wine is always a fantastic gift, but the golden anniversary calls for a gift that goes above and beyond. This golden-etched wine bottle gift box is an amazing 50th anniversary present because it includes all the tools they’ll need to enjoy the bottle of fancy wine you included inside it. The customization is special, too, and they’ll like to store a bottle of wine inside this box for their next special occasion.

Get the couple a gift that not only looks great in their home but has a deeper meaning as well. This gold accent mirror is phenomenal because they’ll love standing together, gazing into the mirror, and thinking about both how far they’ve come and what’s coming in the future. They still love the way they look standing together, even after all these years!

This whiskey gift box set is one of the simplest golden anniversary gifts that the couple will also adore, with the golden clasp on the box always reminding them of their 50th anniversary. Even after so many years together, one of their favorite pastimes is sitting and enjoying a drink together, because it’s a simple way for the two of them to relax with each other’s company. The two of them will love nothing more than filling up these glasses with their favorite drinks and enjoying each other’s company on their anniversary.