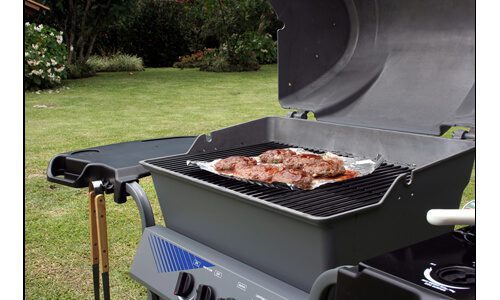 When it comes to grilling, there’s a “grate” debate: Gas or charcoal? The sides are pretty evenly divided, and in the end, only you can make the decision on what’s best for your taste buds, your lifestyle and your budget. But getting to that decision is a delicious exercise worth wading through.

Gas grills start quickly, get hot fast and usually cook evenly. Charcoal grills tend to be less expensive, take up less room, and produce more of a smoky flavor to the food. The decision on which is the better option for each person basically breaks down to three important factors: taste, time and cost. To choose the grill that fits you, you have to know and understand how you plan to use it.

The Case for Gas
If you are more of a weekend warrior with your grill, savoring every slow-cooked turn of the meat, then you probably want to go with charcoal. If you are someone who wants to grill after work so there’s no mess in the kitchen, then you might want to choose gas.

Gas-fired grills are fired by liquid propane that comes and is stored in tanks that can be filled up. They tend to produce a smaller mess, without the effort of lighter fluid, charcoal or ash. The propane gas burns clean, but some argue it doesn’t provide much flavor to grilled foods. Many electric grills add virtually nothing to the taste of foods, however the simplicity of flipping a switch and grilling is attractive to many people. Most models feature push-button ignitions, a consistent, steady heat source that’s ready to go within minutes, excellent temperature control.
In an effort to address the taste issue, some gas grill manufacturers have built models that add ceramic flavor bars. These bars catch grease drippings and vaporize them into smoke that infuses more flavor into what’s being cooked.

The gas grill was made for the general consumer for the first time in 1960, invented by Walter Kozoil. Now, even though they can cost several hundred dollars, they outsell their charcoal counterpart by 30 percent. If cost is important in your decision, then you probably want to look hard at charcoal grills. Most gas grills fall into the $500-$1,000 range.

The Case for Charcoal
Charcoal grilling does not offer the same cleanliness factor as gas, but it burns hotter for a better sear of the meat and it tends to produce a smokier flavor. But charcoal grilling takes more time than gas. Charcoal grills are also less expensive than gas grills, though the cost of charcoal will add up over the years. A standard kettle grill generally will cost about $50-$100. They are portable, cheap and usually last for several years.

But just being convenient isn’t necessarily the final deciding factor for charcoal enthusiasts. They point to the ritual of piling up the charcoal, tending to the fire, and moving food from hot spots to cool ones. They say it’s the process, much like a climb to the top of a mountain. It’s the satisfaction in knowing you climbed up there, even though you could have driven. They argue that when you trade in the process for the push-button convenience of a gas grill, you are missing the point.

There is a healthy discussion about the risks associated with the carcinogens that come from charcoal-grilled food, but the results seem to be inconclusive. Depending on how often you eat grilled food, you could have a big problem on your hands or nothing to worry about. When food is charred or burned, it forms compounds that are potentially carcinogenic. But people have to eat a lot of charred meat before it becomes a concern.

Which One is the Best?
One of the best-known grilling personalities in the world, Bobby Flay states in his book Boy Meets Grill that he prefers gas grills, because, “the real flavor boost (from grilling) comes from marinades and seasonings, and from quick searing directly over a very hot fire — which a good gas grill does as well as charcoal.”

There are pluses and drawbacks to owning a gas grill, just as there are advantages and disadvantages to the charcoal model. Many families are so divided, they have one of each. If it’s about getting out of the kitchen, and cooking outdoors, then it might make sense to double your pleasure with one of each. Some on-the-go families use the gas grill for cooking quick meals during the week. Then on the weekends, when they have time, they pull out the charcoal grill.

Now, some manufacturers are even trying to avoid the debate by making combination gas/charcoal models. These grills convert from gas to charcoal and back again with just a little effort. But what’s the fun in that? Pick a side and enjoy.

If you want to quit arguing and just grill, check out our BBQ Accessories and Grill Tools collections at HomeWetBar.com and GreatGiftsForMen.com.