16 Funny Christmas Pictures of Santa Claus Boozin’ It Up

There’s no way Santa could do his job without having a drink from time to time. He has to slide down chimneys, which are basically just filthy concrete horror chambers. His coworkers are scrappy little elves and flying livestock. He has to keep track of who is naughty and nice, and that makes me want to drink just thinking about it. So yeah, Santa deserves a beer when he gets home from work.  To fill your hearts and screens with a little more holiday cheer, here’s our favorite funny Christmas pictures of Jolly Ol’ St. Nick getting his drink on. 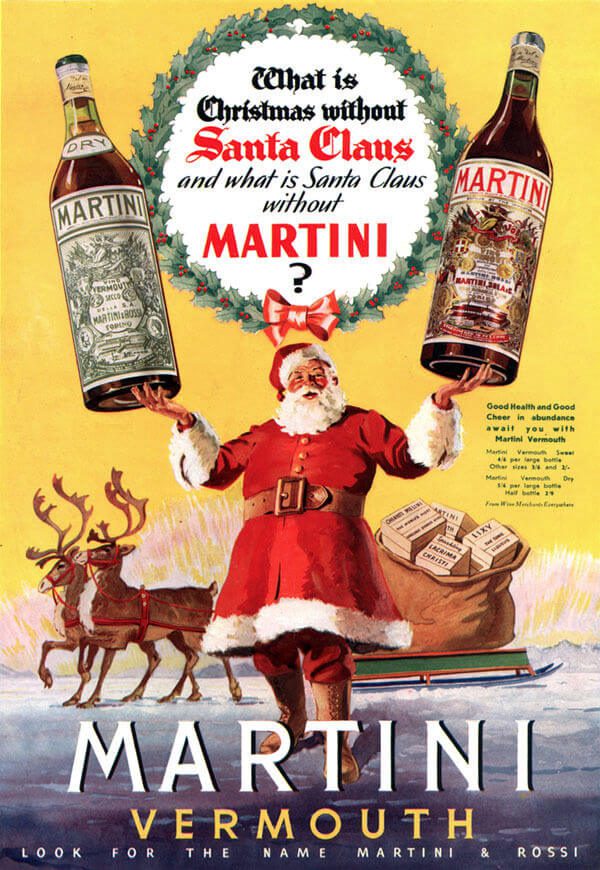 This vermouth ad raises the question, “What is Santa Claus without Martini?” I can tell you what: a stressed out mess. Vintage advertising is full of funny Santa pictures, but I love this one because of the larger-than-life sized bottles and the blitzed look on his face. I just hope Rudolph didn’t eat all the cocktail onions. 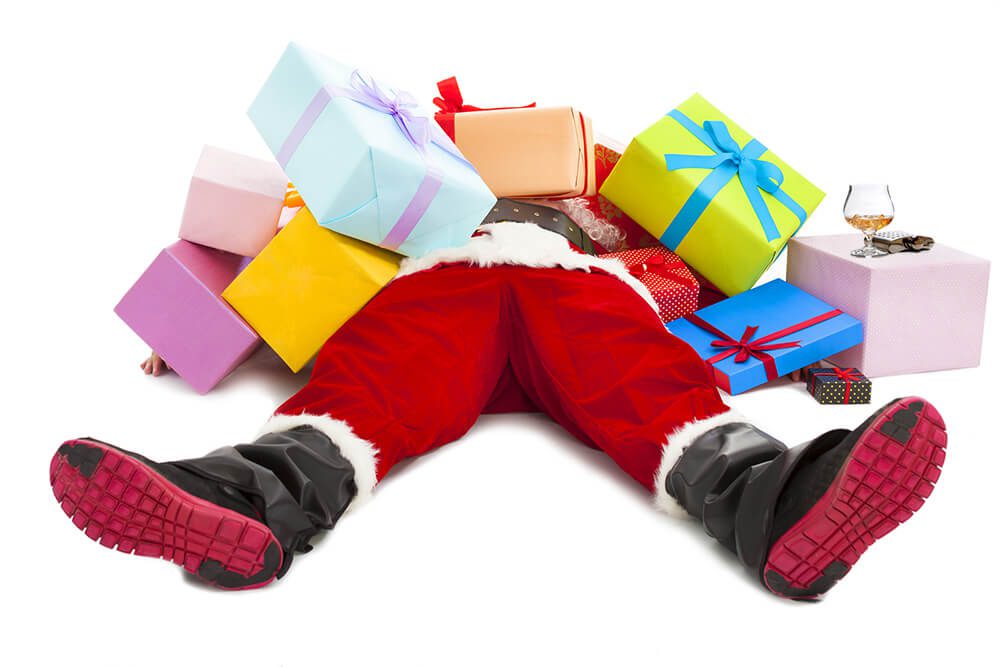 This drunk Santa Claus somehow got covered in presents after passing out on cognac. I like to imagine two different scenarios for how this happened. First, he passed out in the living room of someone’s house, and the reindeer started tossing gifts down the chimney to try and wake him up. A more likely story is that he was working at the mall that day, went into the stock room, and was trying to camouflage himself with packages, then things got out of hand. 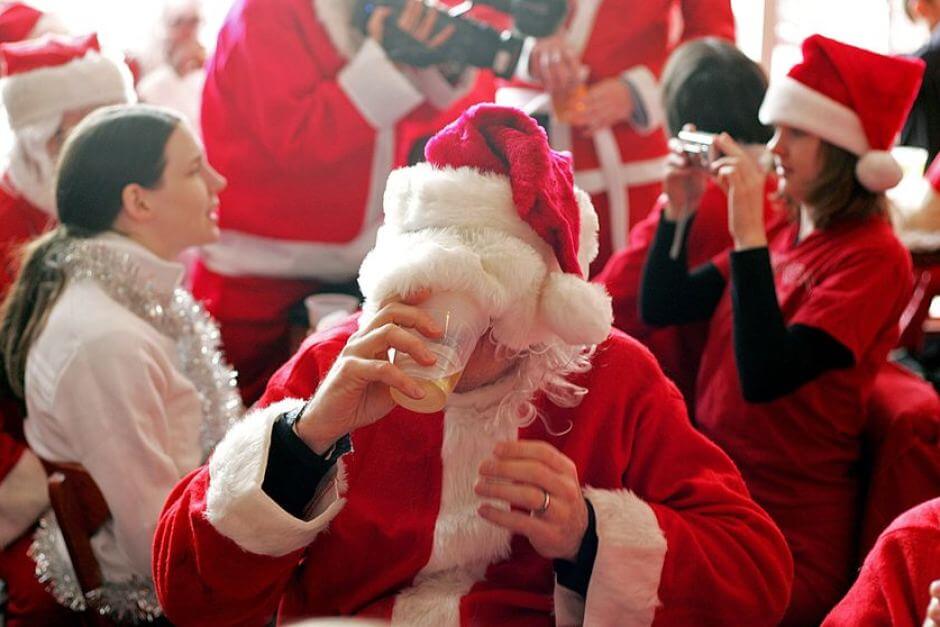 Ask any hipster, beards are cool, but they can get in the way sometimes. This Santa Claus drinking beer in a room full of festively dressed folks cracks me up because all you can see is a mound of whiskers and red velour taking on an almost empty party cup. Bottoms up! 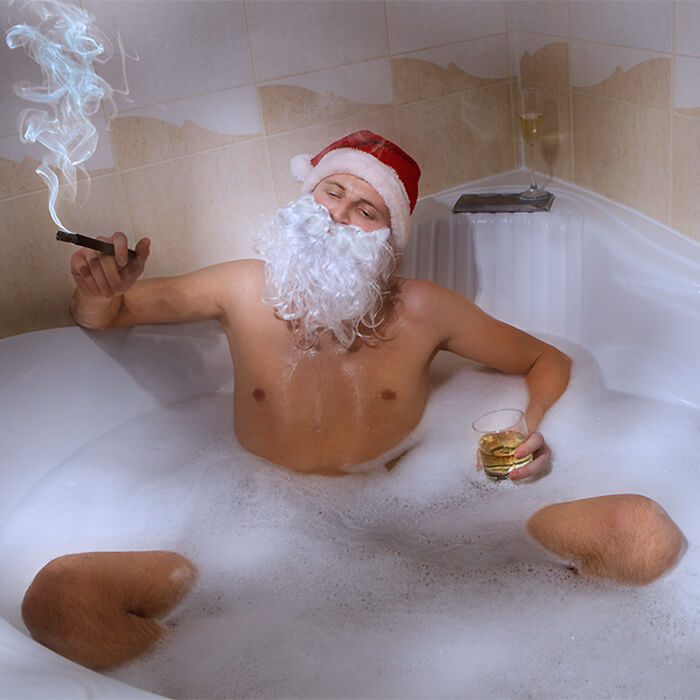 You know whoever took this photo has a great sense of Christmas humor. But I do have some questions about what’s going on here. There’s no ashtray, so does he just plan to ash in the tub? There’s no sign of Mrs. Claus, so who does that champagne glass in the corner belong to? For a guy who eats cookies all night long, who does he keep such a slim build? I guess we’ll have to let the mysteries be. 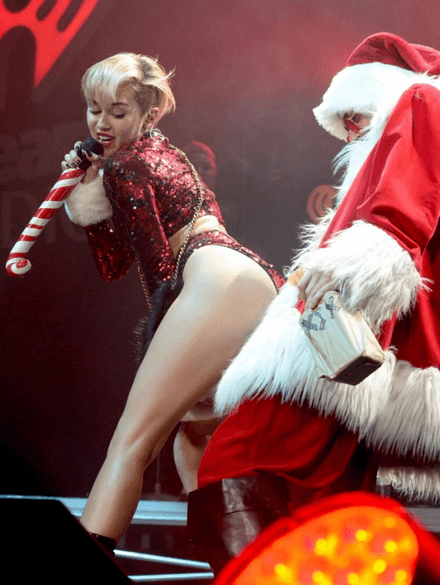 When Miley Cyrus comes to the North Pole, things get turnt up fast. You rarely see twerking in funny Christmas pictures, making this photo one of a kind. At least this Santa had the decency to put his booze in a brown paper bag, lest this picture be used against him at some point. 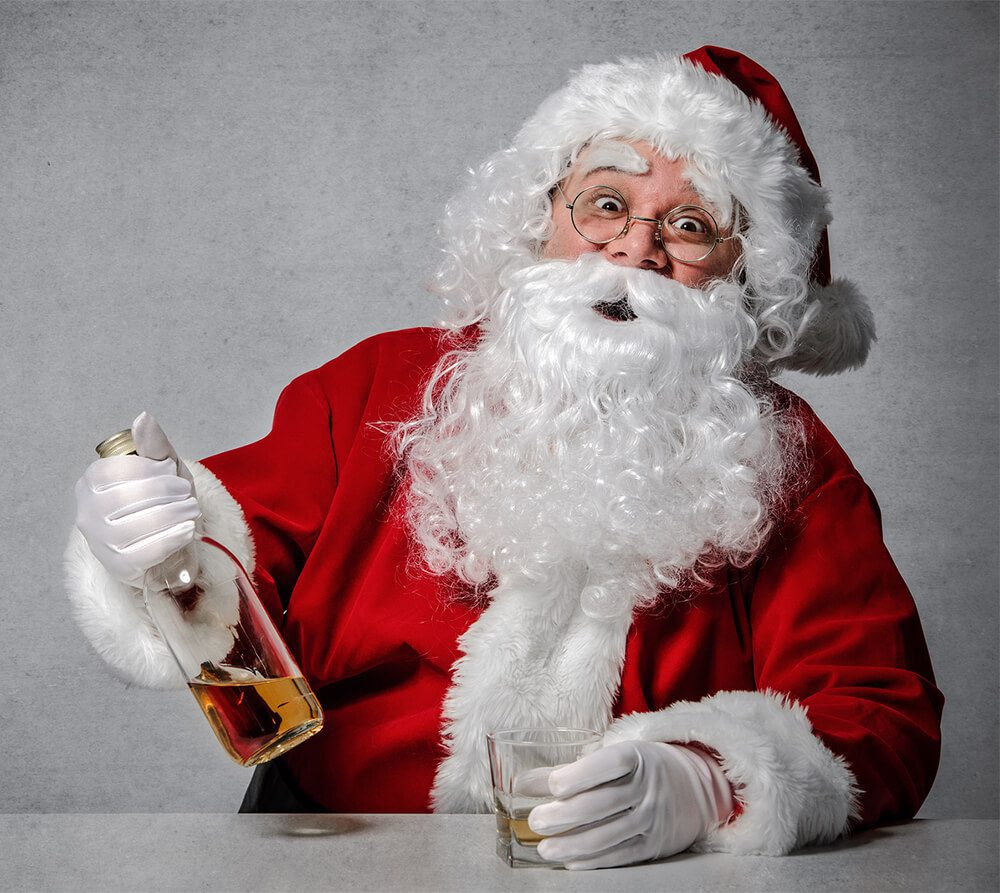 Not all funny pictures of Santa Claus require a back story. Sometimes the joy comes from the simplicity of just seeing a mirthfully tipsy St. Nick, a half empty bottle of probably Canadian Club, and a nice whiskey glass to keep things classy. 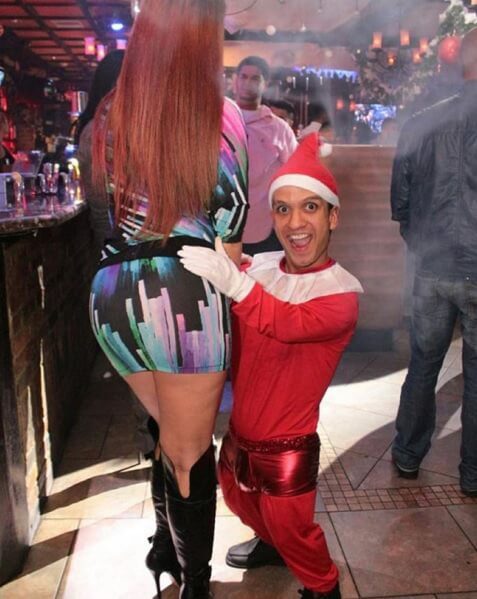 Is this really the North Pole bossman, or is one of his elves out wreaking havoc in disguise? It’s not often that you see a tiny Santa in shimmery trunks making a pass at a redhead in a spandex dress, so when you do, Christmas photos must go on Instagram. #ElfOnHerShelf 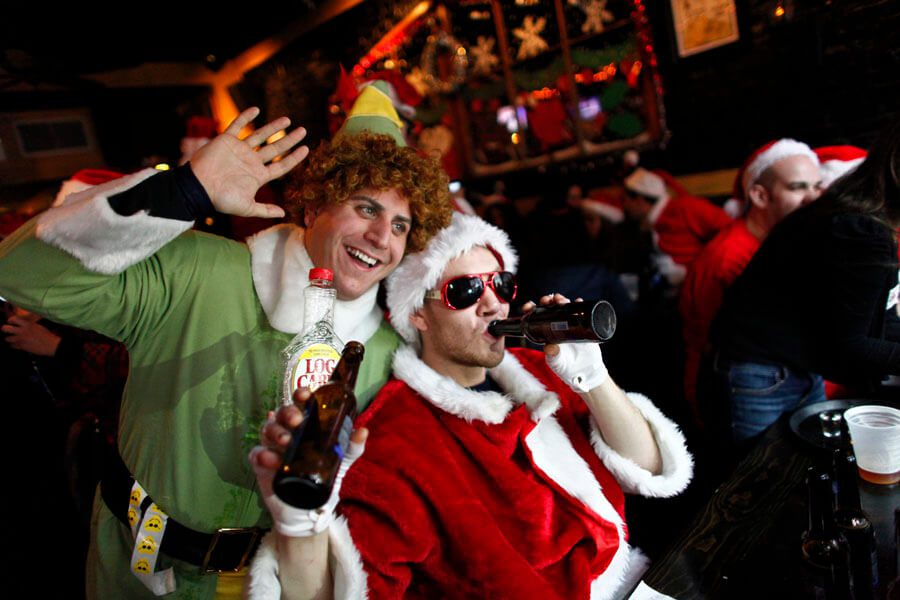 You can’t let Santa drink alone. We love anything that involves Santa at a bar, but when he brings an elf bearing stickers as his wing man, you know the eve is about to get crazy. 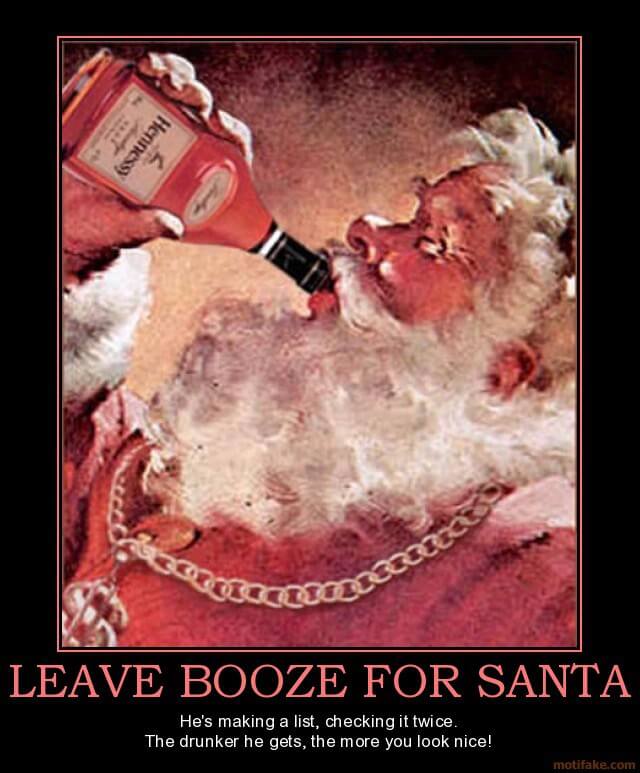 We found a lot of funny Christmas photos, but this is the only one that involves The Claus throwing back Hennessy straight from the bottle. He’s starting to look flush, though, so maybe it’s time to switch to club soda. 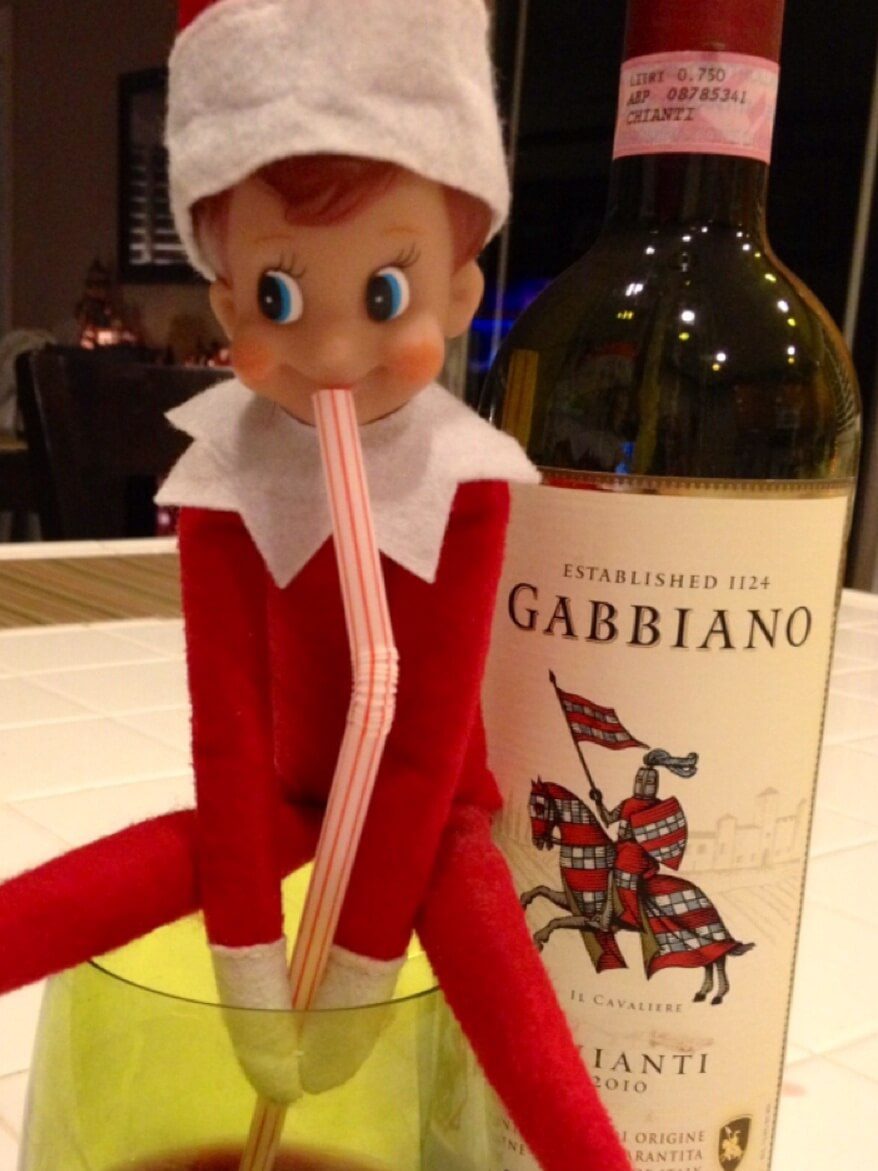 Again with the elves trying to steal Santa’s style! Elf on the Shelf is definitely the inspiration for thousands of funny xmas pics, but this one made the cut because drinking chianti through a straw is 100% hilarious, no matter who’s holding the glass. 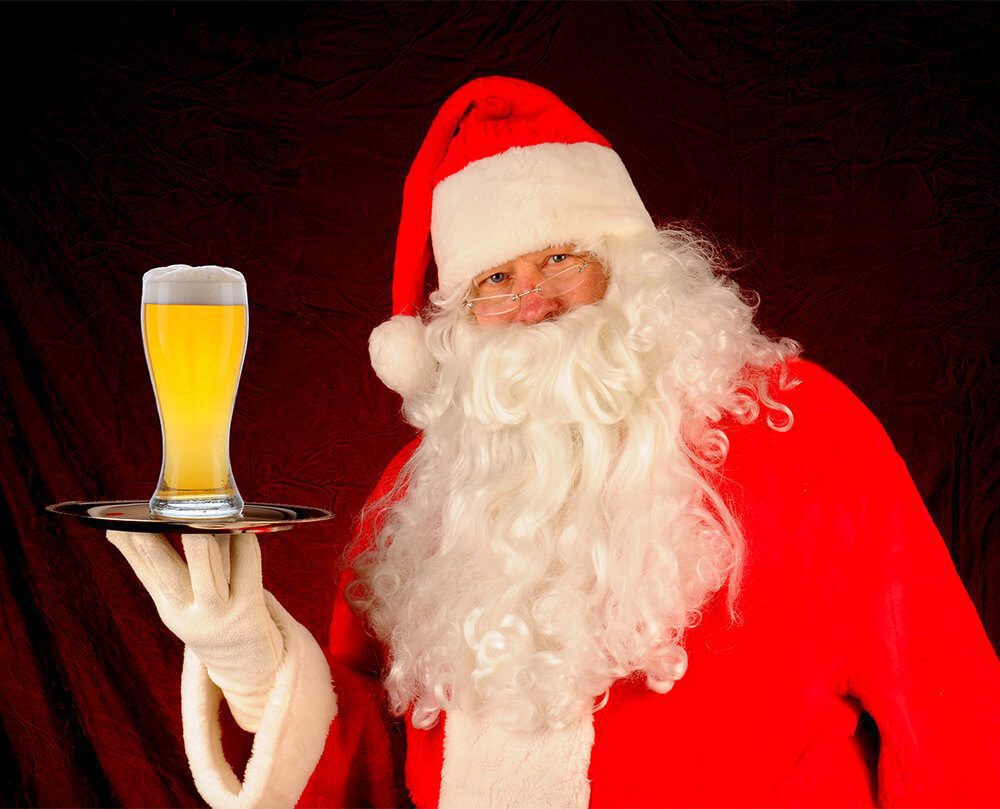 Santa walks into a bar on Christmas Eve, and orders a glass of beer. The bartender says, “Are you sure? You’ve got a long night ahead of you.” Santa replies, “You’re telling me. I finally got this girl from Tinder to go out with me, and then my wife walks in holding hands with Frosty the Snowman.” 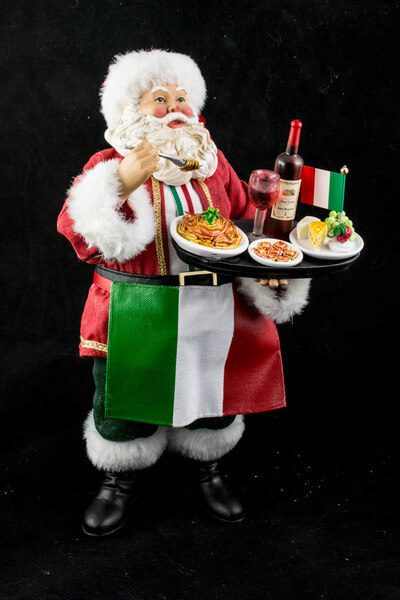 I’d move to Italy tomorrow if I could get assurance that Christmas always involves spaghetti, and Santa Claus drinking wine. One could definitely assume from his waistline that pasta dishes are pretty popular at the North Pole. 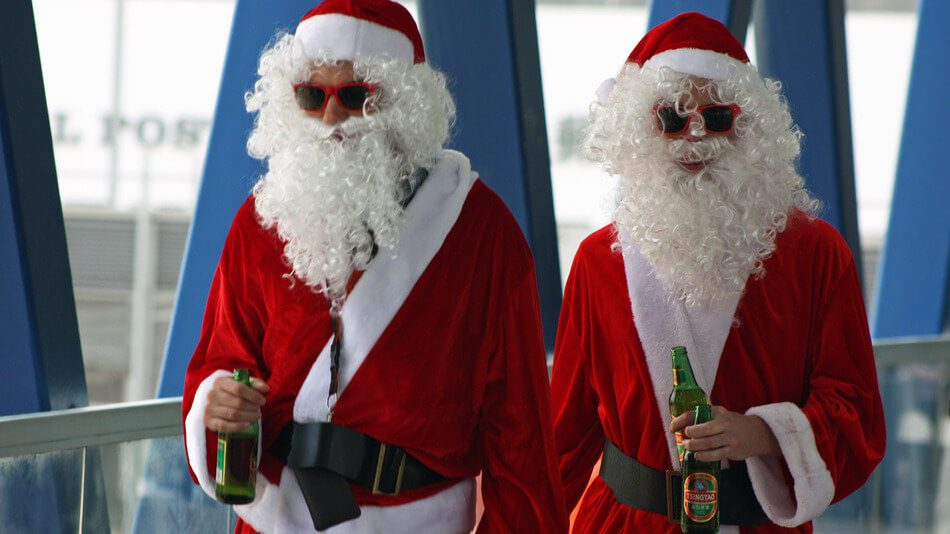 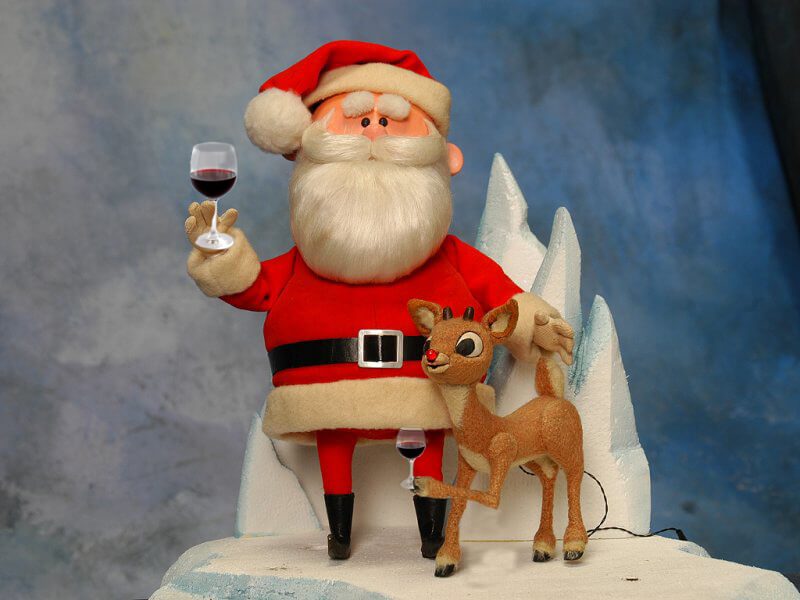 Photoshop is the gift that keeps on giving. Just take a still shot from one of the most beloved holiday movies of all time, and add a splash of wine to get Christmas funny pictures worth sharing. 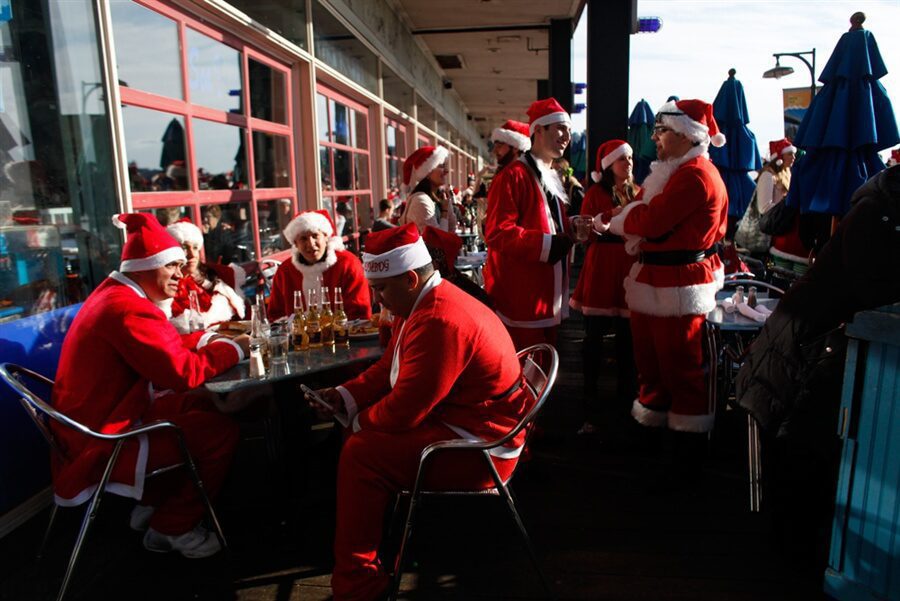 The Santa pub crawl is a holiday tradition that deserves larger scale recognition. The required uniform is warm, it’s easy to get lost in the crowd, and you get free reign to ask people to sit on your lap for one night. We decided to bookend our round up of drunk, funny Santa Claus portraits with another vintage ad. Aside from the oddly small stature of Father Christmas, he seems to be gazing just past the beer, as if he’s checking to make sure no one is around before stealing a sip or two of cold brew. No need to be sneaky, Santa! This drink is on the house.