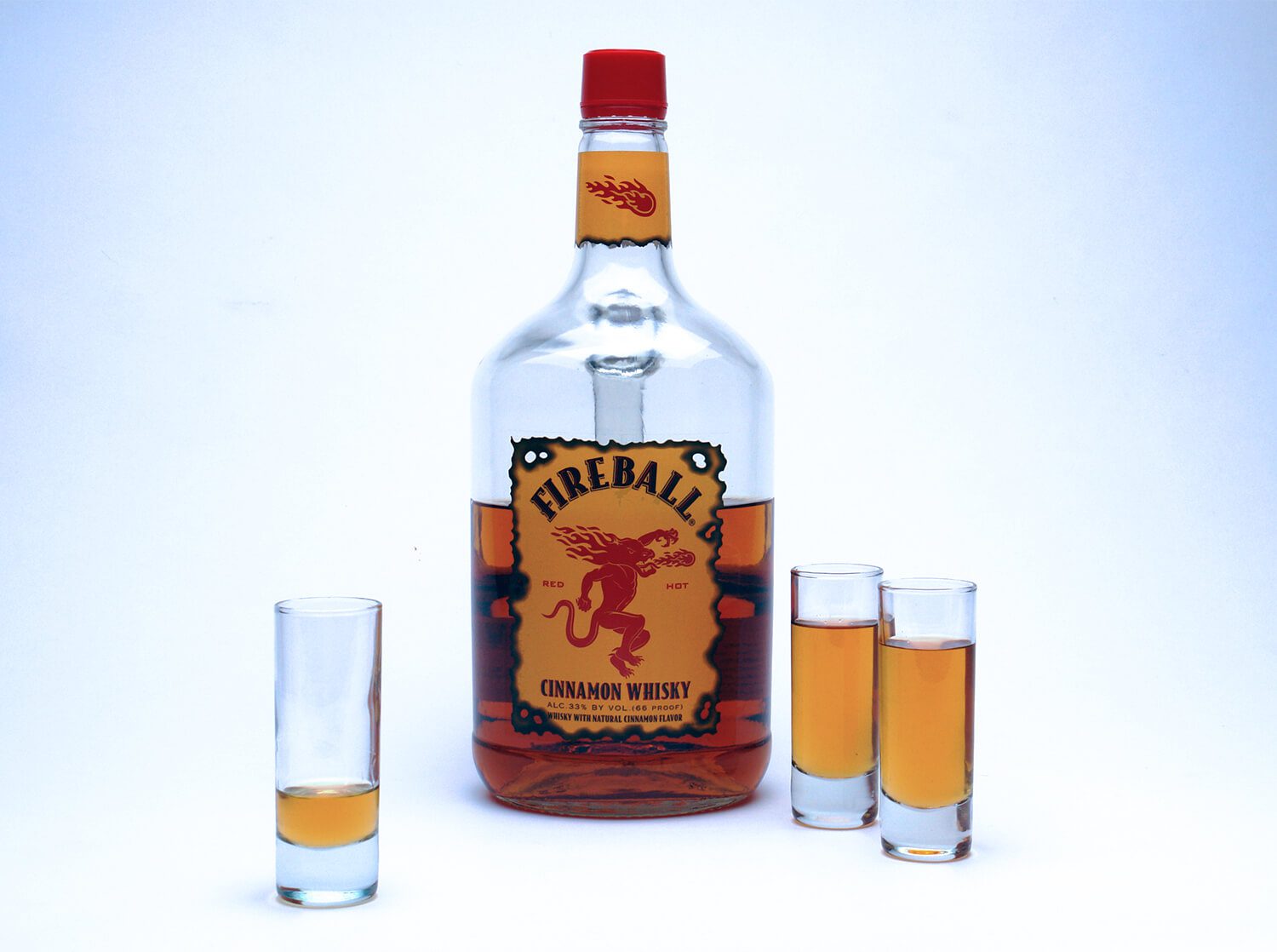 Fireball Whisky Facts to Bust Out at Your Next Party

Fireball reminds me of my ex, we have had some tumultuous yet fun times together. From tripping with a hard thud on the sidewalk to making crazy new friends, I have always gotten a helping hand from ol’ Fireball whisky. Although I have a love hate relationship with the devilishly delicious liquor, I’m completely psyched that the brand is growing in popularity. As an undeniably easy and versatile drink to order as a shot it is even gaining momentum in higher end bars and emerging as a new cocktail trend. What I didn’t know is that Fireball whiskey has a really interesting history, who would have thought this naughty underdog would rise from the ashes like a beautiful, frat party phoenix. Here are some fun factoids about Fireball that you may not be privy to. 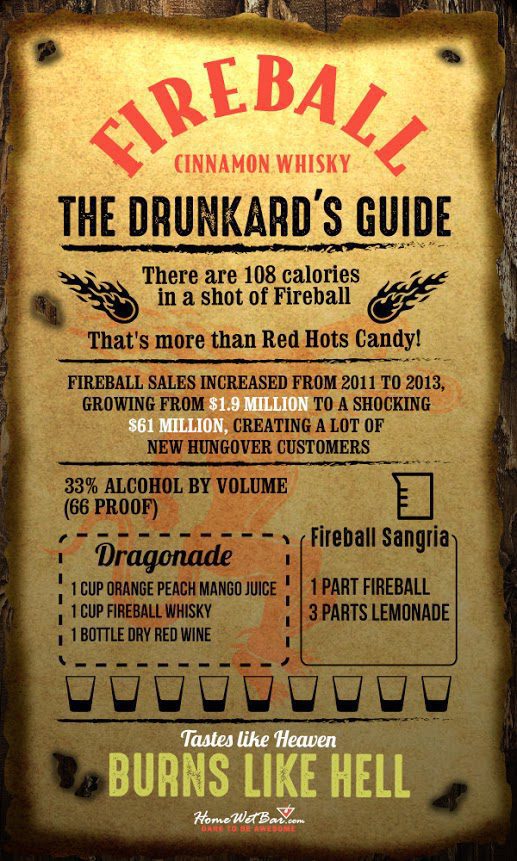 • Fireball Whiskey was created in Canada in the 1980s and was actually owned by the now defunct Seagram’s Company.

• Fireball Cinnamon whisky was not always it’s calling card, it was originally named Dr. McGillicuddy’s Fireball Cinnamon Whisky. Say that three times fast! Thankfully, I don’t have to say that after five beers.

• Fireball whiskey was originally developed to ward of a frigid arctic blast that Canada experiences on the reg. Now it is warming up millions all over the world, awe.

• Upon its re branding, the drink was marketed primarily in Nashville, TN and Austin, TX to college crowds. Then promoter Rick Pomes would engage the entire bar to all take a shot together, making all those eager fresh-faced college kids wanting more. Safe to say it worked.

• In 2014 Fireball whisky experienced a controversial propylene glycol or “antifreeze” debacle. What happened was the North American Fireball recipe was shipped to Europe where there are stricter food regulation laws in place. Don’t worry, Fireball is completely safe to drink (well in moderation)

• Looking for your next fun party game? Fireball even has an app, just go to the app store and download “Fireball: Dragons, Dice and Dares” onto your phone for a mixture of “Never Have I Ever” and “Truth or Dare”. I actually have to vouch for this, it’s pretty fun.

• Next time you need a cool fact to impress that chick that’s way out of your league at the bar simply order her a Fireball shot and seductively whisper “Tastes like heaven, burns like hell” which is Fireball’s cheesy tagline. Okay, maybe don’t do that.

• Fireball Whiskey sales increased by a huge amount from 2011 to 2013, growing from $1.9 million to a shocking $61 million. That’s a lot of new Fireball lovers.

The cinnamon whiskey is also growing in validity as it seems more and more cocktails are calling it out as an ingredient. I don’t know about you but I’m completely down with a Fireball cocktail trend. The following are a few of my favorite recipes, even if you don’t identify as a fan these may be just be enough to change your mind. 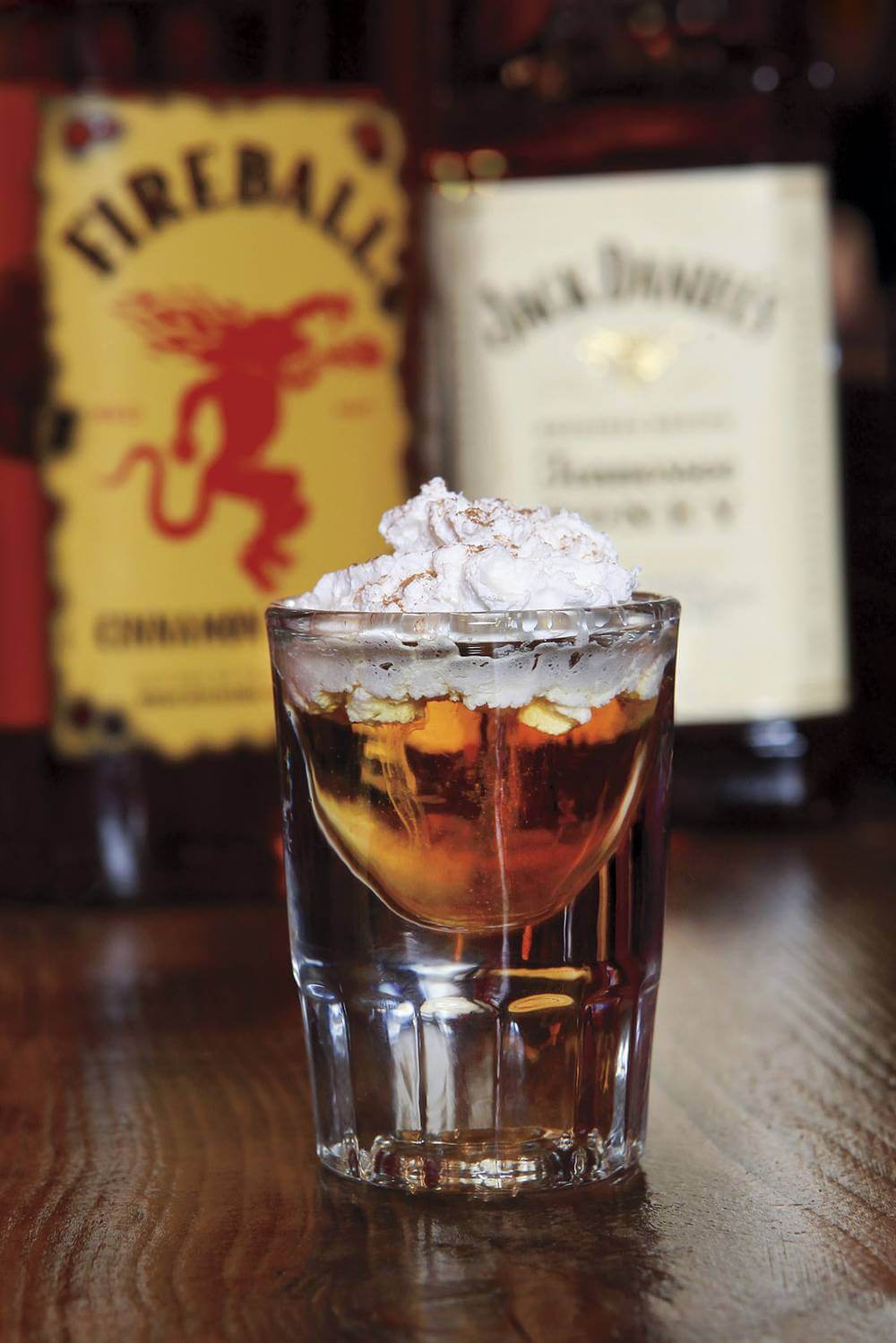 Look at this lil honey

When a straight shot of Fireball is just too much, then a delicious mixed shot is only a few ingredients away! This awesome Hot Little Honey fireball shot includes Tennessee honey, Frangelico, and whipped cream. 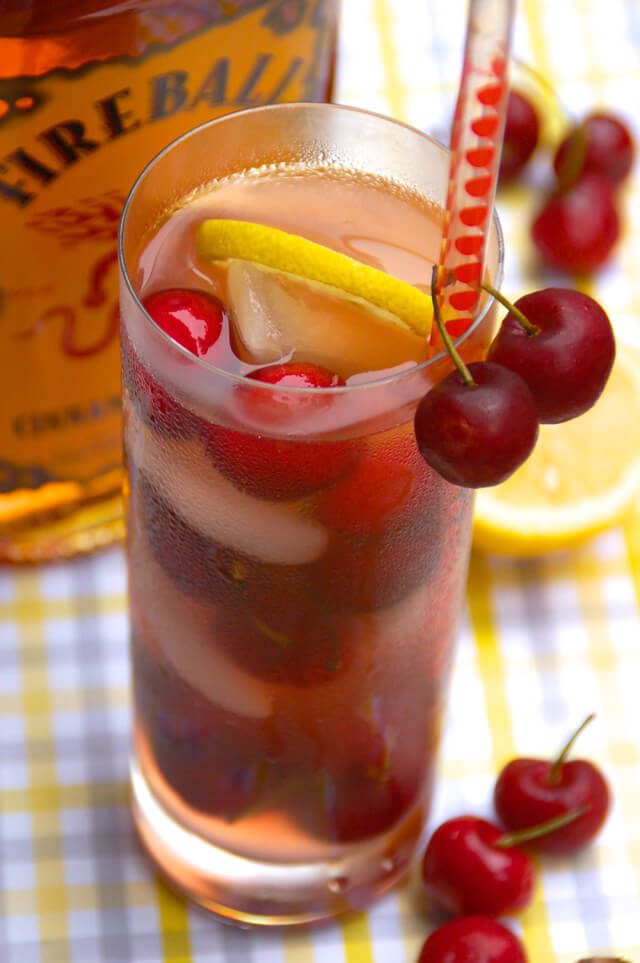 I’m a sucker for anything cherry related, especially when warm weather is in the mix. With Spring upon us, nothing sounds better than a cherry infused cocktail and a porch to sit on. With this Cherry Tree Fireball recipe calling for fresh cherries, cherry lemonade, and a warm kick of Fireball I think I may have found my next refresher on a fun Summer night.

While Fireball, has been a crazy girl staple for the past few years, newcomer “Not Your Father’s Root Beer” is making a splash as well. Want to get real crazy? This insane fireball cocktail recipe calls for both! Not only utilizing Fireball and the sweet alcoholic root beer, this Pirate Bill’s Brew drink recipe also includes spiced rum, this drink sounds totally boozy, ARRRRR ya ready? 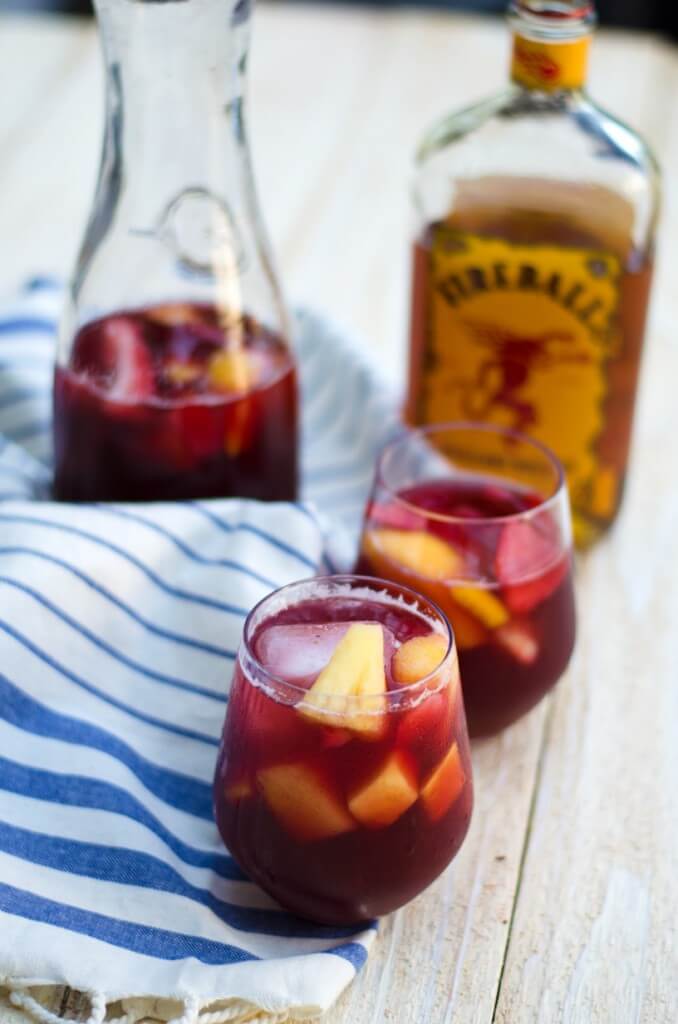 If Fireball Sangria is wrong, I don’t want to be right. With just three ingredients (mango juice, dry red wine, and fireball), this fireball recipe is perfect to whip up when you are having company over. I especially think this would be the perfect party drink punch to serve at a pool or outdoor party. 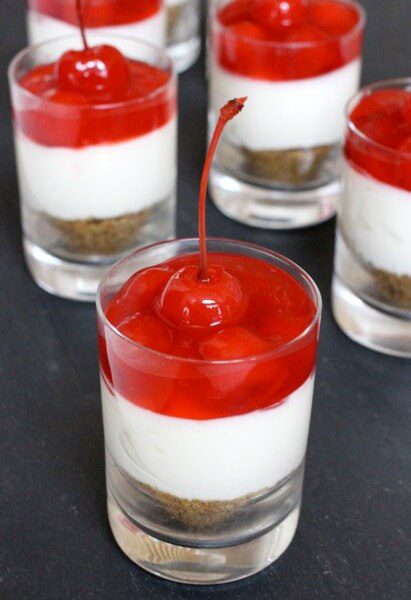 Okay, so these may not make you get turnt, these will make your taste buds scream for more. Not only do they look pretty but they also taste great. Serve Fireball Whiskey Cheesecake Shots with a mini spoon and make it an impressive dessert course at your next fun dinner party. 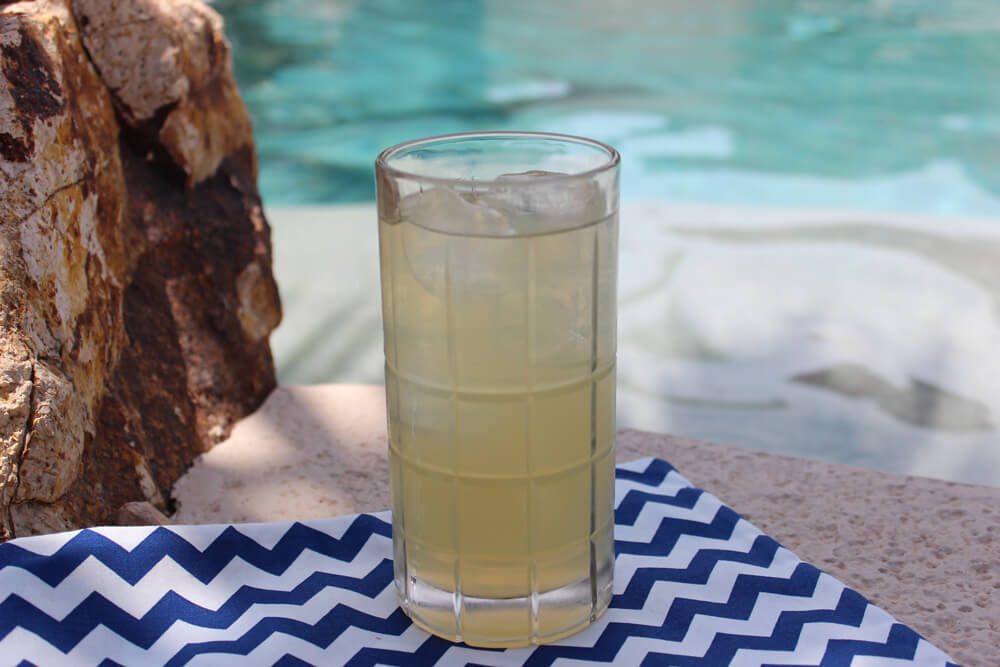 I have to say when I first heard of Dragonade, it sounded like a frat party. And as I looked at it more, I concluded, yup this is a frat party. Only calling for two ingredients, Fireball and lemonade, it is a great cocktail recipe to take advantage of on a hot Summer day by the pool. What I also find that is ultra amazing is that this recipe is featured on fireballdrinks.com. That’s right there is a whole website dedicated on making your life boozier with Fireball shots and cocktails. You’re welcome.