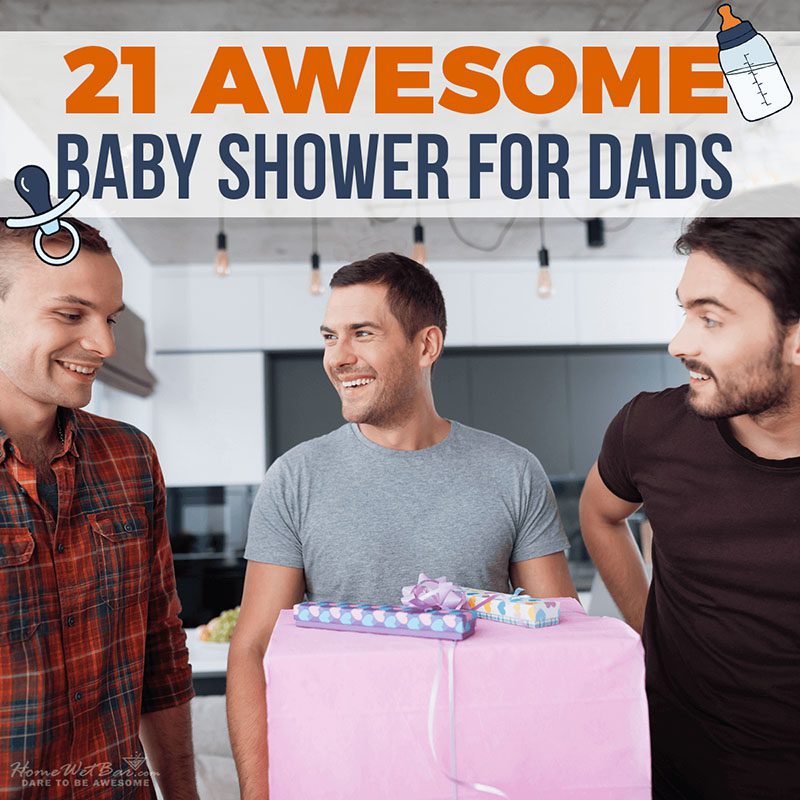 Make the expecting father feel special by throwing him his very own baby shower for dads! These dadchelor parties are a great way to get him all the things new dads will want when they become a father. His party is the perfect opportunity to get him gifts that any new dad will appreciate, while also being something totally cool that he can enjoy when the day is done.  Although becoming a dad is super exciting (and a bit scary!) your gifts will be the perfect way to prepare him for everything that comes with fatherhood!  Like many, you may be wondering: What could a new dad need? What sort of gifts do you give at a baby shower for dads? Where do I even begin? We’ll, we’ve got gifts that are guaranteed to make this life as a new dad easier than he ever thought possible.

Arm Him with Dad Tools An ammo can filled with everything dad could need to unwind after a week of work and diaper changes will be the gift he looks forward to using the most. Once the baby has been put to bed, he can relax with his favorite drink or cocktail. He can even fill his custom ammo can with baby toys, diapers, or snacks to be armed for any potential baby needs that come his way. Plus, the whiskey stones make the perfect new father gift; now, if he needs to take care of the baby, he won’t have to worry about ice watering down his drink!

A Gift that is Beyond a Shadow of a Doubt 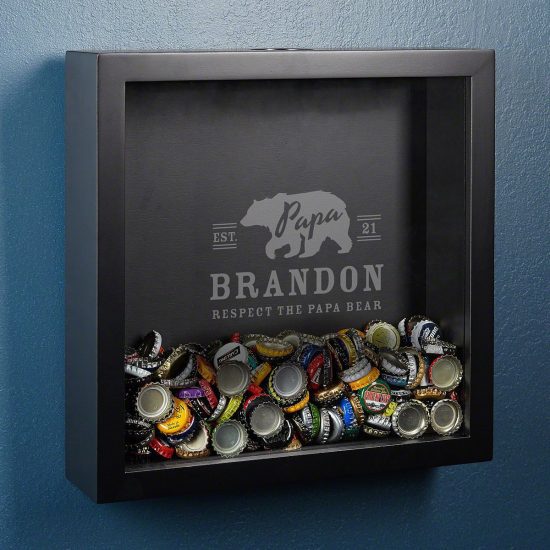 Every dad likes to keep memories of their children. So, give him a shadow box when you go to a baby shower for dads, this way he can show off his awesome collection of memories instead of stowing them away. This gift allows him to collect anything he likes and have it displayed within his home! Your fantastic dad-themed shadow box will show off anything from baby trinkets to beer caps, he can literally use it for anything, and he gets to see his collection grow thanks to the engraved glass! When he takes his child on a picnic or to the park, he’ll love looking like one of the hippest dads out there when he is seen carrying his own custom beer caddy. He can enjoy a cold brew out in a park with his kid or even use this for other activities too. This awesome dad gift will also work great when he has time away and goes on a hike, tailgating, or any other event that he’d love enjoying a beer at. Every parent eventually needs a break from adulting duties from time to time. Make his break spot known with a personalized garage sign. When he’s in his space, everyone will know that this is a hideout for a few minutes while he does some of his favorite hobbies or projects. He likely already has this space, so make it official with your awesome gift!

For the Neat Dad 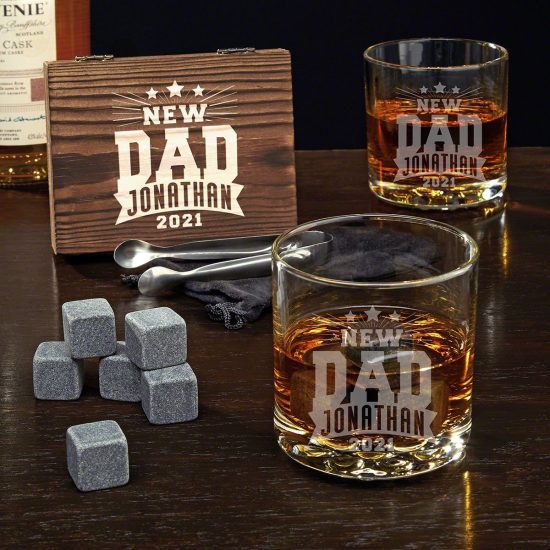 Make him feel like a classy, old-school (but still new!) father with this whiskey stone gift set. Thanks to the custom engraving on this awesome set, he’ll feel far more confident in his fatherly abilities than he ever thought possible. But don’t forget that these are for his dadchelor party too! With this sweet set, he gets to celebrate with a toast to fatherhood at the party right away. Thanks to your fantastic dadchelor gift he will always be prepared for a drink whenever he gets time on his own, when he needs to unwind, or to celebrate a major dad milestone! Guys love tactical gear, so make him even more excited to carry his baby around all day with a tactical baby carrier. He’ll feel like he’s a brave soldier carrying on with his baby battle buddy as he goes through his day. This awesome carrier securely holds his baby while leaving his hands free for everything from tactical bottle feedings to stealthy hand signals for when the baby is asleep and he doesn’t want to wake it! 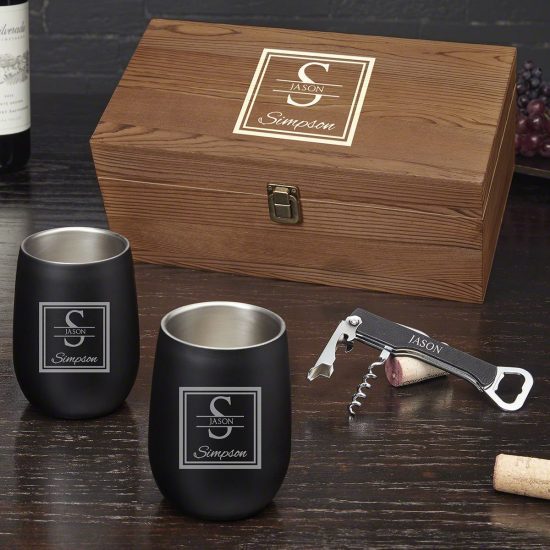 Whether he is a wino or a connoisseur of cocktails, this stainless-steel gift set is perfect for him. With a child in the house, things get knocked over and broken on occasion—but not with these glasses—they’re nearly indestructible! He can even keep the whole set neat and tidy inside the keepsake which will keep it far away from his child who may be tempted to play with such awesome looking glasses (and who could blame them, really?). Plus, this set will keep his favorite drink chilled even when he has to get up to do fatherly duties. Becoming a dad is a huge deal, it is a truly life changing event. Mark the occasion with a sign that shows off the date of his child’s birth as well as encourages him to be the awesome dad you know he’ll be. This sign makes a great gift at any baby shower for dads because it is something he can display and make becoming a dad feel real!

A Hoppy Start to Becoming a Parent 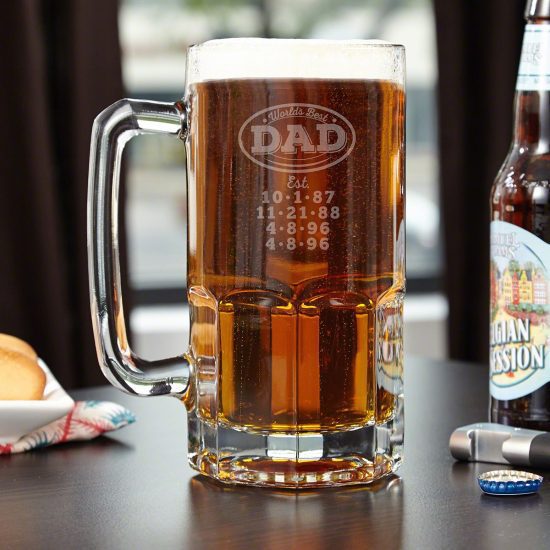 Get him a mug that he can top off with beer and not have to worry about a refill for hours as a fantastic dad gift. The last thing he wants to do after a day of being up and down with work and the baby is getting up to refill his beer. All he has to do is fill this giant beer mug up once, and he can relax all night without needing a refill. Who knew a beer gift could do so much for a guy?

He Can’t Wait to Meat His Child Every dad needs to be equipped with his own set of custom grill tools. No matter how busy he gets when he becomes a parent, he’ll always find time to be out on the grill. Make his time cooking food for friends and family even more special with his very own matching set of grill set. He’ll always have a smile come to his face when he sees the engraved box holding his favorite spatula, tongs, and fork. He knows once he opens that he’ll have some delicious BBQ on a plate in just a short while!

A Gift He’d Pik Himself As a first-time parent, time management is hard. Things like flossing can get lost between daily duties and the baby, get him this Water Pik as the baby shower for dad. Using this gift, he can quickly clean his gums without all the hassle of actually flossing. Just spray some water between his teeth and he’s done! He can think of it like power washing his mouth, and who doesn’t like having clean teeth? The perfect way for a dad to start off parenthood is with a gift that takes him right to the “dad zone,” which is exactly what this whiskey stone box set does! The personalized keepsake box is filled with whiskey stones and glasses which are ideal for having a toast at his dadchelor party! Give him the perfect way to enjoy his liquid energy with this coffee gift set! The first year of being a dad may cause him to lose a few dozen hours of sleep, but thanks to this coffee set he’ll be alert and awake both at home and at work! The mug is the perfect personal gift for at home cups of Joe, while the growler is ideal when he is going to work on or the go!

Stress Relief for Him Being an adult in general is stressful, but when you add becoming a parent on top of that, it becomes a whole new ball game. At the baby shower for dad, get the new father the gift he’s always thought about but never bought with his own massage cushion. Perfect for his chair at home or the office, this gift will give him the relaxation he needs to keep his stress as low as possible! Have a toast to his first child with a whiskey gift set that ensures he’ll be a great dad. He’ll immediately feel like the best “Papa Bear” around when he gets to enjoy a drink from his custom decanter and glasses. Add in a bottle of his favorite whiskey and he’s got a great gift for the baby shower for dads, and one that he can enjoy as his kid grows up!

Beer for the Best Dad Get him a dad gift that is perfect for unwinding at the end of the day. Thanks to your gift box, he can pour his favorite pint of beer into his own mug, and even have a keepsake box for storing some of the best memories of his first child. This mug set is the perfect new dad gift because it allows him to nostalgically collect keepsakes while also having a great gift to decompress after a long day of being dad.

A New Father Gift that Isn’t a Gamble A great gift for a fresh father is his very own poker night set. This gift is the perfect excuse to get him away from the duties of fatherhood a few times a month, and it also gives him and his buddies sometime to catch up, blow off steam, and have a great time. They’ll love playing hand after hand, while they know that the dad of the group isn’t here to merely play around. In fact, his cigar glass will make him look like the ultimate card shark.

For the Best Dad World’s best dad mugs and posters are cool but making it an interactive sign with his favorite beverage will be the coolest thing anyone has ever gotten for him! He can fill the holes with his favorite brand or maybe even place beer caps from specific celebrations inside; the possibilities are endless! Plus, how could he not feel like the best dad in the world when he sees this sign every day? Create a keepsake he’ll never forget with his own personalized story book! He’ll love this gift, and his kid will too! He can make it their bedtime story, or a cool thing to show his kids as they grow up. Putting his child inside a story book will make becoming a father feel even more magical.

The Perfect Kitchen Gift for Dad Make sure that at the baby shower for dad, his gifts are super-useful. This cutting board won’t just bring back some Top Gun nostalgia, it’ll make his life a lot easier. As a parent he is going to have a lot more time in the kitchen preparing food for himself, his wife, and his child; so, make his meal prep efficient and fun with his own personalized cutting board!

Prepare Him for Anything An ammo can filled with the accessories you know he needs for fatherhood is the perfect new father gift. This gift set will let him enjoy his favorite whiskey, yet have him prepared for anything that comes his way thanks to his trusty hatchet. As a bonus, his awesome personalized ammo can will be a great box to store many of his child’s firsts, more dad accessories, or even as bullet storage for when he goes to the range!