Make no mistake: when I decided to do a review of the Applebee’s happy hour, I thought it would be funny. Every intention would be made to order obnoxiously named drinks and uber-basic food. A post full of punny criticisms and elitist references to decor that looks like a clearance sale at HomeGoods. However, I was pleasantly surprised by happy hour at Applebee’s, and just might return someday. Especially if I find myself staying at, say, a La Quinta in an unfamiliar city with no rental car and a few hours to burn. With plenty of value-priced bar food and drink specials that are hard to ignore, here’s how to make Applebee’s happy hour a day-drinking extravaganza. 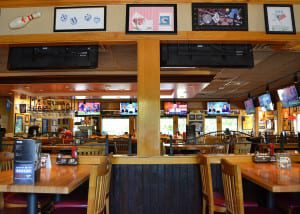 Our Local Applebee’s at 3:45pm on a Tuesday

We turned to good old Google Maps to find the closest Applebee’s. Luckily, there was one about a 15 minute drive from our office. The atmosphere at this location was exactly as I expected. Applebee’s happy hour times are from 3:00pm to 6:00pm, and we arrived at a quarter to 4. There was no staff in sight, but there were two women sitting at a booth talking about the last time they ate at Outback. The entire place was empty, other than them. This is great if you are headed out with your whole squad, as you will never have to wait for a drink. If you are flying solo, you’ll need to embrace that stoic loner vibe. Anyway, after two or three minutes, a hostess showed up, said she hoped we hadn’t been waiting long, and took us to our seats. My favorite decorations were the bowling pin screwed to the wall with visible drywall screws, and the sno-cone cups inverted over the top shelf liquor bottles. We had a few laughs and perused the menus while we waiting on our server to arrive. 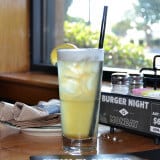 We started with drinks, of course. An ounce of liquor is worth a gallon of…something. The Applebee’s cocktail menu is pretty surprising, with a liquor selection that seemed larger than many other chain restaurants. The two happy hour deals available at this location were the “House Margarita” and “House LIT.” Yes, please! The House LIT was not as weak as I expected for only $3.50. The taste of sweet and sour mix overpowered the booze, but you still got glimpses of alcohol flavor from time to time. The color was interesting, sort of like someone accidentally refilled your glass of Mellow Yellow with Dr. Pepper, but what counts is that it tastes good, and it was, in fact, 100% just fine.The House Margarita was better, and far from being the worst margarita I’ve ever tasted. It was very salty, so if you don’t like heavy salt be sure to mention that when you order. At $3.50 a pop, it was one of our favorite Applebee’s happy hour specials. 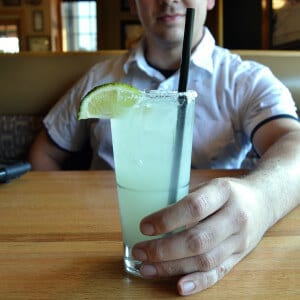 After a few drinks, it was time for bar food. Happy hour is no place to order an entree, so we went for the “Build Your Sampler – Choose 3.” The Applebee’s food menu has about 16 “apps” to choose from, and aside from the eye-roller-but-kind-of-cute abbreviation, most of it looked pretty good in the pictures. A variety of flavors and cuisines are offered, an around the world in 80 bites sort of thing, and served family style for sharing. There is a weird limit to the number of small plates you are allowed to have per sampler, but I’m sure if you smile at the server you can get around that rule. 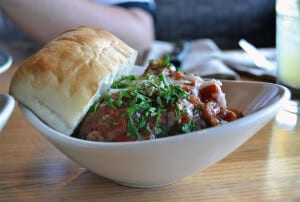 First we tried the Kobe-Style Meatballs. I had never heard of anything being “Kobe-style” so I had to look it up on my phone. Apparently it is a real thing, and involves cross-breeding Japanese Wagyu cattle with American Angus. The taste and texture, to me, seemed like a blend of pork and beef, although I could not find any source that actually states what kind of meat is in this recipe. I suspect that the presence of hybrid beef is limited. But if you never had a problem with mystery meat day in the school cafeteria, then definitely try these. The topping, listed as “pomodoro sauce” is tasty, and a big upgrade from the canned spaghetti sauce you might get at a regular bar happy hour. 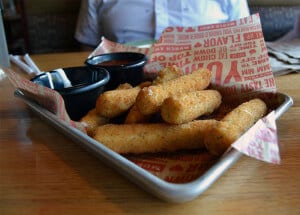 On to a highly traditional type of bar grub: fried cheese sticks! Mozzarella sticks, in this case, and they were perfectly cooked. If you’re looking for something fancy, this isn’t it, but in a high stakes fried cheese pageant, I’d give these mozzarella sticks a solid 8. Maybe a 9, depending on swimsuit and formal wear. The bruschetta, a-hem, pomodoro sauce from the meatballs was perfect as a dipping sauce. 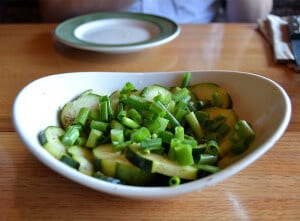 Next, we tried the Homemade Sweet & Spicy Pickles. Since we had our minds on bar food, I expected these to be fried, but they were not. They were fresh, cold cured, pickled cucumbers– fresh, cool, and perfectly marinated. You undeniably get the sweet and spicy, along with dill and freshly chopped green onions over the top, which was a very nice touch. The portion size was generous, and we ate every single bite. The crisp flavor was an excellent alternative to the indulgent, savory fried options. 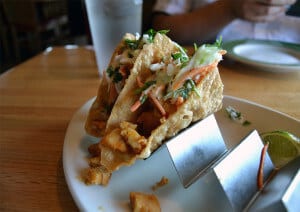 To round out our nibbles from the Applebee’s food menu, we went for the Grilled Chicken Wonton Tacos. This example of food fusion overload was hands down the best dish of the day. You get the familiar flavors and textures of a Chinese egg roll, but made with fresh chicken and coleslaw, and a seemingly freshly fried shell. Seasoned with cilantro, this American-Asian-Mexican combination is delicious, and deserving of the taste buds in this melting pot we call the USA. Food prudes should probably stay away. 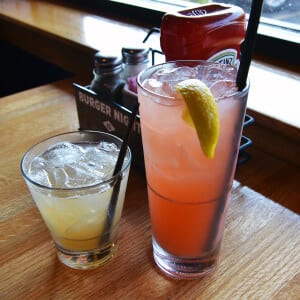 Enough about food. It wouldn’t be happy hour Applebee’s style, or any style, without lots of drinking. Having drunken exhausted ourselves on the two drink specials, we moved on to the Applebee’s cocktail menu proper. Being big whiskey fans, we ordered the Cider Bourbon Infusion. Said to be made with Jim Beam Apple Bourbon, honey, and lemon, it basically tasted like a whiskey sour. But I’m not mad at it. A whiskey sour is a perfectly good cocktail for novelty dance clubs and spontaneous day drinking. The menu also described it as having a “partial cinnamon sugar rim,” which it did not include. This modification is probably why it didn’t seem super cider-y to me, but hey, give me some bourbon at 4:30pm and I’m probably going to be happy no matter what. We also tried the Fireball Whisky Lemonade. Ingredients included Tito’s Handmade Vodka, strawberry, lemonade, & Fireball whisky. I didn’t see an actual strawberry, so I presume the ingredient list is referring to some sort strawberry flavored drink mix. All the promised flavors were present, and it was a super simple & tasty cocktail. I’m a big fan of finding creative ways to use Fireball, and this could easily be turned into a tasty party punch for a crowd. 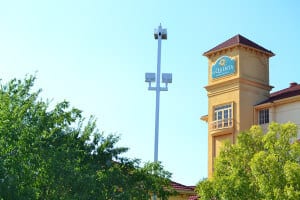 The View from Applebee’s Restaurant

Overall, it was a positive experience. If you’re looking for restaurants with happy hour deals, Applebee’s should be your on your list. It’s not cool, the waiters might be MIA, and anyone who’s watched an episode of Chopped could probably re-create the food, but that’s not happy hour. We’re trying to get buzzed before 5, here! With appealing drink specials and respectable bar food, it’s worth a visit.