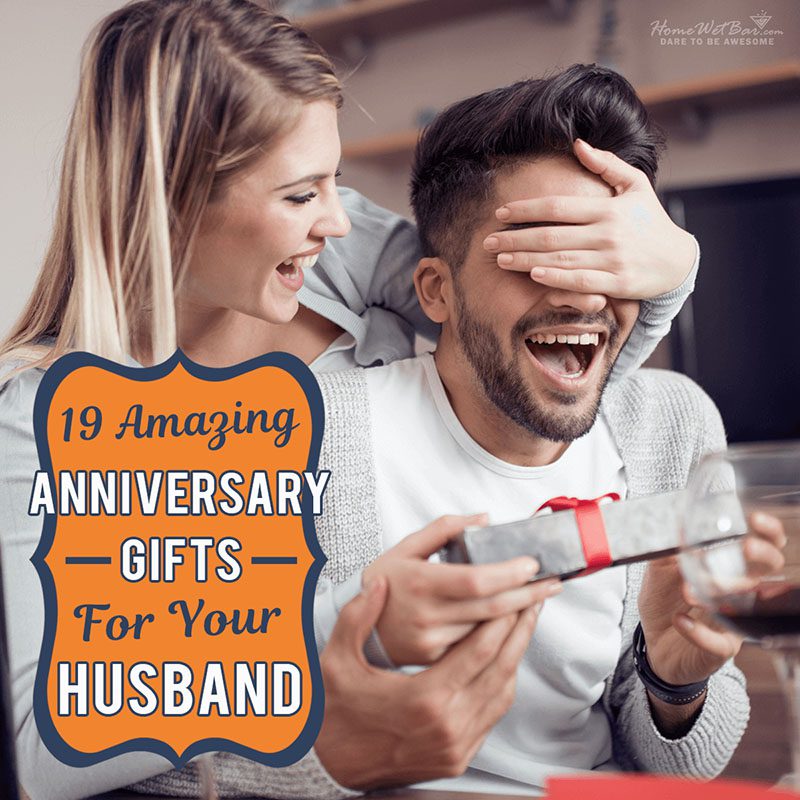 19 Amazing Anniversary Gifts for Your Husband

These Awesome Anniversary Gifts for Husband Will Make the Most Out of Your Anniversary:

One of the best anniversary gifts for your husband is something that celebrates his love of beer. These personalized snifter glasses are almost miraculous with how they bring every aroma of a beer to the forefront before you even take a sip. Once he gets a chance to use this set, he’ll never want to drink from a pint glass again. You can even get a brewery’s variety pack so he can sample how well these glasses perform. Talk about a great set of anniversary gift ideas for husband!

Ship in a Globe Decanter Set

No home or office is complete without a decanter. This globe decanter and glassware set is one of the most creative anniversary gift ideas for your husband. It’s a striking piece that stands out from a standard decanter. It’s ideal for storing any type of liquor. Upon closer inspection, your husband will love the “ship in a bottle” design in the middle. The matching glasses are just the icing on top. With a set of two, he’ll be ready to share a drink with you this anniversary from this gift. In fact, this is so striking you could even use it for something as monumental as a 10 year anniversary gift for him!

You’ve been with your husband long enough to know how much he appreciates a well-brewed beer. That’s exactly why he will appreciate the fine craftsmanship of a traditional ceramic beer stein. Drinking beer doesn’t get better than this. Seeing the way the head rests over the lip is an enticing experience your husband will never tire of.

After years together, you know your husband would conquer a mountain for your relationship. Celebrate his determination with this Matterhorn whiskey glass. This is one of those cool anniversary gifts for your husband that adds an element of class and fun to the way he enjoys his spirits. You can even engrave it with a special message just for him.

All the Essentials Gift Set

Want to really treat your husband this anniversary? Get him a personalized box with all the essentials he needs to treat himself. Fill the box with a few cigars and a miniature bottle or two of his favorite liquors. You’ll be sure to see the sparkle in his eyes after he looks at you when he opens this fantastic set of anniversary gifts for husband. Once the kids are in bed, dad will take out every item in this box to enjoy a nice cigar after a long day.

Turn a Song into Visual Art

Want a truly original gift this anniversary? Soundwave Art has countless items to customize for your husband. You could get him a picture of your telling him how much you love him after all these years or you can find a soundwave of a song that brought the two of you closer together. The possibilities are endless. They even work with your phone so he could play the message anytime he wants.

In all your time together, your husband still loves to find ways to impress you and the family with his culinary skills. If that sounds like the man you married, a personalized cutting board is a great gift to show him just how much you appreciate the meals he’s prepared for you over the years. This cutting board even has a convenient handle, making it the perfect cutting board for prep work before throwing something on the grill. If your man wants to make you a special anniversary dinner make sure he gets this gift first. Even the kids will appreciate their father striving to make them homecooked meals more often.

Does your husband like craft beers? This Marquee engraved growler set is one of those wonderful anniversary gift ideas for your husband that he can have endless fun with. He can take the growler to his favorite breweries and get it filled to the brim. He’ll now be able to take his favorite craft brews with him wherever he wants. No longer will he be burdened by the limited selection at the local liquor store. With two glasses, he’ll able to share a drink with you or his friends thanks to your awesome anniversary gift ideas for your husband.

277+ BEER GIFTS FOR YOUR ANNIVERSARY>

If your husband is a wine lover consider elevating his vino with a stylish decanter. This anniversary gift will aerate any wine that he prefers, allowing the tannins to take effect, and unleashing the full-bodied flavor in a glass once it’s poured. Even the cheapest bottle of wine he enjoys will taste infinitely better after he uses his cool, new decanter.

Self Grooming Kit for Husbands

Get one of those anniversary gifts for your husband that changes the way he shaves. Shaving a beard should be an experience. Gentleman Jon has everything your husband needs to turn shaving from a chore into something he looks forward to doing. This is the kind of gift that guarantees he’ll look his sharpest before you guys go out to celebrate the rest of your anniversary.

There’s a certain kind of man that loves to craft cocktails and serve them for anyone who is even the slightest bit curious about his concoctions. That’s why this is one of those anniversary gifts for your husband that’s he destined to fall in love with. Personalized just for him, and with a sleek gunmetal finish, no one in your home will ever hold an empty cocktail glass with this stainless steel cocktail shaker. Just be prepared to become his official taste tester for each new drink.

Want a gift within a gift this anniversary? Your husband will marvel at the craftsmanship on this engraved wood box. His imagination will immediately wonder what he should store inside. But make sure he opens it and sees a set of classic whiskey glasses and stainless steel whiskey stones. He will marvel at quickly his favorite spirits cool with the stainless steel stones. He’ll be sure to have you join him for an anniversary toast with this clever gift.

The cocktail glass has come a long way. These stainless steel tumblers not only have an awesome modern look, but they’ll also keep drinks cold for hours on end. If your man loves mojitos, Harvey Wallbangers, or a simple Jack & Coke, this is a perfect anniversary gift for your husband. It even goes great with the cocktail shaker above.

Looking for a gift for a tech head? An Oculus Rift is an incredible gift to get him this anniversary. Nothing can mirror the experience of an immersive virtual reality game. With the technology growing at exponential rates, the potential with this gift is limitless. He’ll think he’s a master archer or enjoy walking the bridge of the Starship Enterprise. This is an anniversary gift he’ll be bragging to everyone about the next day.

Some people think the secret to a successful marriage is to not sweat the small stuff. This lesson was really emphasized when you had kids. You and your husband know the real key is sharing a nice drink together whenever you get the chance. Have a drink ready to share with your husband the moment he unwraps this wood sign for your anniversary. It doesn’t matter where it goes in your home, it will be a pleasant reminder of the years you two have shared.

Your man has been running on coffee since the day you met him. Don’t let him get drained halfway through his day. This coffee growler set is an ideal anniversary gift for your husband if he needs more than a cup to keep him going full steam. He can take his favorite coffee with him to the office or when he’s in the great outdoors. There’s even a matching coffee cup for him to use at home. You could even toss in a bag of freshly ground coffee to make this anniversary gift extra special.

One of the things that first pulled you toward your husband was his manly allure. Show how much you still revere that aspect of him with one of the manliest anniversary gift ideas for your husband out there. A custom ammo can from the U.S. military filled with pint glasses, flask, and an axe will keep your husband entertained for hours on end. The pint glasses will be his choice for anything he drinks. Just make sure he remembers you’re supposed to be celebrating your anniversary before he starts seeing how well he can throw the axe.

Top of the Line Soundbar

TV’s have gotten thinner and thinner. It’s great, but the sound quality has suffered. This is one of those anniversary gift ideas for your husband that will make him feel like he’s at the game or watching a movie in the theaters. This Polk Audio sound bar not only has unmatched sound quality, but can even be integrated with your television to make it Alexa compatible. Your husband will love being able to play a show or song with just a voice command. Don’t be shocked if the first song he plays is the one where you shared your first dance as a married couple at your wedding.

Any guy with discernible taste knows the importance of a decanter. It doesn’t matter if you’ve been together for a few years or have spent decades together, no guy should be without a decanter. This decanter set has a timeless style that works in any home or office. Your guy will love finally having a way to display his favorite spirit instead of shoving in the back of some cabinet. You two can even enjoy a glass together as a wonderful nightcap to another wonderful anniversary.