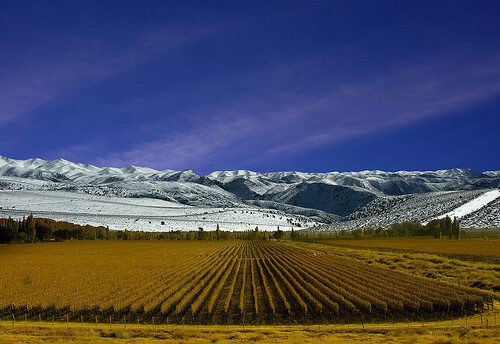 3 South American Wine Regions To Visit Before You Die

But what about South America? While aficionados have been “in the know” for years now, regular wine drinkers – the types who don’t sniff and spit – are just coming around to South American wines.

With Chile leading the charge (and Argentina closing in rapidly) South America offers classic varietals with a new twist.

Well here’s the thing: many grape varieties in South America used to grow in Europe. That is, until Phylloxera – a particularly nasty insect – attacked the roots and literally strangled the vines to death. Also known as the “Great French Wine Blight” it nearly destroyed the entire European wine industry in 1863.

Fortunately, South America remains Phylloxera-free to this day and remains a place for classic varietials like Malbec and Carmenère to reach their full potential.

Of South American countries, Chile and Argentina remain the most popular on the world market (though Bolivia, Uruguay and Peru do produce some fine wines as well).

In this post we’ll look at the most popular varietals found in South America. So pour yourself a glass and settle in…

Located west of the Andes, Chile is a long, thin country running north to south. This accounts for its surprising variety of climates: from the bone-dry Atacama desert to the frozen glaciers of Patagonia.

Their wines are just as varied. Household names such as Cabernet Sauvignon, Chardonnay and Merlot are planted here… but Carmenère – often used as a blending grape in France – is the star red.

Chile’s oldest and most popular wine region, Maipo Valley offers world-class wines among picturesque vineyards. Production began here as far back as 1555 when French varietals were introduced. It was here that Carmenére – along with Cabernet Sauvignon – really took hold and prospered.

Located just 60 miles south of Santiago, the Cachapoal Valley is a wine-lover’s dream. Its Mediterranean climate and mineral rich soil help to produce a wide variety of red and white wines.

Plus, the French have taken notice.

The Cachapoal Valley has long been a favorite among French winemakers, who have bought and/or partnered with Chilean producers. Why? Because wines here reflect those found in the Bordeaux, Alsace and the Loire regions in France.

After witnessing the success of Chilean wines on the world market, Argentinean winemakers sought to follow suit.

Argentina may have started off slow, but they’ve got more wine growing land than most countries and the willpower to make it happen.

How much willpower? Enough to pull up nearly one third of its vineyards in order to replant higher quality varieties for export.

If Chile has Carmenère, Argentina has Malbec. This French grape was often used for blending Bordeaux, though it’s come into its own here as a quality standalone varietal. Another less popular grape is Torrontés, a white varietal similar to Muscat.

This charming, small city (pop: 110,000) is a joy to explore on its own… but when you consider its surrounding  vineyards produce nearly two thirds the country’s wine… well… you could spend a season here and merely scratch the surface.

The principal wine producing areas fall into two main departments – Maipú and Luján. Between the two of them, they offer nearly 700 wineries. Top producers include Catena Zapata (if you visit just one winery, make it this one), Familia Zuccardi and Alta Vista.

So there you have it: three world-class wine destinations in South America. Best part? Wines here are a fraction of what they’d cost in Napa or Burgundy… but are quickly closing the gap in quality. Celebrate your new-found wine knowledge with a glass of fine wine and don’t forget to take a look at our Wine Accessories & Gifts collection to elevate your wine tasting experience.

What do you think? Are South American wines the next “it” place for aspiring oenologists? Why or why not?