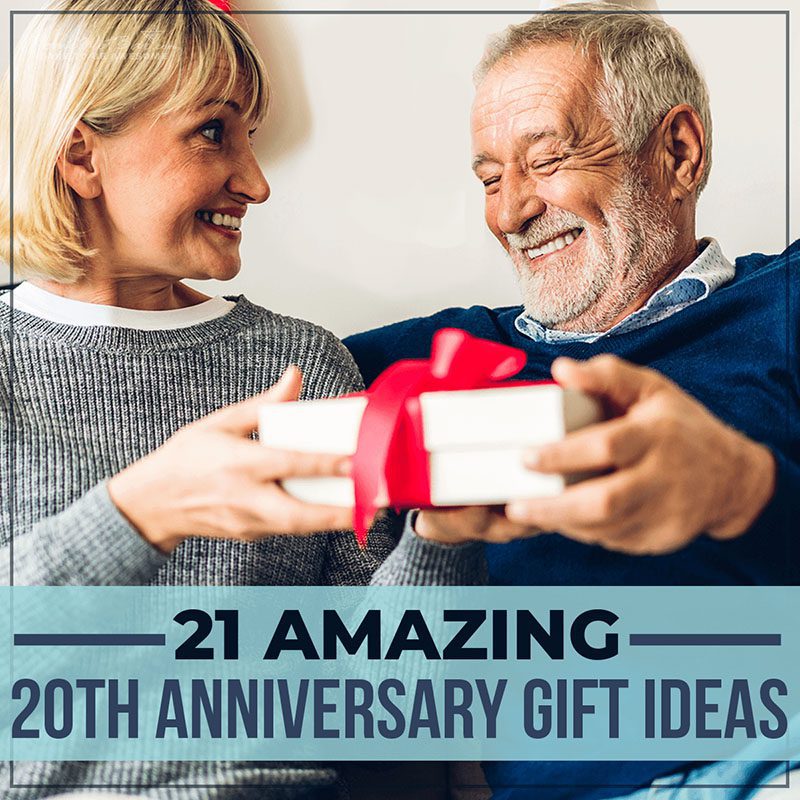 Give Your Spouse One of These 20th Anniversary Gift Ideas to Celebrate Your Special Day:

The twentieth anniversary is a beautiful milestone in any marriage. It means that the couple has spent two loving and committed decades together. That’s why the couple wants to spend some special time together and exchange gifts! You might be wondering, what sort of gift would be good for a couple celebrating 20 years? What would make your spouse feel super loved? Or where to even being? The greatest 20th anniversary gift ideas are one-of-a-kind, sentimental gifts that your sweetheart will want to use to celebrate your anniversary with you and any other special occasion. But don’t fret if that sounds hard to find, we’ve got an awesome collection of unique anniversary gifts to help you find the perfect gift. Whether you’re looking for 20th anniversary gift ideas for a couple or for your spouse, we’ve got you covered with the most unique and amazing ideas!

There’s no chance the couple doesn’t immediately fall in love with this personalized decanter box set! This stunning gift set is just what they need to both commemorate two decades together and enjoy a few celebratory drinks. They’ll feel really special seeing the engraved name and anniversary date on the glassware and box, a reminder of that beautiful day 20 years ago when they became a married couple. They’ll definitely want to use this set every year on their future anniversaries!

Being married 20 years, they definitely will know the advice on this sign to be true! This personalized bar sign is one of the best 20th anniversary gift ideas for a couple because it will look fantastic hanging in their home bar or kitchen in their home. They’ll really like the clever saying along with their last name and year they got married on this handsome sign. It’ll make the bar area feel like their own special place to enjoy drinks together!

A Fun Gift for the Couple

Even after two decades together, they still love to have fun with one another. That’s why you know this custom bean bag toss board will be one of their favorite 20th anniversary gift ideas ever! They’ll love challenging each other to a game of bean bag toss from time to time, and they’ll enjoy looking at the special personalization and reminiscing about their wedding while they do so. They’ll also enjoy playing bean bag toss with guests when they have them over.

Wine Set of 20th Anniversary Gift Ideas for a Couple

This gorgeous wine decanter and glasses set is one of the most impressive 20th anniversary gift ideas ever because of how classy it is. They’ll really enjoy pouring themselves glasses of wine from this decanter while they relax and spend time together on their anniversary and any other special occasion. The couple’s wine will taste delicious after it’s aerated in this beautiful decanter, which they’ll really appreciate.

The modern 20th anniversary is the platinum anniversary, so you know the couple would love a platinum gift! They will be obsessed with this platinum picture frame with a photo of them inside it! Whether it’s a recent photo of them or one from way back at their wedding 20 years ago, they’ll love having it sit in this handsome frame on their coffee table or shelf in their room.

When you’re married to the love of your life, every day calls for a celebration! That’s why this whiskey presentation set is one of the most phenomenal 20th anniversary gift ideas for a couple. They’ll really like having this set on their coffee table or home bar, with incredibly easy access to their favorite drink when they want to share one together on a date night or simply when relaxing and enjoying each other’s company. This anniversary gift set is so incredible, you know you’ll be sipping from it when you and your spouse are unwrapping your 50th anniversary gifts after decades of martial bliss!

Your wife is proud of her wine cellar, wine collection in the kitchen, or home bar. That’s why you know she’ll love this beautiful, personalized wine cellar sign! It’s one of the greatest 20th anniversary gift ideas because it will look fantastic in their home, and she’ll love that her name is on it, making it feel like she’s the proud owner of her own fancy wine cellar. She’ll feel so loved on your anniversary knowing you got her such a unique, special gift!

There’s no way your spouse doesn’t think this gift is the coolest thing of all time! This Bluetooth shower head speaker will make each shower they take more fun than the last! Whether they want to jam out to their favorite 80’s rock the two of you listened to together back in the day, enjoy their favorite true crime podcast, or listen to the baseball game, they’ll be able to do it in the shower with this high-tech gift that functions as a speaker and showerhead.

Even though they’ve been together an entire 20 years, there are some things they’ve never done together. Give them the opportunity to do something new together with this gold bar tool set! They’ll have an absolute blast learning how to create the perfect cocktails together using this brilliant, one-of-a-kind anniversary gift. By the time their 21st anniversary comes around, they’ll be good enough to be professional bartenders!

Surprise the happy couple with the most impressive glassware set they’ve ever been given in their 20 years of marriage! This stainless steel wine tumblers set will immediately become their favorite set to use when they want to enjoy a drink together. It is so good looking that you know they won’t be able to help but want to use it for every drink from now on. That old glass set they’ve had for years will never leave the cupboard ever again once they get this awesome set. The customization of this gift will make it really special for them, and they’ll definitely appreciate how these classy tumblers keep their drinks cold until the very last drop.

The couple has a favorite liquor that you want to surprise them with, but you want your anniversary present to them to feel much more special than just handing them a bottle of liquor. That’s why this engraved liquor bottle gift box is fantastic! Their Don Julio 1942 Anejo Tequila or Chopin Vodka Poland will fit perfectly inside this box. They’ll feel incredibly special seeing the personalization on it, knowing you went to the trouble to find a gorgeous box and personalize it perfectly for them. They’ll definitely want to keep a bottle of liquor in this box for special occasions!

Sometimes, he has a little trouble staying organized. That’s why you know your husband will love a useful anniversary gift that helps him stay organized! This Italian leather watch case is an excellent gift that he’ll be so grateful for since he can store his watches, tie clips, cufflinks, ring, and any other small accessories inside. Now, thanks to your unique gift, he’ll never struggle getting ready in the morning ever again!

For the Proud Family

They’re so proud of the family they’ve built together, so you know a nice family name sign is one of the best 20th anniversary gift ideas for a couple like them. This personalized wooden family sign is perfect! It’ll look fantastic hanging in the entryway, living room, or kitchen, letting every guest know how much they love their family.

This personalized whiskey and wine glass set is the perfect symbol for the couple who knows they don’t always have to agree on everything! When they aren’t in the mood for the same drink, they’ll take out this awesome set so they can use their glasses with matching customization for their drinks of choice. This pair of glasses will definitely be their go-to every time they want to have a drink together!

Chest of Chocolates for the 20th Anniversary

20th anniversary gift ideas that include tons of chocolate? Yum! This chest of chocolates is an awesome gift that the couple will absolutely love. From the Moose Munch popcorn to the coffee truffles to the chocolate mini mints, they’ll love every single treat in this gift, and they’ll be very grateful for it!

There’s no way your wife doesn’t immediately fall in love with this custom charcuterie board! She’ll be stunned by how gorgeous this gift is with its engraving and bamboo look and feel. She’ll really enjoy spending time in the kitchen with you using this board to chop up foods for dinner. When the two of you have guests, she’ll feel like the best hostess ever serving hors d’oeuvres on this beautiful board!

Every couple loves the time they have spent together and they never want to forget even a moment. Help them hold onto each milestone with this custom shadow box! It’s one of the best 20th anniversary gift ideas for a couple that they can use to store mementos. Whether that’s bottle caps, ticket stubs, photographs, flowers, or anything else, they’ll really enjoy keeping each memento inside this box as not only a box of memories but a very unique décor piece for their home.

Your husband is amazing, so you know that he’s incredibly deserving of an amazing 20th anniversary present! This twist whiskey glass box set is a terrific gift idea that he’ll immediately be obsessed with when he opens it up! He’ll be a huge fan of the uniquely-shaped glasses that are perfect for having a nice cold glass of whiskey using the included chilling stones and make him feel super sophisticated. He’ll be so excited to use this gift to have a drink with you on your anniversary!

After 20 years of marriage, it is time to upgrade to the best bedding set imaginable! This Egyptian cotton duvet cover set is one of the most impressive 20th anniversary gift ideas for a couple that will look absolutely stunning on their bed. The unique pattern and aesthetics of this set will make them feel like royalty every time they go to lay down in their bed. It’ll definitely be the 20th anniversary gift that they use the most!

Glass Set of 20th Anniversary Gift Ideas for a Couple

What’s better than sipping on a nice cold cocktail with your best friend and partner in life? Absolutely nothing! That’s why this ice bucket and cocktail glass set is such a phenomenal present that any couple will love. They’ll greatly enjoy taking this set on a picnic, to the beach, or even just by the pool so they can enjoy delicious cocktails together with plenty of ice to ensure they stay cold!