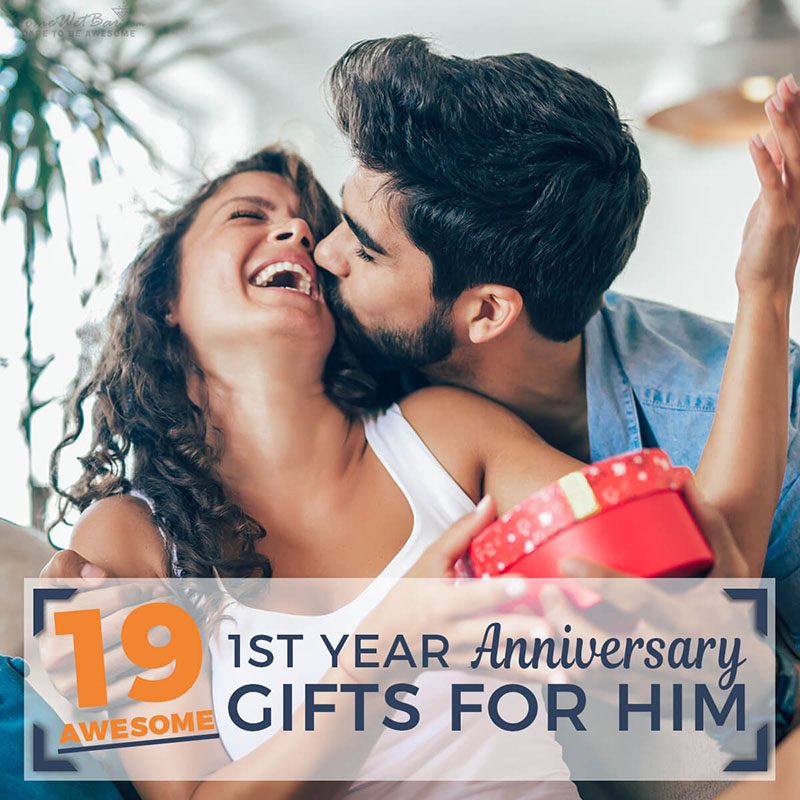 Our One Year Anniversary Gifts for Him are a Fantastic Way to Celebrate Your Milestone Occasion!

If you’re wanting one-year anniversary gifts for him that will be there for years to come then a decanter set with rocks glasses is a fantastic idea. Your guy will no longer have to serve his liquor out of the bottle and into whatever cups are lying around. His liquor of choice will look enticing in the decanter and he’ll experience the full taste with a rocks glass. It’s something he’ll look forward to using every anniversary for every anniversary you’ll celebrate. He’ll be sure to find a prominent spot for it in your home.

The finest one-year anniversary gifts for him will elevate one of his passions. A personalized beer glass snifter set will blow his mind when he samples one of his favorite beers in the glass. Each glass is designed for the drinker to enhance beer tasting, bringing every single note to the forefront. Your boyfriend or husband will love the feeling of drinking one of their favorite beers like it’s the first time. With a set of 4, he’ll be able to share this experience with anyone he chooses.

If you’ve been together for a year, you know your guy’s style and what he needs in his life. If your guy has a man cave, home bar, or bar cart then you know he lacks the sign to tie it all together. Tailor an exquisitely crafted wooden sign to bring everyone together around your man’s favorite place to drink. He’ll love the customized look and that you upgraded the place that he considers sacred in the home.

Your guy has probably been gifted a flask at one point or another. But the kind of flask that’s one of those great one-year anniversary gifts for him should have a display that matches the quality of the flask. Your man will appreciate having a place for his flask that isn’t tucked away in the back of his sock drawer. The set even includes a funnel for easy filling and two stainless-steel shot glasses so he can share with anyone. It would be a fun way to toast your first year together.

Game of Thrones Themed One Year Anniversary Gifts for Him

If your boyfriend or husband loves Game of Thrones and loves drinking beer then he needs an I Drink and I Know Things colossal beer mug in his life for a cool one-year anniversary gift. Blend his love of Game of Thrones, beer, and his love for you all in one gift. He’ll marvel when he pours a beer can into the mug for the first time and realizes it’s not even half full. Have a six-pack on hand and Game of Thrones on the DVR so he can enjoy this awesome beer mug right away.

For your first anniversary, cologne is a wonderful gift to give. Legendary designer, Tom Ford has bottled a scent that your boyfriend or husband will love to wear for every occasion. It doesn’t matter if he’s going to work, about to play a pickup game with friends, or sweeping you away for a romantic evening, he’ll be sure he always smells his best.

A great 1st year anniversary gift is something that sets the tone for every anniversary down the line. Give your man a reminder of how awesome you are with an engraved ammo can gift set. The engraved flask will give him the freedom to enjoy liquor anywhere. The hatchet gives him the excuse to catch up on yard work or go on a camping trip. He won’t be sure whether to put all of his favorite things in the ammo can or display it on the living room mantle.

Moscow Mules have come back in style in a big way. If your man has rediscovered the amazing combination of ginger beer, vodka, and lime juice then he needs his own Moscow Mule mug for one of those amazing one-year anniversary gifts for him. He can’t replicate the cool and crisp sensations of a Moscow Mule from any other type of mug. He’ll welcome the chance to replicate his favorite drink he gets at the bar in his own home. You can even get a pair so he can show off his skills and make you one as well.

A whiskey glass should be as unique as the guy you’ve been with for the past year. This Matterhorn whiskey glass resembles the mountain it shares a namesake with for a bold design that enhances whiskey’s bold flavor. He’ll experience each note just like the Cooper intended. With each sip, your guy will marvel at the way the whiskey appears to crest over the mountaintop.

You maybe the love of your man’s life, but he has another love that will never leave his heart: football. Get your man an unforgettable gift for your first anniversary with a curated collection of items from his favorite team. There’s even a chance for autographed memorabilia. He’ll be ready to go every Sunday before kickoff with this gift. Just make sure he doesn’t put it out before you guys go out to celebrate your anniversary.

You know the importance of your guy’s beard. He steadily maintains it by trimming, using assorted products, and spends more time washing it than the hair on his head. You also know how much he loves craft beer. Bring those two worlds together with this really cool beer lover’s gift set. Two custom pint glasses extoll the power of his facial hair while the beer cap map allows him to collect and display bottle caps from each of his favorite breweries. It even includes a growler for him to get filled at those same breweries. This is an excellent gift to show him that you’ve been paying attention during your first year together.

Making it through your first year together is worth celebrating. Gifting an unmatched complete decanter set with a handsome box would be just another reminder of what makes your relationship so great. Your boyfriend or husband will love having a way to properly store his favorite liquor and having real rocks glasses to enjoy with it. The accompanying wood box can be used to store ties, watches, or even bottles of liquor. This will become his go-to anytime he wants to enjoy some spirits.

Celebrations call for a cigar. Your guy can now be ready for a proper celebration anywhere he wants with this cool one-year anniversary gift for him. He’ll be shocked when he sees this engraved flask not only has a compartment for his liquor of choice, but can also hold his favorite cigars. Have it prepacked so it’s ready to go next time he’s on the golf course, tailgating, or whenever he needs to celebrate with a quality stogie.

Some guys are constantly searching for the best way to cook a steak. Introduce your man to a steak stone for your first anniversary celebration. He can get the same experience as a high-end Hibachi restaurant at home. Not only does the steak stone make perfect steak, but your guy can branch out with expertly cooked swordfish, salmon, and tuna. Have a couple steaks ready when you give this awesome gift.

Countless anniversaries are celebrated with a glass of wine. Your guy might the type that already has a bottle picked out for that special day. Upgrade the way he enjoys his wine with a personalized wine decanter. This 1st year anniversary gift will aerate his favorite wine so he can truly experience the notes and aroma the vintner intended. It even comes personalized to give it that special touch.

If your guy appreciates a fine glass of liquor after work, while watching the game, or with an expertly cooked meal then a Benson rocks glass will be right up his alley. The wide base and sloped shape make this an ideal glass for nosing the liquor to experience its aroma. It’s designed so that your guy can enjoy his drinks neat, on the rocks, or with a mixer. It’s a multipurpose rocks glass that goes great with whatever he prefers to drink.  Customize the glass to turn this into something that will all his friend jealous.

You could close your eyes and easily picture where at least one guitar is in your guy’s home. Give him the chance to play in style with this pick punch. He can craft one-of-a-kind picks that match the same flare he plays with. You may have to warn him what’s off-limits so he doesn’t try and turn your wedding photo into a guitar pick. It might even give him another reason to write you a well-deserved love song.

If your guy loves to grill then he will love a personalized grilling tool set. This is one of those one-year anniversary gifts for him that will have him checking the weather report every day to see if can bust open this kit and grill out for anyone he wants. Your guy will never forget the day you bettered one of his favorite hobbies.

149+ One Year Anniversary Gifts for Him>